J.K. Simmons is playing a what in Terminator: Genesis? 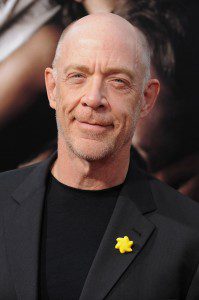 The latest bit of casting news for Terminator: Genesis — the working title for the fifth film in the cyborg-assassin-from-the-future series — has me confused.

The Hollywood Reporter says J.K. Simmons is in talks to play “a weary and alcoholic detective who has followed a bizarre case involving Sarah Connor and robots for more than three decades (since 1984, which, not coincidentally, is the year the original movie, directed by James Cameron, was released).”

To recap: In the timeline of the first two films, Judgment Day took place in 1997, but by the end of the second film, Sarah Connor and her son were able to prevent the nuclear bombs from flying — at least in that year. Then, in the third film, Judgment Day took place in 2004 — this time thanks to a computer-virus-spreading Terminator that came back in time from the 2030s to make sure the war happened.

The fourth film took place several years after Judgment Day, when the war itself was well under way. And that’s where we had left things — until now.

No doubt the fifth film will do all sorts of weird timey-wimey stuff. But one thing that has never existed in any version of this franchise is a world in which detectives are following cases in the 2010s. Even The Sarah Connor Chronicles (2008-2009), a TV show that followed a timeline that was notably different from that of the movies, didn’t push Judgment Day any further into the future than the year 2011.

Oh well. As ever, we’ll just have to wait and see the film to see what this means.

In the meantime, I have been so preoccupied by the non-stop Noah news lately that I have neglected to pay much attention to this franchise. So, just to be up-to-date:

Jai Courtenay is going to play Kyle Reese, the fighter from the future who comes back in time to save Sarah Connor and, along the way, ends up becoming the father of his commander John Connor. Courtenay turns 28 next week; Michael Biehn was 27 when he originated the character way back in the first film.

Arnold Schwarzenegger, who is returning to the franchise in an unspecified role, says the script is “fantastic” and the filming itself will begin next month.

And Moviehole has posted some alleged spoiler-ish plot details which indicate that the new film may have certain things in common with certain other time-travel sequels and franchise reboots. But they still don’t explain the J.K. Simmons character!