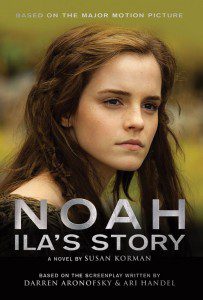 Let’s keep this one brief.

The big Noah news today, of course, is that three books based on the film are now available for purchase: a regular novelization of the movie, a junior novelization that focuses on Noah’s daughter-in-law Ila, and a graphic novel that is based on an early draft of the script and is thus somewhat different from the movie.

To help you get started, MTV has posted an excerpt from the junior novelization, Ila’s Story, which introduces the character as a wounded and orphaned little girl; it also introduces those fallen angels known as the Watchers. No pictures, alas.

For its part, Comic Book Resources has posted an interview with Ari Handel and Niko Henrichon, the co-writer and artist, respectively, who worked on the graphic novel. (Handel also co-wrote and co-produced the film.) A sampling of their quotes:

Henrichon: That’s what we discussed early on while working on the first pages of the project. As I understood it, we were almost aiming for something close to science fiction, both post-apocalyptic and pre-apocalyptic science fiction. That’s why we see all of these metal structures from previous generations, something that may have been there for thousands of years. We wanted to put these things around the story, not specifically explaining why they are there but just to give the atmosphere of a world that has seen many, many generations of civilizations but is crumbling apart when the flood came.

Handel: It had to feel like a complete and prior world that was coming to an end. We also wanted to be true to the text in the Bible by breaking people’s expectations of what they think the story is as they look at it again because those elements that are in the Bible, that are more mythical somehow, didn’t make into the cultural consciousness of what we think that world was when we imagine it. We wanted to shake that up so there is science fiction and fantasy elements in the world that Niko designed but they’re not there randomly. They are there in some way to elucidate the feeling that we were feeling from the text. . . .

Finally, in the story, there is a great comparison of the ark to a seed, which is a tough outer layer that protects the life growing inside. Can you talk about that comparison and how it played into how you designed the ark because again, it’s not the house boast that I have always envisioned?

Handel: Hope is very central to this story and the Noah story. And so is hopelessness. The Creator isn’t going to wipe out all of these things that he made unless he really felt that they were beyond redemption and yet, he saved this small spark. It is both hope and hopelessness together.

In the same way, the ark becomes this tiny, tiny, tiny little capsule of life in what’s essentially a completely dead world of rain and ocean. It’s the tiniest thing that survives. We wanted the ark to feel like that. Even though it’s massive, we wanted it to feel like a speck in the sea.

If you know what a seed does, you know that it is a plant’s way of continuing life onto the next generation but it does it in a way that it can lie dormant for years and years and years and years — they’ve even been able to germinate seeds from thousands of years ago. It’s life frozen or static for a moment. And the ark goes through that same experience. All the life in the world gets held in this shell and until rains stop and the waters recede, it doesn’t know when it is going to be able to grow again. It very much had that feeling of being the seed of life. . . .

Henrichon also reveals that he hasn’t even seen the film for himself yet, so he has no idea exactly how different it is from the graphic novel that he worked on!

In other news, it turns out the film has a rating in the United States now, though it does not yet appear on the MPAA’s official websites. It does, however, appear on the movie’s website and, as expected, it’s a PG-13 — with a cautionary note about “violence, disturbing images and brief suggestive content”.

It will be interesting to see how those corners of the religious community that have complained about the film sight-unseen will respond to that last warning, in particular. Violence itself is easily excused — witness the popularity of not just The Passion of the Christ, but also everything from Braveheart to Gladiator to The Lord of the Rings (and all but one of those films got R ratings for their violence!) — but “brief suggestive content” might get the alarm bells going, for some.

For what it’s worth, I’ve seen the film, so I know what the rating is referring to, and honestly? I’ve seen worse in PG-rated films. If you can handle a James Bond film — and many Christians can — then you can certainly handle this. (And in this case, the “brief suggestive content” involves a married couple! Or at least, as married as they can be in a world that has no churches or priests or ceremonies that we see.)

Meanwhile, Brian Godawa has written the first in a series of articles for The Christian Post on the subject of ‘The Noah Movie: To See or Not to See?’ Godawa wrote a critique of an early draft of the Noah screenplay two years ago, and it has since been picked up by many reporters and would-be critics of the film.

Finally, Cinefiles has a list of facts about director Darren Aronofsky that you “need to know”. I already knew many of them, but I somehow had no idea that Lucy Liu starred in Aronofsky’s first short film, Protozoa, way way back in 1993.

March 17, 2014
Noah news round-up: snubs from church leaders, props from Christians who have seen the film, and more
Next Post