Quick updates on The Leftovers and the Left Behind reboot

Quick updates on The Leftovers and the Left Behind reboot April 9, 2014 Peter T. Chattaway 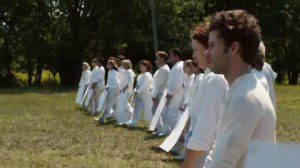 The Rapture stories told by Christians tend to fall into one of two camps: they are either intended to scare the reader or viewer into becoming a Christian, so that he or she will qualify for the Rapture and be spared the terrors of life under the Antichrist; or they are intended to give Christians a chance to do some tribal chest-thumping, as the characters who somehow become Christian after the Rapture actively do what they can to undermine the Antichrist and his evil regime.

Rarely do these stories actively try to empathize with the people who are “left behind” when the Rapture happens. (One of the reasons I love the Daniel Amos song ‘Lady Goodbye’ is because it does try to imagine what that experience would be like.) Lately, however, storytellers of a less obviously religious bent have begun to fill that gap.

Last year, in the apocalyptic comedy This Is the End, Seth Rogen and Evan Goldberg surprised a number of viewers by treating the Rapture not just as an occasion for horror-movie parodies, celebrity humour and coarse jokes, but by asking — with just a hint of sincerity — what a person must do to become “worthy” of heaven, and by recognizing that pride in one’s “worthiness” can, itself, make a person “unworthy”.

Now comes the HBO series The Leftovers, based on the novel by Tom Perotta. A teaser for the series was released a few days ago:

I have not read Perotta’s book, so I don’t know if any of this is explained in there, but I am intrigued by the fact that the teaser emphasizes that only two percent of the world’s population disappears — including at least one baby.

In Christian stories like the Left Behind books, it is sometimes emphasized that all children under a certain age will be Raptured, no matter what their religious affiliation, because they have not yet reached “the age of accountability.” So if all the world’s children were to vanish, you would expect the children alone to account for far more than two percent of the world’s population. (As of three years ago, people under 14 made up 26.3 percent of the world’s population, or over a quarter of it.)

But if Perrotta’s Rapture is more selective than that, then what is it based on? We see a baby disappear in the teaser, but not the mother — so was there some other relative’s religious affiliation that caused the baby to “qualify” for the Rapture?

We shall see, I guess, when the series premieres June 15.

Meanwhile, for those seeking a more conventional sort of Rapture story, the upcoming Left Behind reboot starring Nicolas Cage now has a release date of October 3.

He also said that a sequel will be greenlit before the reboot comes out, though it might have to do without Cage; only Chad Michael Murray, Cassi Thomson, Nicky Whelan are listed among the actors who have already signed on for it.

April 9, 2014Noah interview round-up: co-writer Ari Handel
Recent Comments
1 Comment | Leave a Comment
Browse Our Archives
get the latest from
FilmChat
Sign up for our newsletter
POPULAR AT PATHEOS Entertainment
1