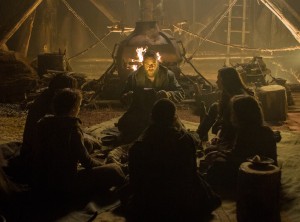 While flood stories are common to many ancient mythologies, the story of Noah per se first appears in the Book of Genesis, which is common to the Jewish and Christian scriptures. So it goes without saying that Christians and Jews have been actively debating the merits of Darren Aronofsky’s Noah since before the film came out two weeks ago.

But the story of Noah is also central to the Muslim faith; there is even an entire sura devoted to him in the Koran. Despite this, there hasn’t been much talk about Muslim responses to the film, at least not in my news feeds, apart from some mention of the fact that certain Muslim countries have banned the film while certain other countries haven’t.

So I was glad to come across this article on the film by Hamid Dabashi at Al Jazeera. Dabashi, a professor of Iranian studies and comparative literature at Columbia University, calls the film “a piercing humanist gloss on the epic Biblical story” and says he appreciates the way it handles “the towering moral dilemma of Noah”:

I saw the film with awe and in admiration, not least because it breaks the monopoly of the institutional claim on a magnificent Biblical story that at first belonged to the Jewish people, but which then entered the Bible and the Quran. Thus, it belongs to billions of human beings – and no particular rabbi, priest, imam or cleric has any exclusive claim on it. We are the people – Jews, Christians, Muslims and (bless them all) atheists and agnostics. This is our story, and we can tell it any way we please! . . .

As a Muslim, as a man, and as a father, I have made my choice, and I am on Aronofsky’s side. I revel in his judicious moral imagination. Without compromising the Biblical prophet’s absolutist convictions in the commandment of his God, Aronofsky has Noah finally succumb to the fragile humanity of his soul. From the moral conundrum that torments his soul, he arrives at a superior conception of his God. His God does not speak to him except through that fragility He had enabled in the first place. And we, as creatures of that very same dialectic, are far richer in our moral imagination through this superior filmmaker than we would be through divisive Christian or Muslim televangelists.

I watched Aronofsky’s Noah with my elder son Kaveh in a movie theatre in New York. For the duration of the screening, I thought that mundane cinema was more graced with Noah’s godly humanity than any church, any synagogue, any mosque and any classroom I have ever known.

A few words of background: Dabashi was born in Iran, a Muslim country that not only permits movies about “the prophets” but has already produced quite a few of them. Dabashi has also served as a consultant on several films; the first time I heard of him was when he participated in a panel discussion of Ridley Scott’s The Kingdom of Heaven (2005) that I attended during the junket for that movie.

So he is definitely in a position to appreciate Aronofsky’s film as cinema, as an act of storytelling, and as something that touches on an aspect of Muslim faith.

I have not yet come across any other Muslim reviews of the film or responses to it, but if I do, I will add them to this post, the same way I have been updating my post on Jewish responses to the film almost daily for the past nine days.

April 17 update: John (Yahya) Ederer, an imam writing for SuhaibWebb.com, says the movie “stayed true for the most part to the biblical Noah (peace be upon him) which, as we will see in the review, is quite contrary to the Qur’anic Noah (pbuh)”:

The biggest concern for a Muslim regarding this movie is the major difference in the depiction of Noah (pbuh) and his message between the Bible and the Qur’an. First and foremost is the source of the conflict. The movie is depicting all of the people as believing in God, The Creator, whereas the Qur’an teaches that Noah’s people had deviated into polytheistic beliefs. Similarly the movie depicts a group of fallen angels whom God punished by turning into rock creatures. The Qur’an teaches that angels, by nature, act in full accordance to God’s will without exception and they are not tested with choice. Thus there is no such thing as a fallen angel in Islam.

The movie’s plot is that God has decreed irreversible damnation for the people’s corruption and iniquity from the get-go. It depicts Noah, not as a messenger of God, but rather as a servant to carry out His will in saving life to start over without humanity. The Qur’an teaches that God sent Noah as a messenger of divine mercy to teach his people pure monotheism and morality in order to save them from destruction and damnation. The movie makes the mission of Noah as an outsider nomad; there with his family simply to build the ark to save the means for future life on Earth without people. The Qur’an teaches that Noah lived integrated among society calling them to monotheism and submission to God. Only after hundreds of years of obstinate rebellion does Noah express his hopelessness in his people and God responds by informing him to build the Ark.

The movie depicts Noah’s people believing in Noah’s warning of a flood and so they devised a plan to survive by taking the ark by storm. The Qur’an teaches that the people mocked and ridiculed Noah while building the ark and even when the rain and floods began they still saw it as coincidence and sought to survive on the mountain. The movie depicts the end of humanity with no followers of Noah whereas the Qur’an teaches that there were many believers who embraced the prophethood and message of Noah and thus joined him on the ark.

The movie is in accordance with the Qur’an in that Noah himself was a very strong and devoutly obedient servant of God. The movie depicts him as a dark, semi-confused man who sees no hope for anyone from the very first time he receives revelation, whereas the Qur’an teaches that he was a merciful man who worked hard calling people to repentance and divine forgiveness. The movie depicts Noah as getting drunk to alleviate the pain of his confusion in understanding God’s will. The Qur’an teaches that all prophets of God are blessed and strive spiritually to moral excellence, and although capable of human error and minor sin; none committed a major sin. They are God’s emissaries on Earth and are the best human examples of piety. . . .

I saw huge benefit in this movie in that it confirmed my faith in the Qur’anic version that fits a comprehensive form of reasonable morality. This movie emphasized why people struggling with faith talk about “the god” of the Bible being illogical and merciless. Obviously we believe that God revealed the original scriptures that now make up the Bible, but it is clear through the miracle of the Quran, historical evidence, and common sense that man has altered its message.

Zainab Rahim, writing for The Platform in the UK, also points out some places where the film (like the Bible) disagrees with the Koran, e.g.:

4) Noah’s son disbelieves from the outset

The Qur’an: In a deeply painful moment for Noah, his only mentioned son dismisses his father’s warning and says he will retreat to the highest mountain to avoid the flood. Him and his mother are considered among the evildoers and are drowned.

“It sailed with them on waves like mountains, and Noah called out to his son, who stayed away, ‘Come aboard with us, my son, do not stay with the disbelievers… Today there is no refuge from what God has commanded…’” The Qur’an (Hud 11: 42-43)

The film: The middle son, Ham (Logan Lerman), is a troubled character who, similar to the biblical narrative, decides to put a backpack on and head off after the deluge is over.

She concludes: “Where Aronofsky’s Noah sinks into post-flood depression, dishevelled and defeated, the Qur’anic Noah sees the outcome of the thousand-year strife finally balanced and turns to God re-assured and enlightened. So although the film may be a more human account of Noah, the Islamic Noah is a more humane account.”

May 6 update: Arzu Kaya Uranli comments on the film for Today’s Zaman:

Actually, verses about what happened to Noah and the society of his time occur frequently in the Quran, and also a whole chapter is devoted to him by name. He is considered the second Adam. The verses that deal with Noah’s story in the Quran emphasize how hard Noah tried to convince people to do the right thing and how he was repeatedly refused.

My disappointment with the movie starts with this point. As Noah, Russell Crowe didn’t make any compassionate effort to convince people to do the right thing and stay away from evil. Not even once did we see him trying. In fact, the setting of the movie can be described as savage, so there was no way to communicate with that ruined land’s barbaric people anyway. Still, I believe it would be a relief for viewers to see and hear God’s merciful messages and love through Noah first, then their denial and eventually punishment.

She concludes: “Well, we must remember that the magnificent story of Noah appeared in the Torah first and then entered the Bible, and that it is central to the Quran. It doesn’t belong to one religious group, but to all human beings. . . . Yet whoever tells the story should stick with the main ethical message, be careful not to twist the facts and embrace the whole of humanity in unity and love.”

June 15 update: Oxford professor of Islamic studies Tariq Ramadan discusses Noah and the “dangers” of “artistic license” with Sheikh Ahmed Haneef on Islam and Life, the program Ramadan hosts for Press TV in Iran. Notably, there is some discussion of the differences between Christian and Muslim sensibilities when it comes to Bible movies, but little if any with regard to Jewish sensibilities.

April 8, 2014
Noah news round-up: a new TV spot, an update on which Muslim countries are banning the film, and more
Next Post