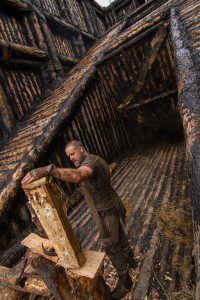 As of this weekend, the film has grossed $243 million overseas, which is more than the $241.1 million that The Passion of the Christ grossed overseas ten years ago.

Noah is currently playing in over 40 territories and has earned $343.3 million worldwide so far. It opens in Japan next month.

Heaven Is for Real landed in the #6 spot with $4.4 million in its fifth week, thereby raising its domestic total to $82.2 million. The film has earned another $2.2 million overseas for a worldwide total of $84.4 million.

Moms’ Night Out slipped 55.9% from its opening last week to earn $1.9 million, thereby landing in the #10 spot and bringing its domestic total to $7.3 million. To my knowledge, the film has not been released overseas at all.

God’s Not Dead earned $764,000 in its ninth week, thereby landing in the #14 spot and bringing its domestic total to just under $59 million. The film has earned another $1.2 million overseas for a worldwide total of $60.2 million.

And finally, as of Thursday, Son of God was still playing in 68 theatres and had inched up to $59.7 million in North America. The film has earned another $8.1 million overseas for a worldwide total of $67.8 million.

May 21, 2014 Damien is all grown up in TV follow-up to The Omen
Recent Comments
0 | Leave a Comment
"This was a refreshing read. I'm an average fan of Hellboy but I'm also a ..."
Andrew Mathews Doug Jones on Hellboy and Christianity.
"Great interview! One thing I've wondered since watching Season 1 is why they didn't include ..."
A.J. Cattapan Interview: The Chosen writer-director Dallas Jenkins ..."
"Earth actually does exist in the Dark City universe. Early in the film when John ..."
Edward Clint Dark City and the ambiguous ending.
"I don't always agree with your opinions, but your reviews are never less than interesting ..."
Laura-Lee Rahn The top-grossing Italian movie of 2019: ..."
Browse Our Archives
get the latest from
FilmChat
Sign up for our newsletter
POPULAR AT PATHEOS Entertainment
1