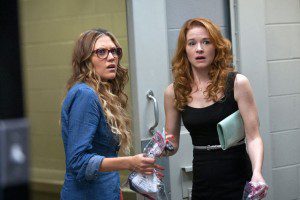 Neighbors, the R-rated hit, opened to $51.1 million this week, which is easily the best non-animated opening of Seth Rogen’s career, and one of the best openings for a live-action comedy ever. (Most of the comedies that have had better openings were sequels or action-comedy hybrids; the few exceptions are Bruce Almighty, Ted and maybe Valentine’s Day and How the Grinch Stole Christmas.)

Meanwhile, Moms’ Night Out, the latest attempt to cash in on the “faith-based” audience, opened to a mere $4.2 million — which is actually pretty good compared to the opening weekends for most Christian movies, but pales next to the $9.2 million that God’s Not Dead opened to earlier this year (and on fewer screens!), let alone the $22 million or more that Son of God and Heaven Is for Real opened to.

Heaven Is for Real, for its part, dropped only 18.6% from last week to earn another $7 million this week, bringing its domestic total up to $75.2 million. The film, which opened three weeks ago, ranked #4 in North America this week and has earned another $1.7 million overseas for a worldwide total of $76.9 million.

God’s Not Dead dropped out of the top ten again in its eighth week and landed in the #12 spot with $1.3 million, thus bringing its domestic total up to $57.5 million. With another $855,000 or so overseas, the film has earned $58.4 million worldwide.

Finally, Noah earned $425,000 in North America this week to bring its domestic total up to $99.8 million, and it earned another $3.3 million overseas to bring its foreign total up to $239 million. The film has earned $338.8 million worldwide so far.

May 12, 2014 Will The Leftovers steal some of Left Behind’s thunder?
Recent Comments
0 | Leave a Comment
Browse Our Archives
get the latest from
FilmChat
Sign up for our newsletter
POPULAR AT PATHEOS Entertainment
1