The Bible follow-up A.D. to premiere next Easter

The Bible follow-up A.D. to premiere next Easter May 11, 2014 Peter T. Chattaway 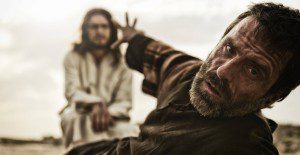 A.D., the follow-up to Mark Burnett and Roma Downey’s hit mini-series The Bible, now has an airdate. NBC announced today that the 12-hour series will premiere on Easter Sunday next year, i.e. April 5. That makes sense, since the series will begin with the Crucifixion and Resurrection of Jesus — territory already covered at some length by The Bible — before it proceeds to show how the Church grew beyond that point. No word on who will star in it yet.

May 10, 2014
Will Idris Elba and Oprah Winfrey co-star in The Shack?
Next Post

May 11, 2014 Box-office update: R-rated Neighbors a smash hit, PG-rated Moms' Night Out disappoints, and more
Recent Comments
0 | Leave a Comment
"I have neither noticed that much. I recenty read a leadership book inspired from Cyrus ..."
Hamid Mortazavi Cyrus the Great — a Persian ..."
""AD" stands for "Anno Domini", a Latin expression meaning "In the Year of Our Lord".So ..."
Peter T Chattaway The Chosen — season one, episode ..."
"Why does it say at the start of episode 3 that it takes place 26 ..."
Desiree Chamberlain The Chosen — season one, episode ..."
"What about Hellboy, The Grudge, Ghoulies, and Anaconda?"
45th Spiderbob Group VGCP When R-rated franchises go PG-13 …
Browse Our Archives
get the latest updates from
FilmChat
and the Patheos
Entertainment
Channel
Related posts from FilmChat