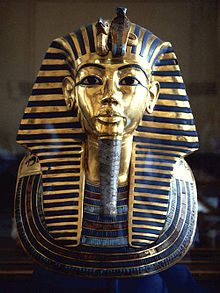 Yet another TV show about ancient Egypt is in the works. Deadline reports that Spike TV and Muse Entertainment are teaming up to produce Tut, a six-hour mini-series about Tutankhamun, the young Pharaoh who reigned in the 14th century BC, and whose tomb was discovered in 1922. The series will cover “Tut’s rise to power and his struggle to lead Egypt to glory, while his closest advisers, friends and lovers scheme for their own nefarious interests.” This series, which has apparently been in the works for several months, is one of a few ancient-Egypt shows that are currently in development, along with the Fox network’s Hieroglyph and Ridley Scott’s HBO series Pharaoh. Egypt-set big-screen movies like Exodus: Gods and Kings and Gods of Egypt are also currently shooting or in post-production, and King Tut himself had a small role in the recent DreamWorks cartoon Mr. Peabody and Sherman.

May 4, 2014
Box-office update: Spider-Man franchise posts arguably its lowest opening yet, God's Not Dead is back in the top ten, Noah hits a new milestone or two, and more
Next Post

May 6, 2014 The BBC is now filming its own version of the Noah story
Recent Comments
0 | Leave a Comment
Browse Our Archives
Follow Us!