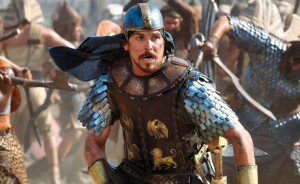 Heads up, anyone who’s interested in Ridley Scott’s Exodus: Gods and Kings: a trailer for the upcoming Moses movie exists, and it has been seen by foreign theatre owners meeting this week at CineEurope 2014 in Barcelona.

Not only that, but the exhibitors in question also got to see “the opening reel of the biblical epic,” according to The Hollywood Reporter. I’m not sure what an “opening reel” is supposed to mean in this day and age — Exodus was shot with digital 3D cameras, and most theatres showing the film will get it on a hard drive rather than as several reels of celluloid — but it sounds substantial, at any rate.

No other details are available yet, but presumably this means it won’t be long before the general public gets to see the trailer, too. If any more information from the CineEurope presentation becomes available, I will post it below.

The actual film is due to come out in just under six months, on December 12.

June 16, 2014
Box-office update: Alone Yet Not Alone fizzles in its first week, Noah comes to Japan, and more
Next Post

June 26, 2014The Leftovers: "The birth of religion in the face of mystery."
Recent Comments
0 | Leave a Comment
"I have neither noticed that much. I recenty read a leadership book inspired from Cyrus ..."
Hamid Mortazavi Cyrus the Great — a Persian ..."
""AD" stands for "Anno Domini", a Latin expression meaning "In the Year of Our Lord".So ..."
Peter T Chattaway The Chosen — season one, episode ..."
"Why does it say at the start of episode 3 that it takes place 26 ..."
Desiree Chamberlain The Chosen — season one, episode ..."
"What about Hellboy, The Grudge, Ghoulies, and Anaconda?"
45th Spiderbob Group VGCP When R-rated franchises go PG-13 …
Browse Our Archives
get the latest updates from
FilmChat
and the Patheos
Entertainment
Channel
POPULAR AT PATHEOS Entertainment
1