Is Ridley Scott’s Exodus the first Bible epic to be shot in 3D? 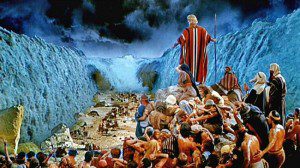 The first big wave of 3D films came and went in the early 1950s, right around the time when Bible epics were surging in popularity — but to my knowledge, the two trends never met. No Bible films were made in 3D back then, nor have any Bible films been made in 3D since then.

Well, that all changes right now, because it turns out Ridley Scott is shooting his life-of-Moses movie Exodus in 3D, and doing so with the same cinematographer who produced such fantastic 3D images for him in last year’s Prometheus. We can only hope that the script they’re working with will be much, much better this time, but it seems a safe bet that Exodus will look great, at least. The IMDb has the details.

I was first alerted to the 3D element by someone named “KEN”, who mentioned it in a comment under my previous post. But it’s also mentioned quite prominently in an interview with John Turturro that The Hollywood Reporter posted tonight. Turturro, who plays one of the Pharaohs, said working on the movie was “eye-opening”:

“I’ve never seen so many cameras or a more efficient orchestration,” said Turturro, who spent two weeks playing [Seti] on location in Almería, Spain where Fox’s Moses epic is in production.

“[Scott] likes to shoot both directions at once, so that in a scene all the actors are being recorded in a single take,” he said. “That’s a pretty unusual approach but it struck me as very economical because he is working with a high budget but maintaining the pace of far lower budget movie by moving quickly.

“He’s a great visual stylist and supremely organized. He’s shooting with 3D, there are lots of visual effects — of the Red Sea parting for example — and it’s a costume pic, but he is involved with every detail.”

Incidentally, scanning the cast list at the IMDb tonight, I noticed at least one name that I hadn’t seen before in connection with this film, namely that of Hiam Abbass, a Palestinian actress who played the Virgin Mary’s mother in The Nativity Story (2006). In Exodus, she will apparently be playing Bithiah, the Egyptian princess who found baby Moses, adopted him, and gave him his name. So, just as Christian Bale once played Jesus and is now playing Moses, so too Hiam Abbass has gone from playing Jesus’ biological grandmother to playing Moses’ adoptive mother.

November 19, 2013 The Garden of Eden gets cameos in Noah and Son of God
Recent Comments
5 Comments | Leave a Comment
Browse Our Archives
Related posts from FilmChat