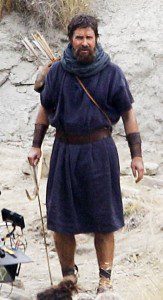 I guess the makers of Exodus couldn’t let the new trailers for Noah get all the Bible-epic attention this week. Christian Bale, currently promoting the crime thriller Out of the Furnace, gave an interview to Hitfix recently in which he let slip a comment or two about Exodus, the currently-shooting Ridley Scott film in which Bale is playing Moses:

“It’s an intriguing piece, because it’s very few people that I’ve met that have actually read the Torah, the Pentateuch, the five books of Moses, all the way through,” Bale said. “Most people read snippets. If you read it all the way through, it’s harsh. It’s really ‘Old Testament.’ And violence in the extreme. He was not a man of any half measures whatsoever.”

Towards the end of the just-published article, Bale adds: “There’s a lot of shocking stuff about it.” And by “it”, he seems to be referring not just to the books of Moses, but to the film that is currently being fashioned out of those books.

Does anyone want to guess at what sort of “shocking” and “extreme” violence this film might have?

If it sticks to the Exodus and the events immediately following it, as Cecil B. DeMille’s The Ten Commandments (1956) did, this film could show how Moses really punished the Hebrews for worshiping the golden calf. (In DeMille’s film, the punishment comes from God, and God alone, without any human agency.)

And if it covers the 40 years of wandering in the wilderness, which DeMille skipped over, this film could show how the Israelites stoned a man to death for gathering wood on the Sabbath (an incident that was depicted in 1974’s Moses the Lawgiver).

I could totally see Ridley Scott zeroing in on stories like those and fleshing them out to show religion’s darker side, as it were. But, given how skittish movie studios can be with material that directly challenges the audience’s comfort zone, and given that this film was originally conceived as a battle epic of some sort, it’s possible that the violence will consist primarily of the battles that the Israelites fought against the Amalekites and others — which is another thing that DeMille skipped over.

As ever, we’ll just have to wait until the film is finished to see what Bale is referring to — which, in this case, means waiting until December of next year.

But given some of the statements that Russell Crowe and others have made about the title character in Noah, it does seem that we could have two films next year that use familiar Bible stories to raise disturbing questions about the relationship between violence and religion, and the extent to which the people who speak on God’s behalf sometimes go too far, even as they get certain very important things right.

November 19 update: Thanks to commenter “KEN” for alerting me to an interview that Bale did with Details recently. An excerpt:

DETAILS: What’s your take on Moses, one of the most iconic men—and beards—in history?
Christian Bale: I prefer to call him Moshe. Otherwise it’s like “Moooooses,” and everyone immediately thinks of Chuck Heston. Ridley and myself, we’d like to present a different interpretation. I’d never sat down and read the five books of the Torah—the Pentateuch—and there is some shocking stuff. Things you certainly never hear in Sunday school. He’s a fascinating guy, with all of the vulnerabilities and extraordinary capacities that come with being very human—almost too human, and quite harsh in his emotions. It’s a raw story when you break it down.

DETAILS: So, are we talking action-figure-ready Moses?
Christian Bale: I certainly wouldn’t want to call it an action film, though he fought a number of battles throughout his life. Let me put it this way: Any of us living today who arrived back then would be scared shitless.

Can’t argue with that.

Incidentally, regarding Bale’s reference to the late “Chuck Heston”: Did you know that they actually worked on a movie together? In 1990, they co-starred in a TV-movie adaptation of Treasure Island directed by Heston’s son. Bale, who was only 15 at the time, played Jim Hawkins, while Heston played Long John Silver.

One more bit of trivia: Joseph Gordon-Levitt provided the voice of Jim Hawkins for the Disney cartoon Treasure Planet (2002), which set the Robert Louis Stevenson story in space, a decade before he co-starred with Bale in The Dark Knight Rises (2012). And the latter film ended by revealing that Gordon-Levitt’s name was Robin. So both the Batman and the Robin in that film were former Jim Hawkinses.

November 14, 2013
Boy has near-death experience in Heaven Is for Real trailer
Next Post