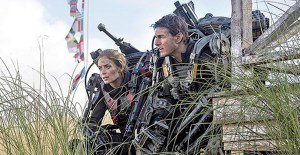 Edge of Tomorrow stars Tom Cruise as a soldier who gets caught in a time loop and finds himself living the same day over and over again. This gives much of the film a feeling of déjà vu, which is only fitting, since many elements in this film are reminiscent of other movies, from the battle scenes of Saving Private Ryan and Starship Troopers to the mechanical suits of Iron Man and Aliens and the endless time loops in Groundhog Day and Source Code. You might spend much of this new film thinking that you’ve seen it all before.

Indeed, Tom Cruise has been in the movie-star business for so long that his latest film feels at times like a callback to earlier Tom Cruise movies. Even the fact that it’s a bit of a pastiche seems like a replay of earlier pastiches, not least because Edge of Tomorrow is the second consecutive film of his — following last year’s Oblivion, which borrowed from many other films itself — in which the Earth is attacked by aliens and Cruise becomes the only man who can do anything about it.

Not only that, but both films also seem to be following in the footsteps of a particular director, however accidentally. Oblivion had a subplot that strongly resembled a subplot in the independent film Moon, which was directed by Duncan Jones, while Edge of Tomorrow has Tom Cruise relive the same day over and over again in an effort to prevent a terrible act of violence, which strongly resembles the plot of the sci-fi film Source Code, which was also directed by Duncan Jones.

In addition to Source Code, many people have cited Harold Ramis’s Groundhog Day as a precedent for the new film, and for obvious reasons — though the films are also rather different, for reasons I’ll get to in a moment. But the one movie that kept coming to my mind while watching Edge of Tomorrow was the Philip K. Dick adaptation Next, which starred Nicolas Cage as a man who can see a few minutes into the future, and who uses this knowledge to avoid being shot or captured, etc.

I thought of that film partly because Cruise plays a character named Cage in the new movie — William Cage, to be precise — but it mainly came to mind because Cruise spends part of the new movie dodging punches before they are thrown and knowing exactly where to step to avoid being seen, just like Nicolas Cage in Next.

And when I looked up my review of that film last night, I discovered I had compared it to yet another Tom Cruise movie, i.e. Minority Report, in which a “pre-cog” who can see the future guides Cruise through exactly those same kinds of steps.

So much for the movie references. Is Edge of Tomorrow actually any good? The answer, I’m happy to say, is yes.

Much of the credit has to go to Cruise himself. On one level, this is a familiar kind of role for him — the callow jerk who eventually mans up and gets the job done — but the fact that he plays both ends of this persona within nearly-identical scenes makes the changes to his character really stand out.

Also, in a summer full of “post-human” films that celebrate visual effects for their own sake, or that jerk us around by putting certain actors front-and-centre in the ad campaign and then killing them off in the first act (I’m looking at you, Godzilla), it’s handy to have someone like Cruise around to ground a film like this from start to finish in an accessible, believable performance.

Also, I have to say that I agree with Jeffrey Wells, who has argued that Cruise became a more interesting and even vulnerable actor in the mid- to late ’90s as his face began to grow crow’s feet, frown lines and other signs of impending middle age. (He turns 52 next month.) That may not be the deepest of reasons to appreciate a film, but film is a visual medium, and Cruise has certainly gotten more interesting to look at.

Credit must also go to Cruise’s co-star, Emily Blunt, who plays a war hero named Rita Vrataski who happens to be one of the few people around who knows what Cruise is going through. She’s tough, she’s determined, and in the end both Cage and Vrataski bring out the humanity in each other. By the second half of the film, I was utterly invested in these characters and their relationship, even though Cage is the only one who “remembers” all their experiences together.

Based on the Japanese novel All You Need Is Kill and written by Jez and John-Henry Butterworth (who worked on director Doug Liman’s previous film Fair Game) and Christopher McQuarrie (who wrote Valkyrie and Jack Reacher for Cruise), the script is clever enough, and amusing when it needs to be. Sometimes it takes us day-by-day through Cage’s experiences, and sometimes it leaps ahead, but we don’t realize this until Cage’s knowledge of his environment is revealed to us (and to Vrataski) in some way. That uncertainty — not knowing whether we are experiencing any given scene from Cage’s point of view or Vrataski’s — keeps us on our toes.

I also appreciate the fact that the film takes place in Europe (specifically, England and France). Far too many movie aliens have landed in the United States, and suspiciously close to national monuments at that. This film is a healthy exception to that rule.

There are a few plot holes.

Cage, at the beginning of the film, is an officer who has never had any actual combat training; his job is to go on TV and promote the war effort on national television. But when he runs afoul of a general who is overseeing a D-Day style invasion of alien-occupied France (Brendan Gleeson), he is arrested, tasered, stripped of his rank and assigned to one of the military units that is getting ready to storm the beaches. All the other soldiers are told that Cage is a deserter, but is it really possible that none of them would recognize him from his TV appearances? At the very least, the general who treated Cage this way was taking something of a risk.

Also, I couldn’t quite buy the idea that Cage would relive each day in precisely the same way. It has been a long time since I played video games with any regularity, but I can remember how maddeningly difficult it was, with the more predicable games, to hit the buttons or move the joystick at the exact moment when I needed to do those things, time after time. And if that was difficult to do for just a few minutes, imagine how difficult it would be to maintain that kind of concentration for several hours, just to get back to where you were before you died and had to start over again.

Also, the film pretty much ignores the “butterfly effect”, whereby even the most minor of changes to the timestream can have significant consequences further down the road.

And this raises a third potential problem: the lack of free will for all those people around Cage. Is it necessarily a given that everyone would make the exact same choices if they had to live the same day over and over again? If they genuinely had free will, then perhaps they would make slightly different choices — which, again, would have potentially significant consequences further down the road.

I do have one moral issue with the film, though it’s one I can set aside for the sake of enjoying the film. Specifically: Cage jumps back in time only when he is killed, and although he does die in combat many, many times, there are also times when Vrataski actively puts a gun to his head and pulls the trigger just to hit the “reset” button, as it were.

Vrataski has, in a sense, earned the right to do this. While she doesn’t have Cage’s time-looping powers any more, she used to have them, and she can remember losing them when she was merely injured and taken to a field hospital. Based on this, she surmises that if Cage doesn’t die at certain points in the story, he will lose the ability to go back in time and start over again, and then he won’t be able to figure out how to save the Earth any more.

Also, our introduction to Vrataski — the first time Cage actually meets her — shows that she isn’t afraid to die herself, if it will help Cage to hit that “reset” button.

Factors like these help to explain why Cage, at least, doesn’t hold it against Vrataski that she has killed him so many times. (Plus, of course, there is the fact that the Vrataski he encounters in any given time-loop has never actually killed him.) Still, if you regard human life as sacrosanct, or if you resist the idea that human life and death can be treated as means to an end, then this should give one pause, at least.

It is also worth noting one of the key differences between this film and Groundhog Day, which remains the time-loop movie par excellence.

In Ramis’s film, the whole point of the time loops was that they were open-ended, and that the Bill Murray character needed to learn to appreciate each moment for what it was. The fact that he eventually comes out of those loops is a bonus, a gift of grace you might say, but not something that he was consciously trying to earn through his own good works, so to speak. (Forgive me if that all sounds a tad theological.)

Edge of Tomorrow, on the other hand, is very much about trying to achieve a goal, and while there are a few scenes in which Cage simply tries to live in the moment — a detour to a London pub comes to mind — the fact remains that most of Cage’s experiences are all about figuring out the next little step on his long, long journey towards defeating the aliens. And it’s not clear that the movie will resonate much for audiences on any sort of spiritual level once that journey is over.

None of that detracts from the film, though. In the end, it’s a really solid bit of popcorn entertainment. And it ends on an absolutely perfect note. It’s been a while since a film left me wanting more, but this one did. I kind of want to see it again.

June 9 update: My wife reminded me last night that a bit near the end of this film echoes a scene from one other Tom Cruise film that I didn’t mention above: