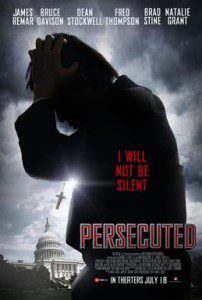 The “faith-based” genre produced another dud this past weekend. Persecuted — in which an evangelist is framed for murder by a corrupt politician, thereby unleashing “an unprecedented era of persecution” — opened to a measly $851,391 on 736 screens this week.

The film ranked #19 at the box office. Four of the films that ranked above it actually played on fewer screens (Think Like a Man Too, Edge of Tomorrow, Chef and especially Boyhood), and the film’s $1,157 per-screen average was the second-lowest in the top 25.

This comes just five weeks after the once-hyped Alone Yet Not Alone opened to $534,626 — on only 103 screens! — before sputtering out with less than a million bucks altogether. (The film had earned $887,851 as of July 2, and presumably not much more since then.)

More and more, it looks like the impressive, even record-breaking box-office hauls of Son of God and God’s Not Dead earlier this year were an aberration of some sort. Even the once disappointing box-office performance of Moms’ Night Out looks positively stellar next to these more recent films. (Noah and Heaven Is for Real also get lumped into this category sometimes, but those films were produced by major studios.)

It will be interesting to see how upcoming “faith-based” releases like The Identical (September 5), The Song (September 26) and Left Behind (October 3) do.

Heaven Is for Real earned $191,964 in its fourteenth week, landing it in the #34 spot and raising its domestic total to $91.1 million. It has earned another $6.5 million overseas for a worldwide total of $97.6 million. It comes out on DVD and Blu-Ray (in North America, at least) today.

And God’s Not Dead earned $6,433 in its eighteenth week, landing it in the #70 spot and raising its domestic total to $60.7 million. It has earned another $1.8 million overseas for a worldwide total of $62.5 million.

Noah and Moms’ Night Out did not appear on this week’s box-office chart at all. The former film has earned $359.2 million worldwide (almost 72% of that overseas), while the latter film has earned $10.4 million (almost all of it in North America).

July 24, 2014 The tallest man in Canada is playing Goliath in a new movie
Recent Comments
0 | Leave a Comment
"This was a refreshing read. I'm an average fan of Hellboy but I'm also a ..."
Andrew Mathews Doug Jones on Hellboy and Christianity.
"Great interview! One thing I've wondered since watching Season 1 is why they didn't include ..."
A.J. Cattapan Interview: The Chosen writer-director Dallas Jenkins ..."
"Earth actually does exist in the Dark City universe. Early in the film when John ..."
Edward Clint Dark City and the ambiguous ending.
"I don't always agree with your opinions, but your reviews are never less than interesting ..."
Laura-Lee Rahn The top-grossing Italian movie of 2019: ..."
Browse Our Archives
Follow Us!