The tallest man in Canada is playing Goliath in a new movie July 24, 2014 Peter T. Chattaway 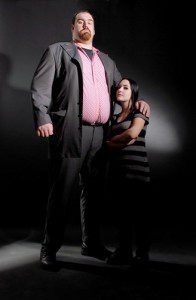 The makers of David and Goliath, which recently finished shooting in London and North Africa, issued a press release Tuesday announcing that the part of Goliath is being played in their film by Jerry Sokoloski, who happens to be the tallest man in Canada.

Estimates vary as to how tall, exactly, Sokoloski is. When he visited the Canadian TV show Breakfast Television several years ago, they measured him at 7’4”, but he said he had been measured “between that height and up to seven feet, 5.5 inches.” The David and Goliath press release says he’s even taller, at 7’8”.

As I mentioned in an earlier post on this film, estimates also vary as to how tall the biblical Goliath was. Most of the earliest manuscripts say he was about 6’9”, but the Masoretic text used by most English translations gives his height as 9’9”. So Sokoloski is either too tall for the part or too short.

Not surprisingly, director Tim Chey — who has promised that his movie will be “biblically correct in every way” — thinks the biblical Goliath was super-huge, so he believes his actor is “about a foot and four inches shorter than the real thing.” Even so, he says it was a “tremendous blessing” to find such a tall actor for the part.

The part of David is being played by British actor Miles Sloman. I have no idea how tall he is, though if historical accuracy is the issue here, then it may bear mentioning that the average man in ancient times was about 5’3”. (So even the shorter version of Goliath would have been a full foot and a half taller than the average Israelite.)

The film is currently in post-production and is aiming for a release in March 2015.

July 22, 2014
Box-office update: Persecuted is another "faith-based" dud
Next Post

July 24, 2014 Our first look at Moses' wife in Exodus: Gods and Kings
Recent Comments
0 | Leave a Comment
""AD" stands for "Anno Domini", a Latin expression meaning "In the Year of Our Lord".So ..."
Peter T Chattaway The Chosen — season one, episode ..."
"Why does it say at the start of episode 3 that it takes place 26 ..."
Desiree Chamberlain The Chosen — season one, episode ..."
"What about Hellboy, The Grudge, Ghoulies, and Anaconda?"
45th Spiderbob Group VGCP When R-rated franchises go PG-13 …
"Not yet, but I might do something like that once Season 2 is complete."
Peter T Chattaway The Chosen — season one scripture ..."
Browse Our Archives
get the latest from
FilmChat
Sign up for our newsletter
POPULAR AT PATHEOS Entertainment
1