Who killed Goliath, anyway? And how tall was he? 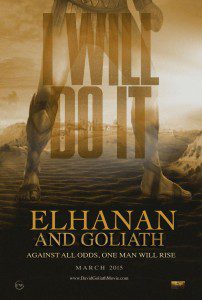 This is too amusing not to pass along.

Apparently a guy named Tim Chey is preparing to direct a $50 million movie called David and Goliath, and he gave an interview to The Christian Post in which he said his movie will be “biblically correct in every way.” (Well, at least he didn’t say “biblically accurate”.)

Clark doesn’t mention it, but the unlikely similarity between the two passages (they both identify the hero as coming from Bethlehem, they both say that Goliath was from Gath and that his spear had a shaft “like a weaver’s rod”, etc.) evidently bothered the author/editor of Chronicles, who revised the Elhanan passage so that Elhanan “the Bethlehemite [bët hallahmï]” now kills “Lahmi the brother” of Goliath.

Most scholars, however, accept that one of the Goliath passages borrows from the other, though they differ on how, exactly, this borrowing took place. To quote from a term paper I wrote on ‘Giants in the Bible’ back in my university days:

It is highly unlikely that any scribe would have taken the victory of the legendary King David and transferred it to one of a handful of David’s mighty warriors. Any details that might have been borrowed, then, would have passed from Elhanan to David.

One theory advanced to harmonize the stories holds that Elhanan was the real name of the champion who, on becoming monarch, assumed “David” as his throne title; this theory was buoyed partly by the discovery that dawidum was a term for “commander” in the Mari texts. This view is not held by the majority of scholars, though, partly because it fails to explain why Elhanan would be counted as one of his own heroes in a passage which seems to have been compiled at an early date, yet uses the name David six times in the space of eight verses without once implying that David and Elhanan were remotely identical (Hertzberg, p. 387). A similar view, which holds that Elhanan’s story was transferred in toto to David at a later stage (as implied in Suggs, p. 335), seems unnecessary, since much of the story of David and his Goliath is actually a story about David and “the Philistine”, who is named “Goliath” in verses that suggest later editing of the narrative. The consensus now is that details of the Elhanan story “attached themselves artificially to an unrelated duel of David’s own” (McCarter, p. 291).

One other problem with Chey’s claim to be making a “biblically correct” version of the story of Goliath is that he insists the giant in his film will be nine feet tall — but there are plenty of manuscripts that indicate he was actually shorter than that:

In any case, the textual evidence suggests that Goliath, while a giant, was originally somewhat shorter than the height given in most versions of the Bible today. While the Masoretic Text and certain editions of the Septuagint do give Goliath’s height as “six cubits and a span”, Josephus (Antiquities 6.171) and a Dead Sea Scroll fragment known as 4QSama both give his height as “four cubits and a span”, as do certain other editions of the Septuagint (McCarter, p. 286). One would certainly not expect copyists to downplay the challenge faced and won by David, thus it seems that Goliath was, in fact, closer to six feet nine inches tall, “a true giant in an age when a man well under six feet might be considered tall” (McCarter, p. 291).

So no matter what Chey does in his film he’s going to be “incorrect” according to at least one of the biblical sources. Being “biblically correct in every way” is simply impossible, unless he goes the Rashomon route and presents a somewhat fragmented narrative in which different Israelites have different memories of that time when they fought the various giants — which would actually be kind of interesting.

But if he does depict Elhanan in any way, shape or form — killing Goliath’s brother Lahmi, perhaps, as per Chronicles — then I will be very, very impressed.

May 16, 2014
Anne Rice's Christ the Lord finally gets the green light
Next Post

May 17, 2014 That comedy about angels and free will is still in the works...
Recent Comments
0 | Leave a Comment
Browse Our Archives
Follow Us!