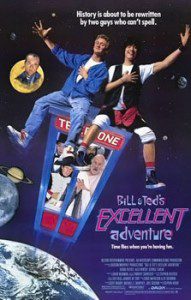 It’s been 25 years since Bill & Ted’s Excellent Adventure first graced our screens, and just a couple years less since the sequel Bill & Ted’s Bogus Journey came along. The past decade has brought us long-delayed revivals of 1980s franchises like Die Hard and Indiana Jones, so naturally, many Bill & Ted fans have wondered if we’ll see a new film in this series, too — and co-stars Keanu Reeves and Alex Winter say they want to make it happen.

For now, they’re bogged down in script development and securing financing for the film. (One hiccup: the characters aren’t particularly popular overseas, and that’s where Hollywood makes its money these days.) But the actors have been quite open about their hopes for it. A few weeks ago, Winter said the film will revolve around a sort of mid-life crisis for the characters, who were supposed to bring peace and harmony to the world through their music but, so far, have not. And now, Reeves has spoken to ComingSoon.net:

CS: The director you guys picked out originally, Dean Parisot (Galaxy Quest) was a great choice. Is he still involved?
Reeves: Yeah, Dean’s re-read it and I think he likes it. It’s kind of like… I call it “gravity,” you have to get this mass together to make it happen. In terms of the writers’ voices being too peculiar, in this case no. I think they’ve really crafted something that’s funny. [Bill and Ted have] been weighed down by the burden of having to save the world by the song, and they just can’t write it. They’re losing their wives and their children, they’re losing their families.

CS: Just getting too wrapped up in their own dilemma?
Reeves: Yeah, they’re just like, “Dude, we have to write the song!” The future comes back and says if you don’t write the song by this certain time the universe is going to unravel and history and everything is going to change and dinosaurs are gonna walk the Earth. Jesus is playing baseball! All sorts of weird things start unraveling and wormholes are twisting. We have to kind of bring order back, and it’s connected into bringing our families together by writing a song.

The original film featured historical figures who were ancient (Socrates) and religious (Joan of Arc), and of course the sequel featured Death quite prominently in its advertising. (Wikipedia tells me that Bill and Ted also encountered Satan and maybe even God in the second film, though I honestly have no memory of that. What can I say, I haven’t seen either of those films since they were brand new.) 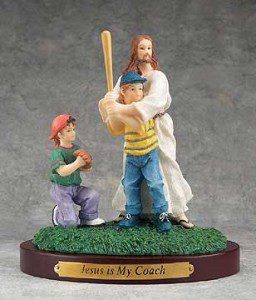 In any case, it doesn’t look like the films have ever featured any biblical characters before — at least not any human ones. So if this third film really does show Jesus playing baseball, it could be breaking new ground, as far as that goes.

This plot element also raises the interesting question: will Jesus do anything else in this film besides playing baseball when the universe comes undone? If Bill and Ted do restore order to the universe with their music — thereby separating Jesus from his baseball bat or glove — will they, in some sense, be saving Jesus?

October 13, 2014The Omega Code and the mainstreaming of Christian film
Recent Comments
0 | Leave a Comment
Browse Our Archives
Follow Us!