Today is the last day of the Vancouver International Film Festival, and I regret to say I didn’t catch as much of it as I’d hoped. Of the sixteen days that the festival ran, there were six when I simply didn’t make it into town, and on a few of the others I was lucky to catch a single film. But no matter. Here are a few more capsule reviews, one of which is for a film that will get a “repeat screening” over the weekend. 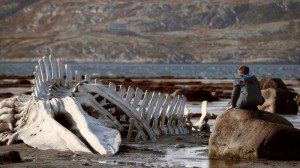 Many people were shocked when the powers that be in Russia chose Leviathan to represent that country in the Best Foreign Language Film race at next year’s Oscars, and it’s not hard to see why they were shocked: the film is a pretty bleak depiction of life under a government that is — by turns, and depending on the official in question — heartless, greedy, thuggish, hypocritical and corrupt. Written and directed by Andrey Zvyagintsev (The Return, Elena), the film concerns a man named Kolya who lives in a small coastal town on the Barents Sea, who wants to save his home from an eminent-domain-like seizure by the local mayor. When the movie starts, Kolya’s lawyer, an old friend visiting from Moscow, is convinced that they can win — partly because he intends to blackmail the mayor. At first, things seem to be going their way. But then things begin to go wrong, badly wrong. The title refers to a sea monster that is mentioned in the Old Testament, most notably in the Book of Job, where the very wildness and untameability of that creature is cited by God himself as evidence of how the ways of God — including the fact that he allows good people to suffer — can never be fully understood by human beings. But in the film, the central visual motif is that of a skeleton left behind by a beached whale after its carcass has rotted in the sand. The very aliveness of the biblical Leviathan is replaced, here, by the utter deadness of that skeleton. And so, too, there is little sense that the film’s put-upon protagonist will receive any sort of answer for his troubles. It also doesn’t help that the local bishop, who seems to be fairly well-off, is chummy with the mayor, or that the local priest, who lives in a more run-down sort of building, does what a lot of Christians do when talking about Job, and skips past the suffering as quickly as possible to get to the “happy ending”. Zvyagintsev has crafted a fairly damning portrait of secular and religious power in Russia (note the picture of Vladimir Putin behind the mayor’s desk, or a glimpse of the Pussy Riot controversy on a TV set), and some of the images are quite powerful, particularly near the end. Plus he makes great use of Philip Glass over the opening and closing scenes. My one quibble is that two characters embark on an extramarital affair that seemed, to me, to come from out of nowhere; the fact that it was necessary for the plot made its out-of-the-blue-ness stand out all the more. But maybe that’s the sort of thing that will make more sense to me when I see the film a second time — which is something I certainly hope to do. (The film is currently scheduled for theatrical release in Vancouver in January.) 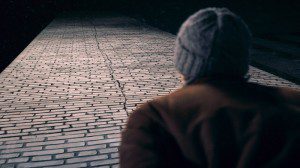 If Leviathan doesn’t make you glad you to be living anywhere but Russia right now, then The Fool should do the trick. The title refers to Dima, a plumber who is so honest and conscientious that even his own wife and parents call him “naive”. One night he goes to investigate a busted pipe in an apartment building filled with drunk, abusive husbands and pot-smoking teens, and he discovers that the building itself is beginning to twist on its foundation and could even collapse within 24 hours, taking its 800 or so residents with it. (The image above shows Dima looking at one of two giant cracks that run the full height of the building.) Rather than shrug the problem off or wait until morning to alert the authorities, Dima goes straight to a birthday party for the mayor and demands that she evacuate the building. The mayor, in turn, summons the heads of the various civic departments — most of whom, like her, have had a wee bit much to drink at the party — and they immediately spend more time pointing fingers at each other than trying to address the problem. (Pretty much all of them have embezzled money that was supposed to go to public-housing repairs and similar services.) Written and directed by Yuri Bykov, The Fool doesn’t quite have the aesthetic chops of Leviathan — the dialogue is a little more expository and on-the-nose, for one thing — but it’s engrossing and even somewhat suspenseful, and in some ways it is even more bleak than Zvyagintsev’s film. The final shot in particular is going to stick with me for a while. Definitely worth seeing. 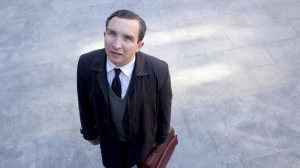 I went straight from The Fool to a screening of Still Life, and while the two films were different in just about every conceivable way, they had at least one striking thing in common: a protagonist whose sense of integrity compels him to do something on behalf of people who cannot reward him — in this case because they are already dead — and whose sense of purpose mystifies his bosses, who think he should just quit. The marvellously subdued Eddie Marsan plays John May, a British civil servant whose job requires him to track down the next-of-kin whenever some poor soul dies alone. May, who is something of a loner himself, is so committed to the dignity of these total strangers that he arranges funerals for them, even though he is likely to be the only person in attendance, and when he does find estranged friends and family members, he tries in vain to get them to put aside their grievances with the deceased just long enough to pay their last respects. Early on, May is told that he is being laid off, so he spends his last days on the job trying to find just one person who will attend the funeral for a man who died in May’s own neighbourhood. The way May goes about his empathetic detective work is quietly touching and occasionally even quite amusing, and the way he pays attention to the imprints left by the deceased in their beds and chairs is poignant enough, but I was completely caught off guard by how deeply moved I was by the film’s final minutes. Some might find the film a tad manipulative, but for me it was a ringing affirmation of the fact that people’s lives matter even when we don’t know them, and even when all possibility of knowing them has been taken away from us by death. The title might refer to the photos left behind by the dead, or to the stillness of a body that once was alive but is no more, but I think it also refers to the fact that a life which has come to an end is still a life that warrants our attention. As I’ve said before, if the dead don’t exist now, then they never really did in the first place, but if they did exist, then in some sense, they still do, and the dignity of those lives — as flawed as they might have been — still merits our respect. This is a film which gets that. 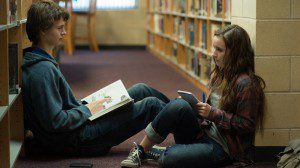 What on earth happened to Jason Reitman? I liked his debut satire Thank You for Smoking, and I loved his follow-up Juno. Then came Up in the Air, which was a decent bit of Oscar bait, and Young Adult, which I remember liking, partly for the way it tackled some of the same themes as Juno but from a very different angle. Some people, however, did not like that film, and Reitman’s star fell even faster with the forgettable coming-of-age story Labor Day and, now, Men, Women & Children, an ensemble film that purports to Say Something about the age of social media but keeps falling back on worn-out clichés. Worse, it lacks the biting wit that linked his first four films, though it does recycle some of their tropes (once again, J.K. Simmons is shocked to learn about his teenaged daughter’s pregnancy!). I’m a sucker for any film that begins with images of the Voyager space probe sailing past the outer planets, and I even liked the way the film cuts from that montage to a scene in which a man looks for porn on the internet (from one of humanity’s noblest uses of technology to one of its lowest!), but by the end I was pretty miffed at the film for recycling one of Carl Sagan’s best-known passages — the “pale blue dot” bit — without doing anything significant to earn that quote; where Sagan spoke in terms that encompassed the entire world and all its history, bringing together people separated by centuries and continents, this film is stuck in some relatively small community where everyone already knows everyone, and none of their interactions are terribly interesting. Plus, the film’s constant focus on the dangers of social media began to look dishonest and lopsided (and the Jennifer Garner character, in particular, is so obsessed with protecting her daughter from the dangers of the internet that you wonder why she even bothered to give her daughter a computer in the first place). The film is even more disappointing if, like me, you have tended to like Adam Sandler’s “serious” performances more often than not. What a waste.

October 9, 2014
Patti Smith talks to various Oscar bloggers about her Noah song 'Mercy Is' and why it no longer mentions horses
Next Post

October 13, 2014 Is there a part for Jesus in Bill & Ted 3?
Recent Comments
0 | Leave a Comment
"Animation would uniquely allow the creator to show the genitalia without getting into the waters ..."
Kellen The naked Christ in film: birth, ..."
"Gentlepersons:While I am a lifelong Christ-follower and served as Chaplain to a graduate program in ..."
Darrell A. Harris Exclusive: Patrick and Paul Aiello on ..."
"I know this is from 5 years ago, but I just got around to seeing ..."
digital bookworm Exclusive: Watch the trailer for Becoming ..."
"Thanks so much for making this list. I was thinking of doing something similar, but ..."
Bill Kudrle The Chosen — season one scripture ..."
Browse Our Archives
Related posts from FilmChat