Ewan McGregor plays Jesus and the Devil in Last Days in the Desert, premiering next month at Sundance 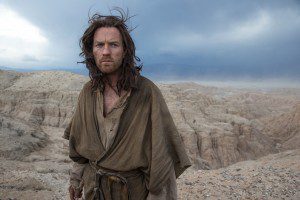 Back in February, there were reports that Ewan McGregor was going to play a holy man and a demon in a film called Last Days in the Desert, directed by Rodrigo Garcia (Albert Nobbs) with Emmanuel Lubezki (Tree of Life, Gravity, Birdman) handling the cinematography.

Today, the Sundance Film Festival announced that it will host the film’s premiere next month — and it also revealed that McGregor isn’t playing just any old holy man or demon:

Last Days in the Desert / U.S.A. (Director and screenwriter: Rodrigo Garcia) — Ewan McGregor is Jesus — and the Devil — in an imagined chapter from his 40 days of fasting and praying in the desert. On his way out of the wilderness, Jesus struggles with the Devil over the fate of a family in crisis, setting himself up for a dramatic test. Cast: Ewan McGregor, Ciarán Hinds, Ayelet Zurer, Tye Sheridan.

Will this be a first-century family in crisis? Or is Garcia going to mix the ancient and the modern the way, say, Luis Buñuel did at the end of Simon of the Desert?

Other films with a faith theme that sound interesting:

Going Clear: Scientology and the Prison of Belief / U.S.A. (Director: Alex Gibney) — Going Clear intimately profiles eight former members of the Church of Scientology, shining a light on how they attract true believers and the things they do in the name of religion.

Prophet’s Prey / U.S.A. (Director: Amy Berg) — When Warren Jeffs rose to prophet of the Fundamentalist Church of Jesus Christ of Latter Day Saints, he bridged the gap between sister wives and ecclesiastically justified rape, befuddling the moral compass of his entire congregation.

The festival will take place in Utah between January 22 and February 1.

December 7, 2014
Box office: Exodus: Gods and Kings opens behind Noah in Mexico and South Korea, beats it in Spain
Next Post

December 10, 2014 Moses at the Movies / When we trace more than a century of movies about the Exodus, what do we learn?
Recent Comments
0 | Leave a Comment
"Whoever wrote this article called Mary a virgin. She was only a virgin till after ..."
Ronnette Harvey The latest attempt to film all ..."
"In addition to this explanation of why "Paul says he can’t tell the Roman Christians ..."
PaulDT Paul, Apostle of Christ: a scene ..."
"Outstanding outline and identification of references and sources as well as background. Thank you so ..."
PaulDT Paul, Apostle of Christ: a scene ..."
"" So now, basically, the Magi are just a substitute for Santa Claus." <- Well... ..."
The 3 Wise Men — not ..."
Browse Our Archives
Follow Us!