Watch: Simeon and Anna in movies about the infant Jesus

Today, for many Christians, is the Feast of the Meeting (or Presentation) of Our Lord in the Temple. It commemorates the time when Joseph and Mary took Jesus to the Temple forty days after he was born, and there met Simeon and Anna, two old people who recognized the Christ child and made great predictions about his future.

Despite the significance of this story — today’s feast is one of the Twelve Great Feasts in the eastern churches — it has rarely been committed to film.

There are a few possible reasons for this:

For one thing, the story appears in Luke’s gospel only, so films that rely more strongly on the gospels of Matthew or John, for example, wouldn’t include it.

For another, most movies about the birth of Jesus have harmonized the accounts in Matthew and Luke by compressing time or conflating events in a way that doesn’t leave space for Simeon or Anna. In most films, the Magi arrive on the night of Jesus’ birth, and Herod’s men slaughter the children of Bethlehem not long afterwards, so it wouldn’t make dramatic sense for Joseph and Mary to go towards Jerusalem.

In any case, a few filmed versions of this story do exist.

Naturally, the story appears in the Genesis Project’s word-for-word adaptation of Luke, produced in the late 1970s. You can watch the relevant clip here:

A few things stand out about this clip.

First, it takes its time, stretching these nineteen verses out to over five minutes, to give us a feel for the cultural and religious context of the times. Along the way, it includes two brief shots of Mary bathing in a mikvah, which might make this the only movie set in the ancient world that even hints at Mary’s nudity. (Jean-Luc Godard’s Je vous salue, Marie had lots of nudity, but it moved the story to the present day.)

Second, the way Simeon points at the Christ child is quite dramatic; indeed it almost looks like he’s accusing the child of something. But in a way, that fits, given that Simeon is predicting that the child will cause a fair amount of turmoil: 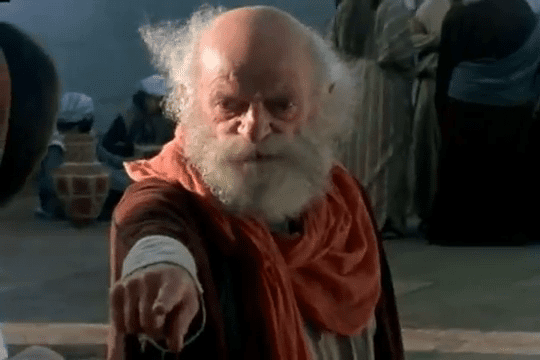 Third, this is the only filmed version of this story I can think of that includes Anna — and even this film omits the bulk of Anna’s back story from Luke 2:36: 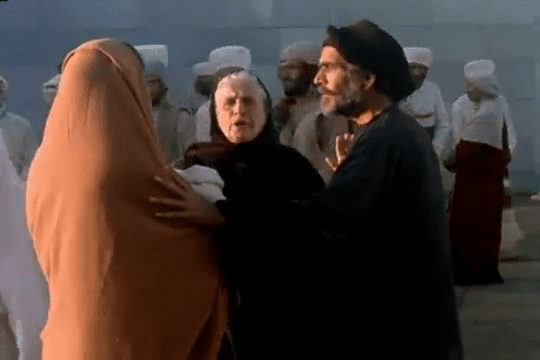 Why have no other films included Anna? I can think of a few reasons:

First, some filmmakers might find two old people making proclamations of this sort somewhat redundant — which would be ironic, given that Luke’s gospel itself eliminates redundancies that are found in the other gospels (e.g., Luke has only one feeding of the multitude rather than the two in Mark and Matthew).

Second, Luke’s gospel doesn’t give Anna any specific dialogue, so writers have less to work with there than they do with Simeon. Even the Genesis Project doesn’t bother to dramatize how Anna “spoke about the child to all who were looking forward to the redemption of Jerusalem.” It just shows her walking up to Joseph and Mary, saying a few words that we don’t hear, and then going her own separate way.

Third, many films follow the tradition that Mary’s own mother was named Anna, so adding another Anna to the mix might have been too confusing for the viewer.

In any case, footage from the Genesis Project’s adaptation of Luke was incorporated into the Campus Crusade Jesus movie released in 1979, but they re-shot the entire Nativity sequence with a different set of actors, and they omitted Anna altogether and reduced this segment to a mere 50 seconds. You can watch the relevant clip here:

It is striking how this scene — in a movie that was widely hyped at the time as the most accurate Bible movie ever — not only omits some of Simeon’s harsher dialogue but even gives him a line or two that he never says in the Bible.

Simeon took him in his arms and praised God, saying: “Sovereign Lord, as you have promised, you may now dismiss your servant in peace. For my eyes have seen your salvation, which you have prepared in the sight of all nations: a light for revelation to the Gentiles, and the glory of your people Israel.”

The child’s father and mother marveled at what was said about him. Then Simeon blessed them and said to Mary, his mother: “This child is destined to cause the falling and rising of many in Israel, and to be a sign that will be spoken against, so that the thoughts of many hearts will be revealed. And a sword will pierce your own soul too.”

And here is what Simeon says in the Jesus film:

Lord, now lettest thou thy servant depart in peace, according to thy word. Mine eyes have seen thy salvation. This child is chosen by God. May you both be blessed.

As with the Magnificat, so here: the Jesus film omits any explicit reference to Israel or politics and instead keeps a vague reference to the idea that Mary is blessed. It also has Simeon say that Jesus is “chosen” — which isn’t quite what the biblical Simeon says — but it keeps this vague, too, and avoids saying what he was chosen for.

The Jesus film also omits that poignant final line about a sword piercing Mary’s soul or heart, which has typically been interpreted as a prophetic foreshadowing of the sorrow that Mary felt at Christ’s crucifixion (though it is John’s gospel, not Luke’s, that places Mary at the crucifixion). This, too, feels like a missed opportunity.

For a much more dramatically rewarding interpretation of the Simeon story, we turn to Franco Zeffirelli’s Jesus of Nazareth, which first aired on NBC in 1977. In addition to casting the great British actor Ralph Richardson as Simeon, this miniseries extends the character’s presence within the story in two significant ways.

First, it links the meeting in the Temple to the circumcision of Jesus.

These two events actually happen over a month apart in Luke’s gospel, but by joining them, Zeffirelli solves the problem of how to introduce Simeon in a way that makes his arrival seem less random than it does in, say, the Genesis Project films. Instead of interrupting Joseph and Mary as they walk or sit nowhere in particular, Simeon now introduces himself while they are doing something of religious significance.

Zeffirelli also makes Simeon’s arrival less surprising to the viewer by introducing him before he meets Joseph and Mary. As Joseph and Mary make their way into the Temple, they stop so that Joseph can adjust his shawl, and the camera stops with them — thus allowing the viewer to notice the old man to the left of the frame: 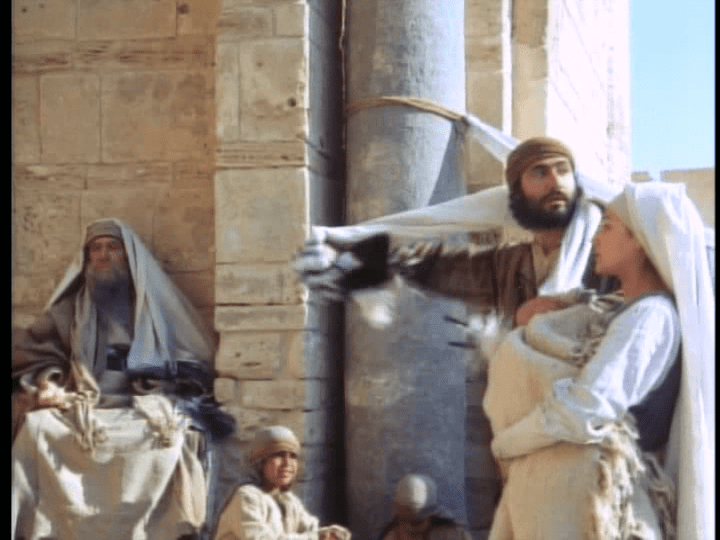 The camera then cuts to another angle as Joseph and Mary enter the building, and as they walk past the camera, we see Simeon again, and his eyes shift from right to left, almost as though he can sense that someone important has just gone past him: 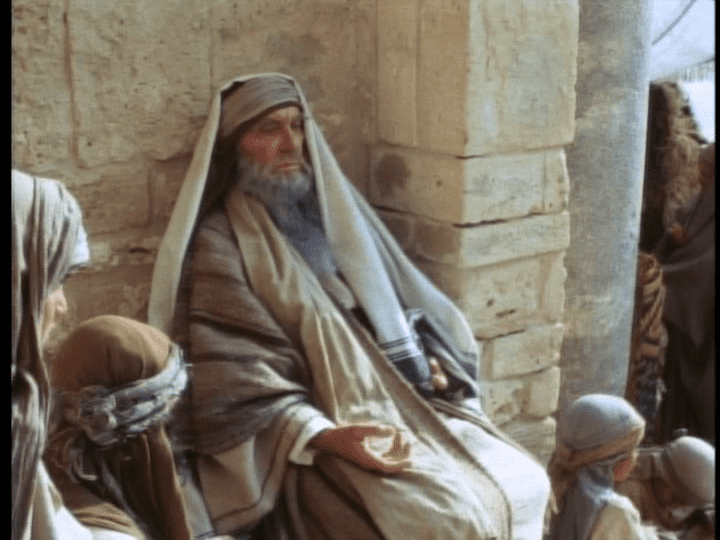 Then, when the infant Jesus is circumcised, Simeon is alerted by the baby’s cries… 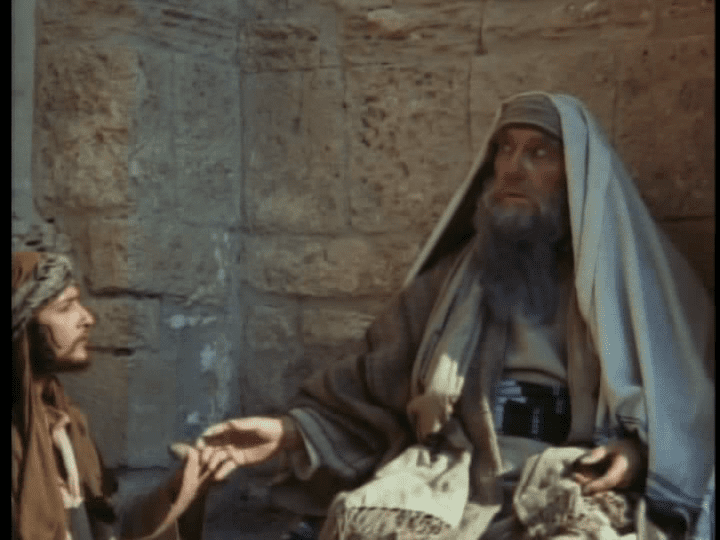 …and so he gets up, walks over and pays homage to the child: 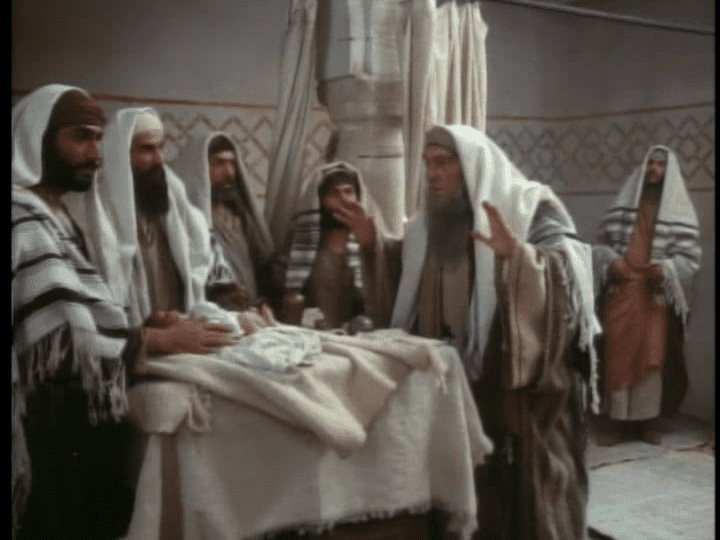 What’s more, the film defuses the strangeness of this seemingly random encounter by acknowledging that it would, in fact, have seemed a little strange: as Simeon pays homage to the child, the man who performed the circumcision shakes his head and gives Joseph a look that says, in effect, “Sorry about the strange old man here.” 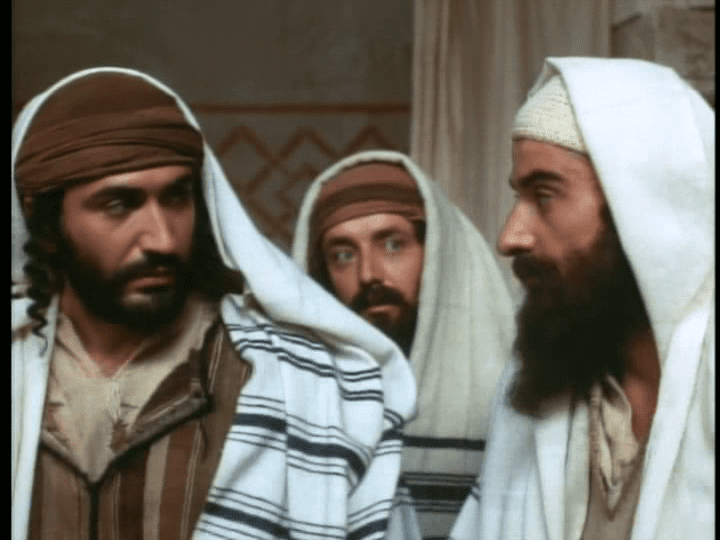 Simeon then introduces himself to Joseph before continuing to pay homage.

Joseph and Mary, of course, have already had encounters with angels and shepherds and strange dreams by this point, so they’re not too surprised that another man has recognized their child. But they are, perhaps, a little troubled by the sorrow in Simeon’s voice when he tells Mary that a sword will pierce her heart. 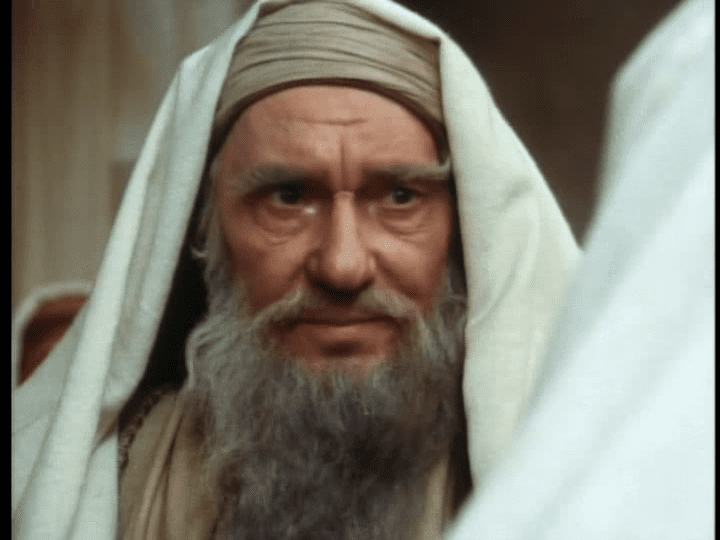 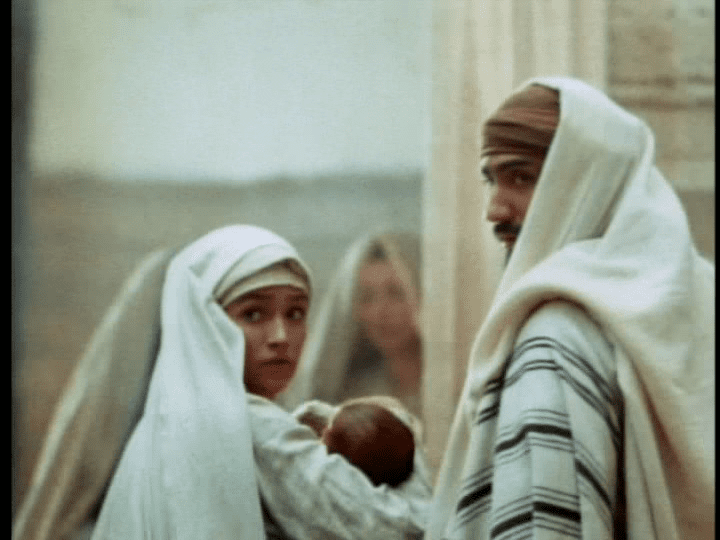 Here is Simeon’s dialogue in this scene:

(on entering the room) Where is he?

(while bowing before the child) Now I can die contented, Lord, according to thy word. (looks up at Joseph) I am Simeon, an old man who has waited long to see his salvation. (goes to pick the child up) And now my eyes have seen the child who will bring the salvation thou hast prepared before all people: a light of revelation to the Gentiles, and the glory of thy people Israel.

(after handing the child to Mary) And a sword shall pierce your heart.

The opening line — “Where is he?” — puts Simeon in the same camp as the shepherds and the wise men who are looking for the baby Jesus. The rest of his dialogue — except for one sentence of introduction taken from Luke’s narration — is a condensed version of what the biblical Simeon says, but it covers the basics: Simeon has seen the child he was waiting for, the child will bring salvation to Jews and Gentiles alike, and the means by which the child does this will be painful for those who love him.

Ordinarily, that would be it for Simeon. But Jesus of Nazareth brings him back several scenes later, after Herod’s men kill the children in Bethlehem. As the women weep in the streets, Simeon steps out of one building and quotes Matthew 2:17-28:

Thus is fulfilled that which was spoken by the prophet Jeremiah: “In Ramah, was there a voice heard: lamentation, weeping and great mourning, Rachel weeping for her children, and would not be comforted, because they were no more.”

And then Simeon, too, begins to weep. And so this scene harks back to the two elements that characterized his earlier scene: the prophetic sensibility, and the hint of sorrow in his voice when he told Mary that a sword would piece her heart. 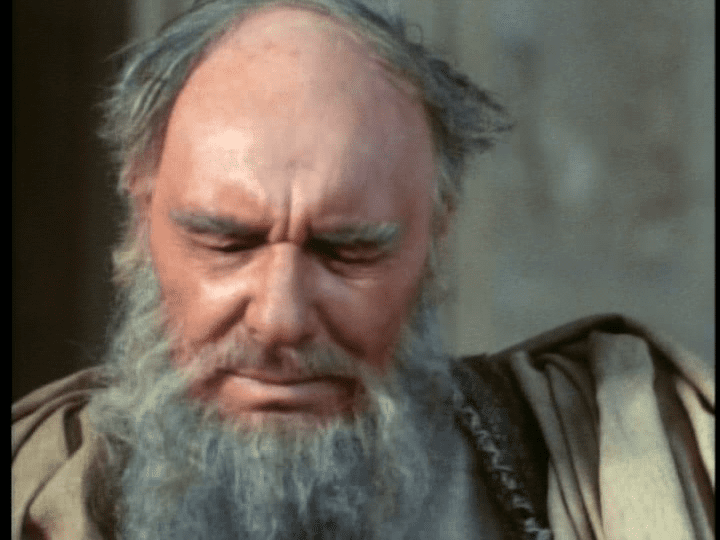 That’s pretty much it for major Jesus films that have depicted Simeon (and Anna).

The Genesis Project films were based on Luke’s gospel, and thus didn’t have to worry about harmonizing their accounts of the Nativity, while Zeffirelli’s miniseries is one of the few harmonized films that delays the arrival of the Magi (and the subsequent murder of the children in Bethlehem) to a point well after the birth of Jesus, thus allowing Joseph and Mary to visit Jerusalem without fearing for their lives.

If I have forgotten any other significant films, please let me know!

February 2, 2015
The Ben-Hur remake has started principal photography
Next Post