The Magnificat, and the politics thereof, in film

The Magnificat, and the politics thereof, in film December 25, 2014 Peter T. Chattaway 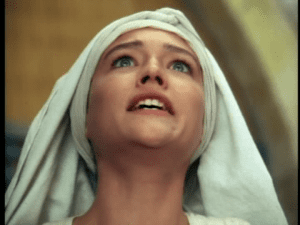 Christ is born! Glorify him!

Fred Clark posted a really interesting item this morning, noting that “the true meaning of Christmas” can be found in a poem spoken by Mary not long after she learned that she was pregnant with the Son of God — and he notes that the poem in question has a significant political edge, in which the powerful are brought down from their thrones while the humble are lifted up, and the rich are sent away hungry while the poor are filled.

This got me curious as to how many films have actually reflected the edgier aspects of this poem, which is known as the Magnificat. And the answer is: not many. In fact, there are very few films that incorporate the Magnificat at all, and those that do usually cut out the more politically-charged stuff. Usually, but not always.

I’ll get to the films in a moment, but first, for comparison’s sake, here is the Magnificat itself. It is spoken by Mary when she meets her cousin Elizabeth, who is pregnant with John the Baptist. Elizabeth declares that Mary is blessed, and that the baby in her womb (i.e. Elizabeth’s) leapt for joy at the sound of Mary’s voice, and Mary responds with this song, which takes up ten verses in the first chapter of Luke’s gospel:

46 And Mary said:
“My soul glorifies the Lord
47 and my spirit rejoices in God my Savior,
48 for he has been mindful
of the humble state of his servant.
From now on all generations will call me blessed,
49 for the Mighty One has done great things for me—
holy is his name.
50 His mercy extends to those who fear him,
from generation to generation.
51 He has performed mighty deeds with his arm;
he has scattered those who are proud in their inmost thoughts.
52 He has brought down rulers from their thrones
but has lifted up the humble.
53 He has filled the hungry with good things
but has sent the rich away empty.
54 He has helped his servant Israel,
remembering to be merciful
55 to Abraham and his descendants forever,
just as he promised our ancestors.”

Now, to the films themselves.

This isn’t an exhaustive list by any stretch, but after a quick skim of all the major Bible movies in my collection, I could find only four films that had the Magnificat.

Why so few? I can think of at least three reasons: a number of films begin when Jesus is an adult, and skip over the birth narratives entirely; those that do include the Nativity sometimes omit Mary’s visit to Elizabeth; and some are based exclusively on the gospels of Matthew or John and thus cannot include a passage from Luke.

When the Genesis Project’s adaptation of Luke was condensed into the two-hour Jesus film (1979), the Nativity section was re-shot altogether. And in that version, the Magnificat was cut down to this:

My soul doth magnify the Lord, and my spirit hath rejoiced in God my saviour. From now on, all generations will call me blessed.

So the version of the Magnificat that appears in the Jesus film was basically reduced to verses 46, 47 and the second half of 48 — thus skipping over the line about God being mindful of Mary’s humble state. All the topsy-turvy stuff from the later verses about God exalting the humble and scattering the proud was left out altogether.

You can watch this version of the Magnificat here, starting at the 1:30 mark:

Around the time those films were being made, Franco Zeffirelli directed Jesus of Nazareth (1977), a six-hour miniseries that devotes over an hour to the Nativity, including Mary’s visit to Elizabeth. And in that film, this is what Mary says:

My soul doth magnify the Lord, and my spirit hath rejoiced in God my saviour, for he has looked kindly upon the most humble of his handmaidens, and he has told me that all generations shall call me blessed. He who is mighty has done unto me a mighty thing.

This version keeps verses 46 to 49 — including the reference to Mary’s humble state — but it leaves out all the verses that follow. The Magnificat in this film is all about Mary, but it doesn’t say anything about the broader implications of the Incarnation.

You can watch this version of the Magnificat here, starting at the 18:05 mark:

The only film I can find that keeps the more political bits of the Magnificat — not counting the Genesis Project, which was obliged to keep those bits by virtue of being a complete word-for-word adaptation of the text — is, perhaps surprisingly, The Nativity Story (2006), which was criticized when it first came out for being too mild for a Bible film released only two years after The Passion of the Christ.

Significantly, this film omits the Magnificat from the scene in which Mary first meets Elizabeth, but it makes up for this by giving the Magnificat the last word, by placing it at the end of the movie and allowing it to sum up what the story was about. This is what Mary says in a voiceover as she and Joseph make their way to Egypt:

The Almighty has done great things, and holy is his name. He has shown strength with his arm. He has scattered the proud. He has filled the hungry with good things, and the rich, he has sent away empty. He has brought down rulers from their thrones, and has exalted those who were humble.

This version is based on verses 49 and 51-53. It skips over the verses about Mary — in verse 49, it even leaves out the bit where Mary says that God has done great things “for me” — and it also skips over verse 50, which talks about people “fearing” God, as well as verses 54 and 55, which talk about God’s relationship with Israel.

But it does go straight to the verses about God scattering the proud, sending the rich away empty, and bringing rulers down from their thrones.

Note, incidentally, how the voiceover flips verses 52 and 53, so that the last line in the film focuses on the downfall of the rulers rather than the rich being sent away empty. This ties in to the film’s recurring focus on Herod the Great and the many signs of tyranny under his reign, culminating in the massacre of the children in Bethlehem.

Putting the Magnificat at the end of the film also allows the filmmakers to develop a character arc for Mary. She has doubts at first — doubts about her betrothal to Joseph, doubts about her destiny as the mother of the Messiah — but those doubts are resolved by the end of the film. In addition to summing up the movie’s themes, the Magnificat reflects the confidence that Mary has found in her calling.

You can watch this version of the Magnificat here, starting at the 1:32:30 mark:

One film that could have included the Magnificat but doesn’t is Mary, Mother of Jesus (1999). In that film, Mary meets Elizabeth and the baby leaps in Elizabeth’s womb, but Elizabeth’s declaration of praise for Mary and her child is deferred to another scene, and neither of those scenes contains the Magnificat. Instead, Mary simply responds to Elizabeth’s praise by saying, “We mustn’t be afraid. We must trust in the Lord.”

So, there are four films (that I know of) that include the Magnificat in any way, shape or form. Only one of them includes the entire passage, but that’s because the film in question is a word-for-word adaptation of Luke. Of the two dramatic films — i.e., films which are not limited by the need to stick to the text — only one, Jesus of Nazareth, incorporates the Magnificat into the diegesis. But it is the other dramatic film, The Nativity Story, that includes the socio-political thrust of the passage.

If you can think of any other films that depict Mary reciting the Magnificat, please let me know in the comments. Cheers, and merry Christmas!

P.S.: Honourable mention goes to Jean-Luc Godard’s Je vous salue, Marie (1985), which sets the Nativity in modern Switzerland. I haven’t watched the film all the way through in years, but I do recall this nod to the Magnificat from near the end: 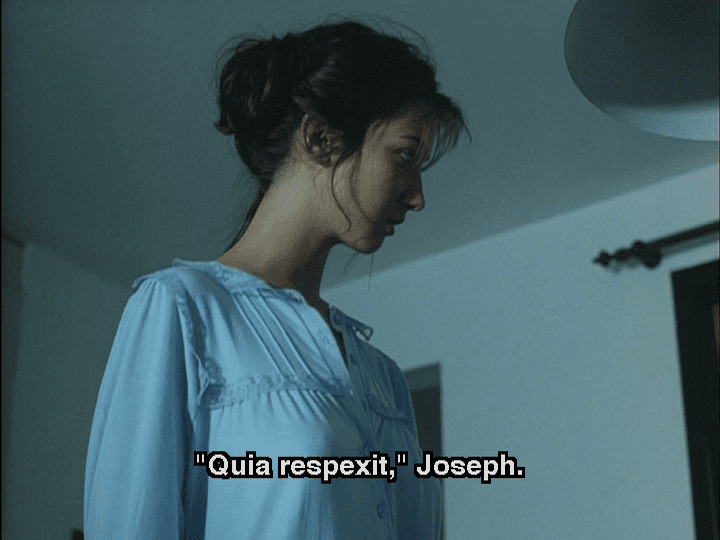 The film was very controversial at the time because it dwelled at some length on the nudity of Mary while she is pregnant with Jesus, and in this particular scene, Jesus is a young boy who looks under Mary’s nightgown and asks her to name the various parts of her body. Joseph objects that Jesus is too old to see Mary naked now, and Mary replies by saying, “Quia respexit, Joseph,” which comes from the Latin translation of “For he has regarded the humble state of his handmaiden.”

So in his typically provocative way, Godard takes this passage about God exalting the humble and applies it to the humble status of the flesh. Make of it what you will.

December 23, 2014
Exodus: Gods and Kings video round-up: several TV spots and an eleven-hour (!) video of the burning bush
Next Post

December 26, 2014Exodus: Gods and Kings banned in some Muslim countries
Recent Comments
0 | Leave a Comment
Browse Our Archives
get the latest from
FilmChat
Sign up for our newsletter
POPULAR AT PATHEOS Entertainment
1