The prophet Isaiah at the movies: a quick round-up

The prophet Isaiah at the movies: a quick round-up May 9, 2015 Peter T. Chattaway

Today is the feast day for the prophet Isaiah in the Orthodox Church, so I figured it might be good to round up a few films that have referenced and depicted him.

Alas, there aren’t really any films (that I know of) that dramatize the life of Isaiah himself. Isaiah lived circa 700 BC, about two centuries after the death of Solomon and one century before the destruction of Jerusalem at the hands of the Babylonians, and there are very, very few Bible films that take place between those two points.

The closest thing to a dramatization of Isaiah’s life that I know of is the ten-minute prologue to the first episode of the Living Christ series. The gospel of Matthew quotes Isaiah to the effect that the Messiah will be born of a virgin, and The Living Christ introduces this prophecy by dramatizing how the prophecy was given.

You can watch that episode here:

In fact, in its original context, Isaiah was not predicting the birth of a Messiah some hundreds of years in the future but the birth of a boy right then and there — possibly Isaiah’s own son — who would live to see those kingdoms destroyed before he had even grown up. It wasn’t until Matthew wrote his gospel hundreds of years later that anyone connected this prophecy to the virginal conception of the Messiah.

So by recontextualizing the prophecy, and setting it after Judah is saved from its enemies, the filmmakers are able to keep the messianic interpretation of the prophecy while avoiding the awkward fact that, in its original context, a prophecy about something happening hundreds of years in the future might not have been very reassuring to a king who was facing an imminent invasion.

The only other cinematic reference to Isaiah that I can think of right now that is set in Old Testament times is a line of dialogue in the fifth episode of The Bible, in which the prophet Daniel tells the Persian king Cyrus about a prophet named Isaiah who is living in Babylon at that time. This seems to be a nod to the theory, widely accepted by scholars, that the later portions of the book of Isaiah were composed long after the lifetime of the prophet who lived in Hezekiah’s day. See here for more details.

Most of the other cinematic references to Isaiah that I can think of take place within a New Testament context. There are stories in the gospels and Acts about Jesus, Paul, John the Baptist and others reading and quoting Isaiah, so of course those have been filmed. But filmmakers have added some Isaiah references of their own, too.

Just a few months ago, in Killing Jesus, he appeared for a few seconds in a nightmare of Herod the Great’s, which you can watch here (via USA Today):

(Fun fact: Isaiah is played in that scene by Vernon Dobtcheff, who also played the prophet Samuel in the prologue to Roberto Rossellini’s The Messiah.)

Martin Scorsese also had a cameo as Isaiah in The Last Temptation of Christ: 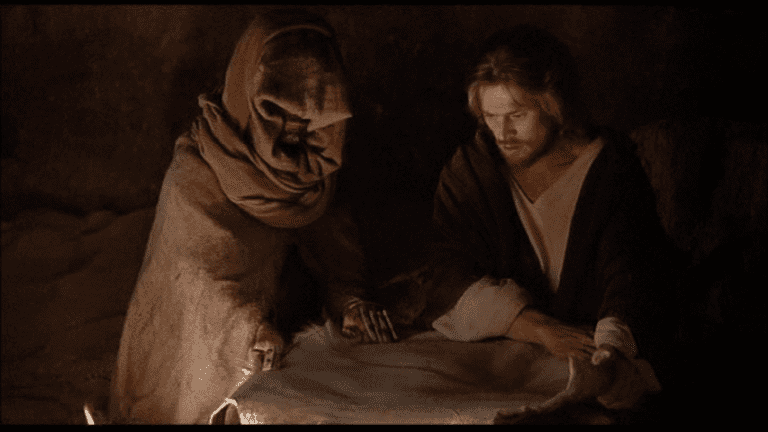 In that scene, Isaiah is showing Jesus the “suffering servant” passage from Isaiah 53 — and, as it happens, that passage has been cited in a number of other films, too.

Nicodemus quotes that passage in Franco Zeffirelli’s Jesus of Nazareth as he watches Jesus die on the cross.

The Passion of the Christ opens with a title card that quotes that passage.

And apparently tomorrow night’s episode of A.D. The Bible Continues will quote that passage, too, as Saul and Peter debate whether Jesus was the Messiah:

Finally, Pier Paolo Pasolini added a quote from Isaiah to The Gospel According to St. Matthew — a film that took almost all of its dialogue directly from Matthew — and figured he’d get away with it because Matthew quoted Isaiah so much anyway.

So. Those are the only cinematic nods to Isaiah I can think of. Are there any others?

May 9, 2015
Casting news: The Shack! Miracles from Heaven! Ben-Hur!
Next Post

May 10, 2015A.D. The Bible Continues -- season one, episode five
Recent Comments
0 | Leave a Comment
"What about Hellboy, The Grudge, Ghoulies, and Anaconda?"
45th Spiderbob Group VGCP When R-rated franchises go PG-13 …
"Not yet, but I might do something like that once Season 2 is complete."
Peter T Chattaway The Chosen — season one scripture ..."
"Is there a PDF or printable version of this extensive list? I would love to ..."
Liza The Chosen — season one scripture ..."
"What a strange article. Using movies as your basis to defend that Lazarus was murdered ..."
Mark Ross DeFazio The death, resurrection, and second death ..."
Browse Our Archives
get the latest from
FilmChat
Sign up for our newsletter
POPULAR AT PATHEOS Entertainment
1