Apostle Peter and the Last Supper is one of a handful of low-budget Bible films produced by Pure Flix Entertainment, the company behind Woodlawn and God’s Not Dead. Until last month, I had not seen any of that company’s biblical adaptations, but the news of Robert Loggia’s death prompted me to check out this film, which stars Loggia as the titular disciple on the eve of his martyrdom in Rome.

Loggia, an old professional who had been working in Hollywood since the 1950s, is easily the best thing about this film. His performance feels utterly natural, certainly in contrast to that of the actors playing the soldiers who keep watch over his character in prison — and in a way, the talent gap between Loggia and his co-stars helps the drama, since there’s a parallel between the age and experience that Loggia brings to this film and the way Peter gracefully accepts the flaws of his captors and tells them what things were really like back when Jesus walked the earth.

As the title suggests, the primary focus of this film is the Last Supper. The film is about 90 minutes long, and the middle half-hour is devoted to Peter’s memory of the final dinner that he and the other disciples shared with Jesus before his arrest and crucifixion. And the centrepiece of that sequence, and indeed the entire film, is a remarkable (and, I am tempted to think, unprecedented) sequence lasting ten or eleven minutes in which several of the disciples react to Jesus’ statement that one of them will betray him.

According to the gospels, after Jesus declared that one of his disciples was a traitor, each of them asked him one by one, “Is it I, Lord?” But the film, rather than portray these reactions as a series of objective events, dramatizes them in a radically subjective way.

One by one, we enter each disciple’s mind as he imagines himself facing Jesus alone at the table, and each disciple rattles off a list of reasons why he would never betray Jesus — but then, confidence gives way to self-doubt as each disciple realizes how his individual personality traits, including both strengths and flaws, could cause him to betray his Lord. 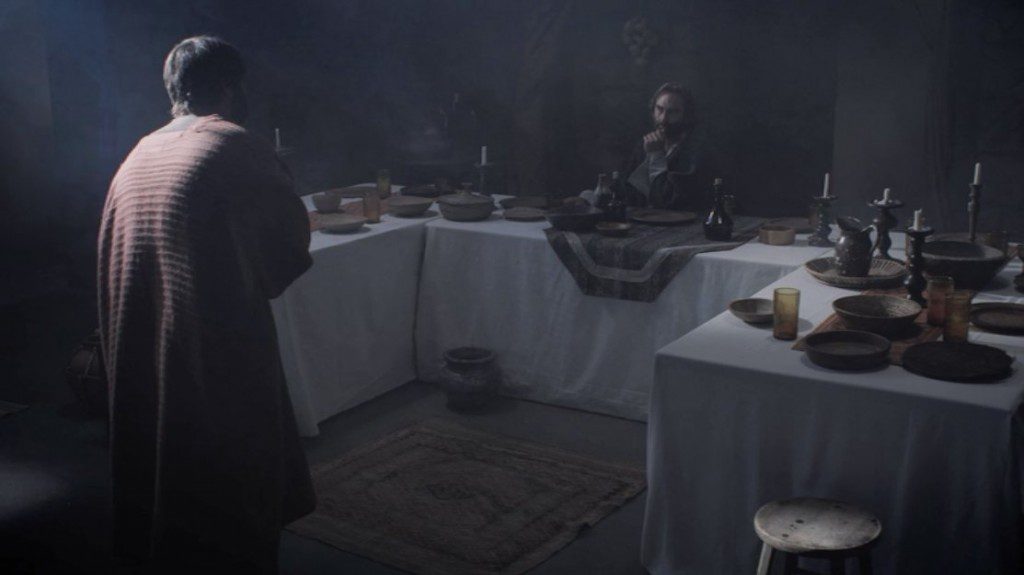 The dreamlike quality of this sequence is enhanced by the pale lighting and by the silence of Jesus as each disciple addresses him (are we simply seeing their own conceptualizations of Jesus, or is Jesus actually present within their thoughts and hearing them?). There is even an intriguing visual effect: when it is Peter’s turn to wonder if he might be the traitor, Jesus holds a bottle of wine above a cup, and the wine flows backwards from the cup back into the bottle. The film never spells out what this means, but I love that, because it teases our own imaginations into thoughtful engagement with the story.

Of course, in some ways, this series of interior monologues doesn’t really make any sense, because the entire Last Supper is narrated from the older Peter’s point of view, and how could he possibly know the thoughts of his fellow disciples in such detail? (Note how Judas quickly bolts from the supper, betrays Jesus in Gethsemane, and is dead within hours. It’s not like Peter could have spoken to him afterwards and found out what he was thinking.)

But I can accept the dramatic conceit that makes these monologues possible, simply because I find them such an interesting way to approach this part of the story.

Other dramatic elements are more shopworn, not the least of which is the fact that one of the Roman guards, whose name is Martinian, has a wife who is deeply interested in Christianity, and who basically tells her husband he’ll be sleeping on the couch if he doesn’t ask Peter some questions for her. (See Quo Vadis?, The Sign of the Cross, The Apocalypse and other films that revolve around a doubting Roman soldier and a female love interest who either believes in Jesus or is inclined to be a believer.)

While Peter is telling Martinian the story of his relationship with Jesus, the film shows another soldier named Processus sitting outside the cell and eavesdropping. This, I imagine, was meant to introduce some tension into the story: will Processus snitch on Martinian if Martinian goes too far and becomes a convert to Christianity himself? I wondered, at one point, if maybe the film would surprise us by having Martinian reject Peter’s faith while Processus accepts it; that might have been kind of clever.

But no, in the end (spoiler alert!) they are both converted, and I wonder if this reflects the difficulty evangelical filmmakers often seem to have, imagining how someone could genuinely hear the gospel and still say no to it. The only characters who reject it in films like these seem to be over-the-top jerks who never properly gave it the time of day to begin with.

The film also introduces a demonic figure who may be Satan himself. The first time we see him, he is taunting the older Peter in his prison cell, and he returns to promise Peter freedom if Peter will deny Jesus again the way he did so many years ago.

The demonic figure even appears in one of the flashbacks to the Last Supper, pouring wine into Judas’s cup. It’s striking, and a bit unsettling, to see anyone other than Jesus and his disciples at the Last Supper — but especially to see this person there. Then again, Judas is presumably the only one who can see this figure, and the fact that Judas can see him is presumably meant to dramatize the passages in the gospels which tell us that Satan entered Judas when Judas betrayed Jesus.

The film does not show the crucifixion itself, possibly because Peter never witnessed it; he had gone into hiding after denying Jesus outside the building where the trial took place. But it also never shows the resurrection, which the biblical Peter witnessed multiple times. And there is no reference at all, that I can recall, to the events of the book of Acts — not even the times when Peter stayed in other prisons and was set free by angels.1

This film is also noteworthy for marking the return of Bruce Marchiano as Jesus. Marchiano previously played Jesus in the Visual Bible’s adaptations of Matthew and Acts in the early to mid 1990s. He was in his late 30s when he starred in those films, and he was 56 when this film came out, which makes him one of the few actors to play Jesus in multiple films and one of the oldest actors to tackle the role.2 (Now 59, he has played Jesus in a few other recent and upcoming films, too.)

The flashbacks to Jesus’ ministry are somewhat rushed and out of sequence; practically the first time Peter (and his brother Andrew) meet Jesus, Jesus is asking who people say that he is, and Peter is replying that Jesus is the Christ, the Son of the living God — which is an exchange that takes place in the gospels only after Jesus and the apostles have spent a lot of time together. (Notably, the film leaves out Jesus’ reply to Peter, which Catholics have traditionally cited as the basis for the papacy.) And then Jesus goes to Peter’s home to heal his mother-in-law, which is something that happens at the very beginning of Jesus’ ministry in the gospels.

But whatever weaknesses the film may have, it does, at least, have that strikingly original treatment of the “Is it I?” passages. And it is grounded by that fine performance of Robert Loggia’s. All low-budget Bible films should be so lucky as to have an actor of his calibre in their casts.

1. As with The Passion of the Christ (especially its Gethsemane sequence), so here: angels are written out of the story and replaced with demons.

2. One of the oldest actors to play Jesus prior to this was H.B. Warner, who starred in Cecil B. DeMille’s The King of Kings (1927) when he was 51. As for actors appearing in multiple Jesus films: Howard Gaye played Jesus in Intolerance (1916) and Restitution a.k.a. The Conquering Christ (1918); and Robert Wilson played Jesus in The Living Christ (1951), I Beheld His Glory (1953) and Day of Triumph (1954). I do not know when Wilson was born, but he seems to have been at the older end of the spectrum too.