Noah and Exodus: Gods and Kings — the scholars speak!

My friend Matt Page has alerted me to the fact that two collections of essays, on Noah and Exodus: Gods and Kings, are scheduled to come out in the next year or so.

Noah as Antihero: Darren Aronofsky’s Cinematic Deluge will come out sometime in 2017. It will be published by Routledge, and it is being edited by Rhonda Burnette-Bletsch (with whom I have worked on a few projects) and Jon Morgan.

Here is the official description of that book:

This collection of essays by biblical scholars is the first book-length treatment of the 2014 film Noah, directed by Darren Aronofsky. The film has proved to be of great interest to scholars working on the interface between the Bible and popular culture, not only because it was heralded as the first of a new generation of biblical blockbusters, but also because of its bold, provocative, and yet unusually nuanced approach to the interpretation and use of the Noah tradition, in both its biblical and extra-biblical forms. The book’s chapters, written by both well-established and up-and-coming scholars, engage with and analyze a broad range of issues raised by the film, including: its employment and interpretation of the ancient Noah traditions; its engagement with contemporary environmental themes and representation of non-human animals; its place within the history of cinematic depictions of the flood, status as an ‘epic’, and associated relationship to spectacle; the theological implications of its representation of a hidden and silent Creator and responses to perceived revelation; the controversies surrounding its reception among religious audiences, especially in the Muslim world; and the nature and implications of its convoluted racial and gender politics. Noah as Antihero will be of considerable interest to scholars conducting research in the areas of religion and film, contemporary hermeneutics, reception history, religion and popular culture, feminist criticism, and ecological ethics.

And here are the contents:

Incidentally, I rounded up some Muslim responses to Noah in this blog post.

Meanwhile, Biblical Reception 4: Essays on Exodus: Gods and Kings will come out in December. It is being published by Bloomsbury and edited by David Tollerton.

Here are the contents: 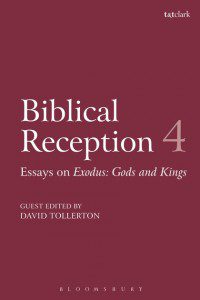 If any other books like these are in the works, then by all means, please let me know!

June 12, 2016
Box office: North Americans go for the ghosts, while foreign audiences go for a tale of humans battling orcs
Next Post

June 13, 2016 Watch: A new featurette about the chariot race in Ben-Hur
Recent Comments
0 | Leave a Comment
"I don't always agree with your opinions, but your reviews are never less than interesting ..."
Laura-Lee Rahn The top-grossing Italian movie of 2019: ..."
"Whoever wrote this article called Mary a virgin. She was only a virgin till after ..."
Ronnette Harvey The latest attempt to film all ..."
"In addition to this explanation of why "Paul says he can’t tell the Roman Christians ..."
PaulDT Paul, Apostle of Christ: a scene ..."
"Outstanding outline and identification of references and sources as well as background. Thank you so ..."
PaulDT Paul, Apostle of Christ: a scene ..."
Browse Our Archives
Follow Us!