Why is Jesus crying in this image from the new Ben-Hur?

Damaris Media in the UK has posted a set of community resources in connection with the upcoming release of Ben-Hur, including a church discussion guide and a youth activity pack, and along the way they have also provided some new photos from the upcoming film — including an image of Jesus shedding tears while he prays.

What is happening in this scene? Two possibilities come to mind — neither of which have been depicted in any previous movie version of Ben-Hur to my knowledge.

My first thought was that this might be Jesus praying in Gethsemane shortly before he is betrayed. If that is what this scene is, then its inclusion in this film could be rather interesting, as Lew Wallace’s original novel imagined that Judah Ben-Hur was the young man in Mark’s gospel who ran naked through Gethsemane after the arrest of Jesus. I wouldn’t expect the new film to show all that, but you never know.

Here is how Mark 14:51-52 describes that part of the Gethsemane story:

51 A young man, wearing nothing but a linen garment, was following Jesus. When they seized him, 52 he fled naked, leaving his garment behind.

And here is how Wallace’s novel describes that part of the story:

Taking off his long outer garment and the handkerchief from his head, [Judah Ben-Hur] threw them upon the orchard wall, and started after the posse, which he boldly joined. Through the stragglers he made way, and by littles at length reached the man who carried the ends of the rope with which the prisoner was bound.

The Nazarene was walking slowly, his head down, his hands bound behind him; the hair fell thickly over his face, and he stooped more than usual; apparently he was oblivious to all going on around him. In advance a few steps were priests and elders talking and occasionally looking back. When, at length, they were all near the bridge in the gorge, Ben-Hur took the rope from the servant who had it, and stepped past him.

“Master, master!” he said, hurriedly, speaking close to the Nazarene’s ear. “Dost thou hear, master? A word–one word. Tell me–”

The fellow from whom he had taken the rope now claimed it.

“Tell me,” Ben-Hur continued, “goest thou with these of thine own accord?”

The people were come up now, and in his own ears asking angrily, “Who art thou, man?”

“O master,” Ben-Hur made haste to say, his voice sharp with anxiety, “I am thy friend and lover. Tell me, I pray thee, if I bring rescue, wilt thou accept it?”

The Nazarene never so much as looked up or allowed the slightest sign of recognition; yet the something which when we are suffering is always telling it to such as look at us, though they be strangers, failed not now. “Let him alone,” it seemed to say; “he has been abandoned by his friends; the world has denied him; in bitterness of spirit, he has taken farewell of men; he is going he knows not where, and he cares not. Let him alone.”

And to that Ben-Hur was now driven. A dozen hands were upon him, and from all sides there was shouting, “He is one of them. Bring him along; club him–kill him!”

With a gust of passion which gave him many times his ordinary force, Ben-Hur raised himself, turned once about with arms outstretched, shook the hands off, and rushed through the circle which was fast hemming him in. The hands snatching at him as he passed tore his garments from his back, so he ran off the road naked; and the gorge, in keeping of the friendly darkness, darker there than elsewhere, received him safe.

The only problem with the Gethsemane theory is that the arrest of Jesus happened at night, and this photo seems to have been taken during the day. It’s possible that the filmmakers shot the scene using a day-for-night technique, of course, but still.

The other possibility that occurs to me is that this might be the scene in which Jesus raises Lazarus from the dead. Jesus famously wept before raising Lazarus according to John 11:35 — the shortest verse in the whole Bible! — and there is a brief reference to the raising of Lazarus in Wallace’s novel, so perhaps that’s what’s going on here.

But the main problem with that theory is that there is nothing in the complete image (which you can see below) to suggest that Jesus is anywhere near a tomb, or that he is anywhere near any of the onlookers who saw him raise Lazarus from the dead.

As ever, we’ll just have to wait until the film comes out to see exactly what is going on in this scene. But one thing is for sure: since most previous film versions of Ben-Hur avoided showing the face of Jesus altogether (and the one that didn’t, i.e. the 2010 miniseries, never showed Jesus isolated from the other characters like this), the new film is going to show us something new. New for Ben-Hur films, that is. 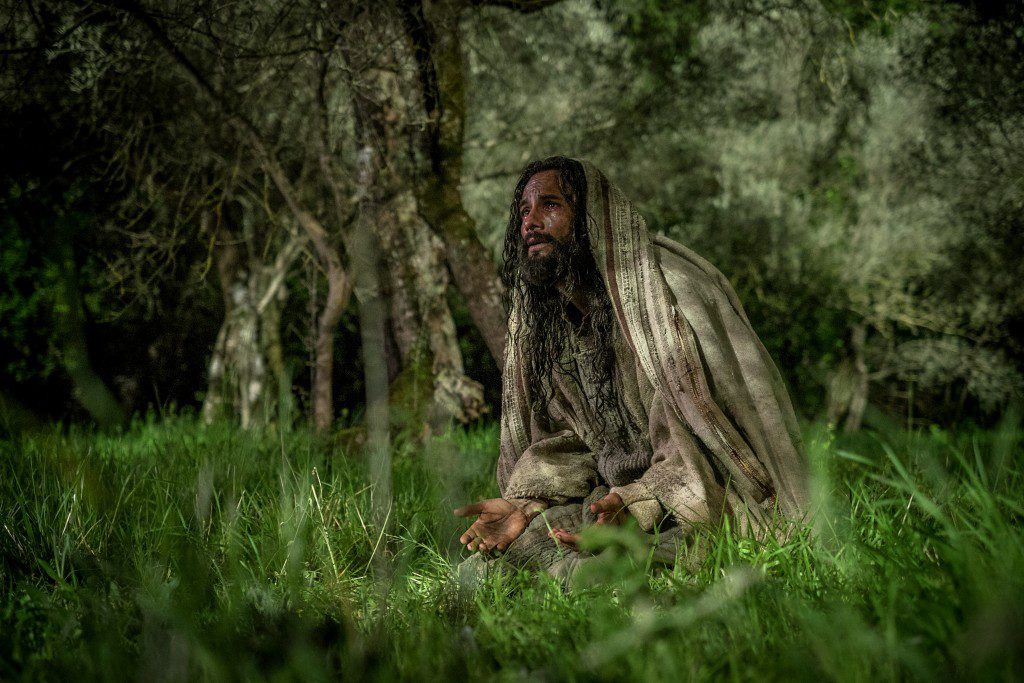