Exclusive: Watch the trailer for Becoming Truly Human, a documentary about the religiously unaffiliated

It used to be common for people to identify with a religious tradition, even if they weren’t very observant about it. But that is less and less the case these days, as studies have shown that an increasingly large percentage of the North American public has either given up on religion or never had it to begin with. Now filmmaker Nathan Jacobs has made a documentary that tells the stories of several “Nones” (so called because they tend to identify as “none of the above” on religious surveys), while articulating his own pilgrimage through None-ness to something else.

The film will start showing in churches and other “alternative venues” on August 22, and we have a trailer for it, which you can watch right here:

And here’s the press release for the film:

BECOMING TRULY HUMAN is a documentary that looks at the rise of the “Nones” (those who check “none of the above” on religion surveys). Multiple research groups report that this group has risen from roughly 6% of the U.S. population in the 1990s to 25% as of 2015. To date, little research exists on this growing demographic.

The film offers a cinematic portrait of eight “Nones,” each of whom shares his or her journey from religious affiliation to religious non-affiliation. The film hears from each individually and as a group, as they share their respective views about religion, the world, God, the afterlife, and much more. Woven throughout, one None, Basil, shares how his quest for spiritual wholeness ultimately led him from religious non-affiliation to something else entirely.

“Our research has found that because ‘Nones’ are outside of religious circles, they rarely voice their thoughts on religion or even have the opportunity to do so,” said Nathan Jacobs, writer and director of BECOMING TRULY HUMAN. “It’s a powerful experience for these ‘Nones’ to hear what others are thinking and know they are not alone.”

The film will be released in churches and alternative venues through TheatriCast, the demand-driven distribution initiative from Aspiration Studios. Freestyle Digital Media will handle the digital release of the film, which is timed to later in 2017.

About Aspiration Studios:
Aspiration Studios are producers of marketing and distribution for smart, spiritually-provocative, and socially-conscious content that resonates with aspirational audiences. Aspiration Studios is based in Nashville — one of the fastest growing creative & media centers in the US – which reflects the emerging cultural, spiritual, and lifestyle trends of audiences across the country and around the globe. TheatriCast is Aspiration’s alternative distribution unit, creating nationwide experiences in theaters and other venues that eventize content, socialize causes, and mobilize audiences. For more info, visit: www.theatricast.com.

About 5 SEES:
5 SEES is a non-profit production company with an Eastern Orthodox worldview. It exists to engage culture through cinema for all audiences. Established in 2016, 5 SEES is on track to produce regular content that spotlights the voice of America’s religiously unaffiliated, as well as enhance audience understanding of Eastern Orthodoxy by its engagement with a variety of cultural topics. To learn more about 5 SEES, visit www.5sees.com.

About the Director:
Nathan Jacobs appears as Basil in Becoming Truly Human, sharing his own journey as a None in search of spiritual wholeness. Jacobs is the writer-director of Becoming Truly Human. He is also the writer-director of the college comedy Killing Poe (2017) starring Matt Bush (The Goldbergs), Osric Chau (Supernatural, recurring), Julianna Guill (The Girlfriends Guide to Divorce, recurring), Sunkrish Bala (Castle, recurring), and Cyrina Fiallo (Good Luck Charlie, recurring). Jacobs holds a Ph.D. in religion and advanced degrees in philosophy and art. 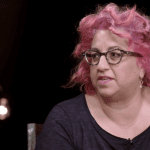 June 12, 2017
Newsbites: A "teen Jesus" series is being developed by the creator of Orange Is the New Black, and more!
Next Post

July 26, 2017 Watch: The first trailer for Sony Animation's The Star
Recent Comments
0 | Leave a Comment
"It's not simply a question of translation: Different Greek manuscripts use different Greek words. Most ..."
Peter T Chattaway The Chosen — season one, episode ..."
"The anger translations seem to really be an outlier. The vast majority of translations, old ..."
James Kabala The Chosen — season one, episode ..."
"Hi Kellen, thanks for the comment. That's a good point about animation. I am reminded ..."
Peter T Chattaway The naked Christ in film: birth, ..."
"Animation would uniquely allow the creator to show the genitalia without getting into the waters ..."
Kellen The naked Christ in film: birth, ..."
Browse Our Archives
Related posts from FilmChat