Oh dear. I think I’m in love. A Patch of Blue (1965) is easily one of the best films I have seen as part of this marathon, and it’s certainly the most emotionally engaging of the bunch (so far). I was shedding real tears by the end of this one.

The story concerns an 18-year-old girl named Selina who was accidentally blinded by her mother, a prostitute, at the age of five, and who has been not-so-accidentally abused by her mother ever since. One day Selina’s frequently-drunk grandfather takes her outside to a park and leaves her there, and Sidney Poitier walks by and befriends her… and, as the two of them get to know each other (over the course of multiple meetings), he decides to help her become more independent, and she, in turn, falls in love, not knowing that he is black — which could be a problem, given her mother’s racism.

There are so, so many ways this story could have gone wrong, but the movie steers clear of all those pitfalls. It could have lapsed into cheap sentiment, but it’s wiser than that — and so, too, are its characters, who certainly feel the lure of sentiment but are ultimately self-aware enough to rise above it.

Selina, for example, is naive and uneducated about many things, because she has never known life outside of her mother’s apartment — but she has also experienced terrible things that catch Poitier by surprise when she mentions them. She also has real human agency, which expresses itself in small ways at first — like when she tells Poitier not to buy a tomato because it’s too soft — but those moments hint at her potential to be even more assertive. (I love the tomato bit because Poitier is in the middle of trying to “teach” Selina about grocery shopping and other Outside World things, and her reply shows that she already knows some things, and indeed that he might be able to learn a thing or two from her. She’s not just a blank slate that he can project things onto.)

As for Poitier’s character, it would be so easy for his chivalry to morph into something more toxic and self-gratifying, but he catches himself in time — he is aware that he cannot allow his laudible concern for Selina to bleed into a romantic fling, and he knows that any sort of sexual relationship between them at this stage would basically be a form of exploitation. Selina needs a chance to heal, to experience more of life, to become a truly whole person before he can even consider getting involved with her. And if he doesn’t get involved with her down the road, because she has grown in a different direction from him, then he is smart enough to know that that’s okay, too.

I also really appreciate the way the film gives Poitier a brother (played by Ivan Dixon, who co-starred with Poitier in 1959’s Porgy and Bess and 1961’s A Raisin in the Sun). Just the fact that the brother exists makes Poitier a more-defined character in his own right, rather than someone who exists only for Selina’s sake; if Selina is more than a blank slate, then Poitier is more than a blank slate, too. The brother also challenges some of Poitier’s actions in a way that underscores the fact that Poitier’s character is making active choices and not just slipping into some sort of predefined role in Selina’s life. (The brother, incidentally, is an intern at a hospital; this is 15 years after Poitier played a doctor in his first film, 1950’s No Way Out.)

Poitier also gives one of his best, most natural, performances to date here. The joy he takes in getting to know Selina is infectious, but you can also sense his repressed irritation when he catches people in the park looking at them — a black man and a white woman walking together — a little funny.

Those hints of racism in the park give a real suspense to the scene in which Poitier and Selina’s mother finally confront each other, in public, over Selina’s future. And the final scene between Poitier’s character and Selina is so beautifully written, and beautifully performed, I’m getting a little choked up just thinking about it (and I watched the movie yesterday).

A few other quick points about this film:

— Selina is played by Elizabeth Hartman, who had never been in a movie before. She was nominated for an Oscar for this film and, at the time, she was the youngest best actress nominee ever. (She was 22. Her record was beaten by 20-year-old Isabelle Adjani in 1976, then by 13-year-old Keisha Castle-Hughes in 2004, and then by 9-year-old Quvenzhané Wallis in 2013.) Hartman’s last movie was 1982’s The Secret of NIMH, in which she provided the voice of Mrs Brisby.

— Selina’s mother is played by Shelley Winters, who won her second Oscar, for best supporting actress, for this role. (She won her first for 1959’s The Diary of Anne Frank.) Winters and Poitier both had cameos in 1965’s The Greatest Story Ever Told, but they did not share any scenes in that film.

— I believe this movie has Poitier’s first onscreen interracial kiss. Guess Who’s Coming to Dinner was still two years away.

— Once again, a Poitier character is called upon to sing (and whistle). I assume the fact that Poitier is tone-deaf in real life means he was dubbed again in those scenes.

— The piano-based score, by Jerry Goldsmith, is a huge part of why this movie worked for me. It reminded me at times of Michael Giacchino’s score for Pixar’s Inside Out.

In this case, Poitier is the protagonist, who works at a crisis call centre, and Anne Bancroft is a suicidal woman who calls the hotline after swallowing a bunch of pills — and as Bancroft tells her story, we get flashbacks to the crisis in her marriage that brought her to this point. (Some of the scenes between Bancroft and her husband are handled really well. You find yourself really hoping that things go in a positive direction even though you know that, because she ends up attempting suicide, they won’t.)

One curious thing about this movie is the way Bancroft’s voice plays on the soundtrack like she’s narrating the movie even when what we’re supposed to be hearing is the sound of her voice coming through the speakers in the call-centre office. The sound mix is more non-diegetic than diegetic, if I can put it that way; it lacks the distortion that we would expect to hear from a voice coming over the phone line.

But the fact that Bancroft’s voice sounds so detached from the movie does give a little extra oomph, for lack of a better word, to her ruminations about death etc. (At one point she comments on the fact that some of the people we hear on TV laugh tracks are probably dead by now, but they go right on laughing — a point Orson Welles made in a 1979 appearance on the Dinah Shore talk show that has circulated on social media in recent years.)

— Bancroft happened to be the presenter who gave Poitier his best actor award at the Oscars in 1964. She had won best actress the year before for The Miracle Worker.

— The guy who runs the call centre is played by Telly Savalas, who had an actual role (as Pontius Pilate) and not just a cameo in 1965’s The Greatest Story Ever Told.

— This was the fourth movie to be scored by Quincy Jones. It also features a scene at a discotheque called The Go-Go House, which might make this the first Poitier film to feature some form of rock’n’roll since 1955’s Blackboard Jungle (the intervening films have had plenty of jazz, but not rock, I think). Or did we hear some rock’n’roll in A Patch of Blue?

— The IMDb says The Slender Thread and A Patch of Blue opened within a week of each other in December 1965. I’m not sure if any other Poitier films opened that close together.

— The film is set in Seattle and begins with aerial shots of the city. (The Space Needle had been built only three years earlier, in 1962.) Later, we learn that Bancroft’s husband has sailed past Victoria on a fishing trip to Hecate Strait. (This is not the last Poitier film that will straddle the Washington/BC border!)

Finally, Poitier co-starred in Duel at Diablo (1966), his first Western.

The film, which concerns a cavalry unit attacked by Apaches, is mainly about James Garner’s character, a scout who wants revenge against the white man who killed his Comanche wife, as well as Bibi Andersson’s character, whose husband has rejected her ever since she was abducted by the Apaches. Poitier, who gets second billing, plays a former cavalryman who sold some horses to the army and is obliged to travel with the unit because the horses aren’t fully broken in yet.

It’s an okay film but nothing to write home about. A few quick points:

— The beginning and end of the film both feature a cavalry sabre that cuts an X through the screen, to reveal the dramatic action behind the titles and vice versa.

— Andersson appeared in this film the same year she appeared in Ingmar Bergman’s Persona (!).

— This was the second of three films that Poitier worked on with director Ralph Nelson, who previously directed Poitier in his Oscar-winning role in 1963’s Lilies of the Field.

— The Apache chief is played by John Hoyt, who previously played the high-school principal who chews Glenn Ford out over his supposedly racist comments in 1955’s Blackboard Jungle.

— The film gives Garner at least two brief lines of dialogue to the effect that the Apaches have a reason to be antagonistic towards the white Americans. But the first of these lines is quickly rebutted by an officer who says the Apaches go too far by killing women and children.

The image above shows Sidney Poitier and Elizabeth Hartman in A Patch of Blue. 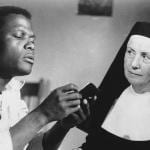 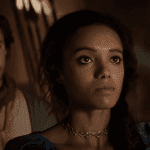 February 9, 2021Of Kings and Prophets -- episode two
Recent Comments
0 | Leave a Comment
"What a strange article. Using movies as your basis to defend that Lazarus was murdered ..."
Mark Ross DeFazio The death, resurrection, and second death ..."
"Another with Ethiopian eunuch and Philip https://archive.org/details..."
Jason McKahan Watch: Philip is the original vanishing ..."
"I found Hanky Panky a pretty cool 80s movie when I first saw it on ..."
UniblabBR Sidney Poitier marathon: Hanky Panky (1982) ..."
"In 1972, yes. The movie was made in 1956 but the ratings system didn't exist ..."
Peter T Chattaway One of the reasons I do ..."
Browse Our Archives
get the latest from
FilmChat
Sign up for our newsletter
POPULAR AT PATHEOS Entertainment
1