Stormy Justice (and Justice for Stormy)

If you stare into a mirror and chant “Stormy Daniels” five times, a friend of a friend will DM you and give you her phone number.

Or at least, that’s what happened to me. Except for the chanting/mirror part. But otherwise, yeah, someone sent me Stormy Daniels‘ number and was like, “She’s expecting your call,” so I dialed her up, and she pitched a story to me.

Picture this: A well-known author takes her shifty ex-lawyer to court over money he allegedly stole from her. However, in lieu of an actual defense, the lawyer asserts that the author shouldn’t be allowed to testify against him, because she practices witchcraft, and is therefore not of sound mind.

Okay, yes, it’s weak. I mean, it might have made a good Halloween episode of Matlock or Murder, She Wrote, or any of the other primetime mystery shows that were broadcasting during the Satanic Panic, but unfortunately for my budding executive producer career, it’s 2021, and this plotline is definitely too cliche for today’s audiences.

Except it’s not fiction, and it is happening today. In fact, it’s happening to Stormy. And that should really kind of scare the pants off of us.

“So how do witch trials even work these days?” Stormy asked, during the greatest telephone conversation of my life. “Am I supposed to bring my own stake?”

“Good point. What should I wear?”

It wasn’t an interview, so I don’t have a full transcript for you — Stormy just wants to bring awareness to her current situation, and through a weird series of events, I got tapped to help with that. But I can tell you that she’s smart, funny, irreverent, and sincere, and her career and religious beliefs have not a goddamn thing to do with whether or not a convicted extortionist took money away from her.

I Saw Goody Daniels Dancing in the Woods with Tituba

Back in May of 2019,  Michael Avenatti, Stormy’s ex-attorney, was charged with wire fraud and identity theft, after allegedly stealing roughly $300,000 from the advance she received for her memoirs. The case is still in court, and on June 18 of this year, Avenatti submitted documents claiming that Stormy should not be allowed to testify or provide evidence, because she works as a paranormal investigator and is a practicing witch.

Stormy [Ms. Clifford in the documents] provided an excerpt on her Facebook page:

“Among many other things, Ms. Clifford has claimed: (1) she ‘sees dead people’ and can communicate with them; (2) she recently helped someone locate a body through her psychic powers; (3) in early 2019, she became obsessed by spirits after moving into a ‘haunted house’ in New Orleans; (4) the spirit that came to live inside of her caused her to physically cut on her own body in an apparent effort to harm herself; (5) the same spirit caused her to bleed profusely from the mouth, eyes and ears, but she did not seek any medical attention; (6) the house caused her then manager and live-in boyfriend, also an important witness in this case because he was privy to communications concerning the book deal, to become obsessed and physically attack Ms. Clifford and attempt to strangle her to death after his eyes turned entirely black; (7) she can turn lights on and off through her thoughts alone; (8) she can see inside structures like homes and apartments without ever setting foot inside; (9) her ‘energy’ causes electronic devices to no longer work and the information on those devices to be deleted; (10) she is a ‘witch’ who practices witchcraft and can rid people of spirits (a ‘service’ for which she charges); and (11) she possesses supernatural powers that allow her to serve as a ‘medium’ to the dead and conduct ‘paranormal investigations.’ Ms. Clifford has consistently made these various claims during numerous audio and video interviews and on social media.”

It’s worth noting that Avenatti doesn’t have much left in the plausibility department, considering he’s currently awaiting sentencing after being convicted for attempting to extort $25 million from Nike, Inc. Additionally, according to the Federal Rules of Evidence (specifically Rule 610), “Evidence of a witness’s religious beliefs or opinions is not admissible to attack or support the witness’s credibility,” so I can’t imagine any judge not rolling their eyes before tossing the docs in the bin.

If I had to hazard a guess, I’d say that Avenatti’s stunt was less about winning the case and more about discrediting Stormy in public, which is more than a little hilarious, considering Stormy really is a witch and a professional paranormal investigator: He might as well have included “blonde” and “five foot seven” in his condemnation. But isn’t that just the American Way? A woman dares to stand up to a man, and instead of apologizing or making amends, the man is like, “Well, she’s crazy,” or “She’s hysterical,” or (as we’ve seen throughout history) “She’s clearly consorting with demons.”

That Said, Here’s Where I Get Nervous

The right to practice non-Abrahamic religions is currently protected under United States law, and, as stated earlier, Stormy’s religious beliefs and profession have no bearing on whether or not Avenatti forged her signature in order to have money that’s rightfully hers transferred into his own account.

But what if the judge decides that psychic ability and mediumship don’t fall under the protection of Rule 610? Moving forward, could witches and spiritual workers be denied basic rights and services if someone decides to question the unrelated “sanity” of their practices? Would Christian spiritual workers be given any leeway for participating in a “rational” religion, or would anyone outside of Protestantism be a target for suspicion and discrimination, regardless of what they do for a living?

Logically, I know that Avenatti’s accusations are just last-minute death rattles before he gets shipped off to the Big House (sentencing in the Nike case is scheduled for June 30, and Stormy’s case isn’t set until August).  But the fact that he’s trying to use her beliefs against her and have her silenced is terrifying, and it should remind all of us that the religious freedom we enjoy is tenuous at best. We need to keep using the resources at our disposal to continue protecting ourselves.

And look, I’m not saying that you should write out Avenatti’s full name (Michael John Avenatti) and stick it in a Tabasco bottle filled with pins, salt, black pepper, red pepper, black mustard seed, and Four Thieves Vinegar, then stash it behind your toilet and give it a good shake once per day until he goes to prison where he belongs. But if you get a chance, do light a candle for Stormy. What’s happening to her could happen to any of us, and a little solidarity right now will go a long way towards keeping all of us safe.

June 18, 2021
It's All Fun and Games Until the Trees Start Hugging Back
Next Post 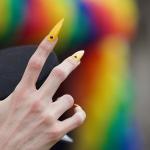 10 responses to “Stormy Justice (and Justice for Stormy)”