“There’s a fine line between hugging and strangling.” –Jenny Lawson

After I originally posted about the Sense Fairy, my friend Nuke commented, “I love it when you tell this story” (he’s heard it more than once), and in response, I was like, “Remind me to tell you about the time she tried to make me hug a tree,” at which point every Witch I know was like, “WE ARE EMOTIONALLY INVESTED IN THIS NARRATIVE AND WILL LITERALLY DIE IF YOU DON’T TELL US ABOUT HUGGING THE TREE.”

Gardnerians are dramatic, y’all. But as I don’t think I could handle that many deaths on my conscience, here is that story.

My coven called him “Grandma’s on Fire and the Baby’s on the Roof,” but Deborah just called him “Thing,” which summed him up pretty concisely.

We had three amazing dates, and then he up and disappeared for several weeks, and I was understandably devastated, but it turned out that instead of ghosting me, he was actually in jail on a DUI charge, although he technically wasn’t drunk when he got pulled over, but apparently his trick knee gave out during the field sobriety test so the cops took him in anyway, and then there was some kind of mix-up where he got transferred from City Jail to County Jail, and there were some other crises in there as well, but he couldn’t call me from lockup because he didn’t have my number, and at some point I learned that he was possibly dating two to four other guys but I figured I was most likely the top contender for his affection and could definitely Fix Him regardless of the fact that he drank more than even I did, and trust, if I’m the one having to hold your hair back while you puke, there is a problem, and what the hell was I talking about again?

So it was our fourth date.

We made plans to meet at a cozy gay bar tucked into a semi-residential area, and when I called to confirm, he was like, “Oh, by the way, a friend of mine will be joining us.”

“Great!” I said, internally huffing at the thought of having to share his attention with anyone else.

“I think you’ll really like her,” he continued. “You and [Sense Fairy] have a lot in common.”

“Oh. I… think we’ve already met,” I said, hoping against hope that maybe there was another woman in the Houston area with the same, distinctive Pagan name.

“Even better!” he said. Then, detecting some hesitation on my part (I have no poker face, even over the phone), he was all, “Haha, yeah, she’s a handful. But I’m glad you two are already friends.”

I made it to the bar a few minutes early that evening, but the Sense Fairy was already there, waiting just inside the door. (My memory is hazy, but I could swear she was wearing a cape.)

“THUMPER!!!” She squealed, flinging her arms around me in an overpowering embrace. Then, darkly: “We’ve got to help Thing.”

I tried to agree, but she had a full head of steam behind her and wasn’t ready to share the conversation.

“What happened to him was a travesty of justice. We need to organize and plan his defense and make it clear to the court that we will not tolerate the discriminatory treatment of anyone within our community and I for one do not believe he was intoxicated and we need to get hold of the dashcam video to prove it because it will completely exonerate him but I’m also going to be speaking with a lawyer because this kind of flagrant disregard for human rights will not stand and-”

“You know,” I said, as she stopped to gasp for air. “Right now, I’m really just relieved he’s okay.”

And as soon as I said that, the song Good Life by One Republic started playing.

You know how a song will just kind of hit funny sometimes? That’s really all that happened: The music started, and the lyrics stirred up some unexpected emotions.

I don’t know that I was expecting any reaction other than maybe a moment of awkward silence, but instead, her eyes widened, then went steely, and her jaw set in determination.

“Come with me,” she said. And she grabbed me by the wrist and dragged me outside.

The back patio of the bar featured several decks sporting benches and picnic tables, with broad, venerable oak trees throughout, and the Sense Fairy marched me up to the largest one.

“You are overwrought,” she said, in a tone suggesting I was experiencing a medical emergency. “We need to balance your energies.”

“I promise I’m fine,” I said. “I had some feels there for a second, but really, everything’s-”

“You are not fine,” she replied resolutely. “Now, what I’m going to show you is a very old technique — your modern tradition wouldn’t be familiar with it — but what you’re going to do is to place your hands on the tree, like this…”

She put her hands against the trunk and turned her face toward me. She looked like she was slow-dancing at a middle school prom.

“See where my hands are? You do the same, then breathe in deeply, and exchange energy with the tree as you exhale. Like this. You’re not doing it.”

She took hold of my wrists again, and I gently but firmly removed her perspirations. She reached for me again, and I took a step back.

“I am fine,” I said. “And I don’t need to exchange energy with anything.”

Frustration was becoming palpable on both sides. Looking back, I probably should’ve just laid hands on the damn tree and been like, “Mmm, all balanced!” But her demand that I feel up bark was turning into a self-serving spectacle, and my own reaction was to dig in my heels and resist.

On the other hand, I can look back from a sober perspective and understand how helpless she felt. Her friend was going through stuff that she couldn’t control, and that was uncomfortable, so she latched onto the first thing she thought she could control… which was, unfortunately for her, me.

Anyway, Thing showed up before the Sense Fairy and I came to blows, and a lovely evening was had all around. And then he pulled another disappearing act, which turned into a repeating, manipulative pattern, and meanwhile, the rest of my life was quickly falling apart, so I finally just admitted defeat, sobered up, and got my shit together. I have not seen either of them in many years, but I occasionally hear tales about the Sense Fairy, so I assume she’s still out there, fighting the good fight and forcing near-strangers to molest perennials.

To be clear, I do not think she’s a bad person at all. But I do think her sense of self-worth is entirely outsourced: She needs the people around her to see her as knowledgeable, and powerful, and helpful, not understanding that all of those things come from within. For example, if she’d really wanted to be helpful to me, she would’ve listened when I said I needed a second to wrangle my feelings and given me that, instead of hauling me into the woods and trying to Heimlich gratitude out of me.

But just like I couldn’t control Thing, or my drinking, I can’t coerce the Sense Fairy into being someone she doesn’t want to be. Although it would be nice to eventually hear someone say, “You know, she’s really learned to accept herself as-is, and she no longer thirsts for outside validation.” If that ever happens, I will totally high-five a tree in her honor. 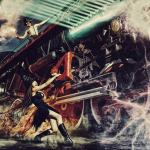