In America, we love our food. We also love our big guns. Why not combine the two?

That’s what the geniuses at Burgers and Bullets did at their tourist attraction outside Las Vegas– come in, grab a bite to eat, and shoot heavy weaponry.

It’s the American way, I guess.

Except, this “brilliant” idea has now led to a tragic consequence. According to the Las Vegas Review-Journal, a 9 year old girl has accidentally shot and killed her instructor with an Uzi:

“The Mohave County Sheriff’s Office said the accidental shooting occurred about 10 a.m. Spokeswoman Trish Carter said the girl, who was vacationing from New Jersey with her parents, was standing next to the instructor at the time.

Mohave County Sheriff Jim McCabe said the girl safely and successfully fired the 9 mm weapon several times when it was set in the “single-shot” mode.

He said the weapon was put into the “fully-automatic” mode before the girl fired again with the instructor standing off to her left. The weapon recoiled and drifted left as the girl squeezed off an undetermined number of rounds as she maintained possession but lost control of the Uzi as it raised up above her head.

“The guy just dropped,” McCabe said of shooting instructor Charles Vacca, 39, of Lake Havasu City, who suffered at least one gunshot to the head.”

My heart aches for the dead instructor, but even more so for the young girl who has now undoubtedly experienced some serious trauma that will take years to deal with appropriately, and will probably always leave a massive emotional scar. We weren’t made to kill people– especially at nine years old! Why in the world her parents thought letting a 9 year old shoot an Uzi, I have no idea.

But hey, these are the kind of things that are going to happen in a gun worshiping culture where we value our “rights” more than we value life in truest form. It’s not the first time this kind of thing has happened, and it will not be the last.

When will this stuff bother us enough to start asking a new set of questions?

I fear the answer is… never. Yet, I pray with hope that the nonviolent Jesus people will continue to challenge culture until this kind of thing is no longer part of it.

August 25, 2014
A Prayer For The Real Lives In The Mark Driscoll Saga
Next Post 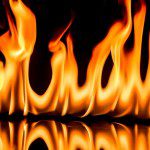