After another botched execution– one where they tried to revive the victim but he died of a heart attack anyway– we’re finally talking again about the death penalty here in America.

The death penalty is perhaps one of the critical issues for this generation of Jesus followers. As more and more Americans are letting go of an American Jesus formed by human hands in exchange for the real-deal found in scripture, we have a tremendous opportunity to subversively make our culture more like the Kingdom Jesus came to inaugurate.

One of those key kingdom issues, is our heinous and ungodly practice of capital punishment. The tide is finally turning against this practice, and we may in fact see this abolished in our lifetime if we have the courage to follow the way of Jesus and insert Jesus principles into the culture around us.

But, not if Al Mohler has anything to do with it.

Today on CNN, Al weighed in on this botched execution with a piece called “Why Christians Should Support The Death Penalty“. In the piece, Al breaks with historic, orthodox Christianity and instead encourages Christians to follow worldly principles of violence, specifically the lex talionis.

Now, he did get one thing right when he said,

“Christians should be outraged at the economic and racial injustice in how the death penalty is applied.”

Absolutely. The death penalty in America is just yet another feather in the cap of a country that is saturated in systemic racism. You’d think that alone would be enough for a Jesus follower to say “I want none of that”, but not so fast– Al wants you to support the death penalty. In fact, he says that if you’re a Christian, you should.

He even goes so far as to say that when we take focus off the condemned and instead place the focus on their state sanctioned murder, that it is a “testimony to moral insanity”.

Funny, because he might as well call the teachings of Jesus “moral insanity”.

Yeah, remember that time when Jesus found himself at a public execution…. of a person who was guilty and deserved death under the law?

Apparently, Al doesn’t. Because what did Jesus do? He flipped the narrative. Not only did he turn attention away from the condemned, but he actually turned his attention on the ones doing the condemning. He “interrupted death” as Shane Claiborne refers to it, and instead pointed out that for one human being to execute another, was a moral impossibility.

According to Al Mohler, what Jesus did was a “testimony to moral insanity”.

I suppose it was also “moral insanity” when Jesus weighed in on the Old Testament law that permitted retributive violence, and actually taught his followers to disobey it. I’m sure the Pharisees would have seen it that way.

Yup, that’s right– Jesus quotes the OT and says “you have heard it said and eye for an eye, but I tell you to love your enemies”. The principle that allowed one to take the life of another, according to Jesus himself, is not to be obeyed by Jesus followers.

Here’s what is perhaps the most ironic: folks like Al Mohler will claim to believe in the inspiration and inerrancy of scripture. They’ll tell you that scripture is “plain to understand” and that it should be obeyed at face value. Yet, when you get to the teachings of Jesus where he overturns the permissiveness of retributive violence, those same “literalists” will all of a sudden jump through the same hoops that the most liberal, scripture-rejecting scholar you can find will jump through, in order to justify a behavior or belief that is clearly condemned in scripture.

Sadly, literalists like Mohler believe in the face value truth of the Bible right up until it conflicts with their own cultural values– at which point they do the same thing that folks on the left do. These same folks see no room to reexamine biblical texts that refer to same sex relations, but have zero problem completely writing off what Jesus directly, plainly, and unequivocally taught about retributive violence.

Apparently, it’s okay to view a passage as not being applicable to the modern age, so long as that’s a passage that gives you permission to take a human life.

Jesus offers a different way. A way that is neither liberal or conservative– it’s a third way. It’s an “other-world” kinda way.

In fact, that’s how Jesus described it: “My Kingdom is not of this world”.

It still isn’t of this world. The way of Jesus won’t support the death of the unborn any more than it will the most vile criminal. It is still, after all this time, other worldly.

I’m sticking with the third option. 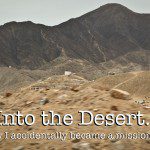 April 30, 2014
Into The Desert: How I Accidentally Became A Missionary (after quitting church)
Next Post

Evangelicals Are Attracted to Conspiracy Theories—Why?
Divergence
Books by This Author Books by Benjamin L. Corey