Our jails are overflowing, people are receiving life sentences for minor crimes under three strikes laws, racial disparities leave minority populations disproportionately represented in the incarcerated population, and we’re so obsessed with killing that we’re now using untested concoctions of drugs that it recently took a condemned inmate over 20 minutes to finally die.

It might surprise you however, to understand how we arrived at such a broken justice system.

We got here because of poor theology.

While we do have a separation of church and state, it is undeniable that through the ages Christian theology has influenced laws, patterns of thinking, and social structures– especially in early America.

One such theology is a theology of the cross. In theological circles we call it “atonement theology”, which has been an area of theology that has been consistently morphing for the past 2000 years. You and I most likely grew up with one specific type of atonement theology which has tended to dominate the landscape since the 16th century or so– an atonement metaphor called “penal substitution”.

If you grew up within conservative Evangelicalism or have seen even one episode of Way of the Master, you are familiar with the penal substitution theory of atonement even if you don’t recognize the theological name I’m using for it. It usually isn’t described as an “atonement metaphor” but rather is passed off as the “Gospel” itself. It goes something like this (if you grew up a fundie, you might remember “Romans Road” to explain it):

–The wages of sin is death (also true)

–Sin can only be forgiven through someone/something dying (not exactly true– even in the OT sacrifices only satisfied unintentional sins, not deliberate ones. We also see Jesus forgive people in the NT prior to the cross, showing God is able to gratuitously forgive without a blood sacrifice.)

–When Jesus was on the cross, he was paying your fine/being punished in your place so that you could be set free (not quite true, or at least distorted/reduced).

Essentially, the cross is explained exclusively in legal terms. You and I are the criminal, God is the blood-thirsty judge and executioner, and Jesus becomes the one who steps in between us and lets the angry judge beat and kill him in our place. Having killed an innocent person this judge is somehow satisfied and a little less angry, so he sets friends of the innocent dead man free as he awaits the “end times” when he’ll finally get to let the bodies hit the floor and feel good about himself.

It’s actually quite twisted when you break it down. Jesus protects us from God? Or, if you accept the inspiration of scripture (which I 100% do) it gets even more uncomfortable when you see Jesus say things like: “If you have seen me, you have seen the father, for we are one”, or in Hebrews, when it is stated that Jesus is the “exact representation of God’s being”.

Accepting both the inspiration of scripture and the penal substitution theory of the atonement, one could actually say that Jesus died to protect us from Jesus.

Which is quite silly, really–  from one aspect this makes God look schizophrenic and on the other, it makes the cross look like a bad case of domestic violence–  something I personally find offensive.

Many of us grew up with this understanding of the cross, yet were never told that this was not the way Christians had historically understood the atonement. This idea began to emerge about 1000 years ago when people began to view the cross as God having his honor “satisfied” (called the “satisfaction theory”) and about another 500 years later it morphed into the concept that God had to punish Jesus in our place in order to forgive us– a concept that has remained the dominant understanding in most Evangelical circles. (I believe this is largely in part to some of the dominant theologians of the reformation periods having backgrounds as attorneys prior to becoming theologians, which gives shape to why they would have preferred to understand the cross in terms of legalities, punishment, etc.)

Historically, Christians had seen the cross as (a) defeating the works of the Devil (1 John 3:8) and that (b) God was in Jesus reconciling all of creation back to himself (Col 1:20). Yet, somehow a beautiful picture of defeating evil and reconciling creation got turned into this idea that God is so angry that he must have his anger satisfied by killing an innocent person. Penal substitution then, causes us to see God’s justice satisfied not because Jesus restored us but because Jesus was properly punished.

How does this play into America’s broken justice system you ask?

For 500 years we have focused our understanding of God and God’s justice as the need for punishment instead of the need for reconciliation, and this has led to a broken framework in our country in regards to justice. When we allow this broken framework to influence the application of justice (as we have) we see criminal acts in terms of “need to punish as justice” instead of “need to restore as justice” (a poor theological understanding that I also feel has led to an Evangelical culture of spanking). Yes, there are many criminal acts that require a person to be removed from society for their protection and for ours, but this theological framework has caused us to view “justice served” when a person receives what we feel is an appropriate sentence instead of seeing “justice served” when both the offender and the offended (even if that’s just society in general) have had their lives reconciled (perhaps not with each other, but in a general sense).

The fact that our prison system has now become defacto mental institutions for individuals who are ill reveals that we are focused on justice as punishment, not justice as restoration and healing.

The fact that we have elderly people in the prison system who look nothing like the act they committed 70 years past– but yet will never see the light of day– tells us that we see justice as punishment meted not as a life changed.

The fact that we currently have more than 2,500 children serving life without parole because of murders committed as juveniles, and 3,200 people serving life without parole for nonviolent offenses, tells us that we prefer a sense of justice that sends people away from society instead of a justice that finds creative ways to restore people to society.

I believe this is largely because we have misunderstood God as someone who will only be satisfied when he has his pound of flesh, and so we do these things and call it “justice served” when in reality, it is “justice broken”.

The cross wasn’t about an angry god who needed to get his punches in to be satisfied, but rather about a loving God who was reversing the narrative and sending the story in the direction of restoration and healing. It wasn’t a horrific act of divine child abuse, but a beautiful act of reconciliation.

However, since we’ve understood the cross in terms of punitive justice, we push forward a culture that is drunk on punitive justice– thus arriving at our current predicament.

The reality is that the cross was an act of restorative justice– God was reconciling everything to himself, and in turn, inviting us to become what Paul called “ministers of reconciliation”– people who go forth and reconcile lives as Jesus reconciled lives.

In order to fix America’s broken framework in regards to justice, we must recover a holistic understanding of what happened on the cross and no longer reduce and distort it into to a punitive legal action. If we do this, we just might begin to build a culture that is hyper focused not on punishing people, but restoring lives.

For a real life example of justice broken, see this short interview with Sara. Sara was a victim of child sex trafficking and serial rape, and killed her trafficker (pimp) when she was 16 years old. She’s now serving life without parole plus four additional years. Apparently, dying behind bars isn’t enough and another four years postmortem was needed.

To go deeper on this issue, here are a few additional short videos:

Life without parole for nonviolent offenses

Life without parole at 16 years old for 2nd degree murder

January 25, 2014
Christian Outsiders: Why The Religious Right Is Losing Control Of The Future Of American Christianity
Next Post 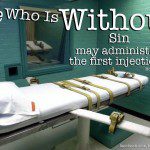 Mitch McConnell’s Government Teacher Would be Appalled
“The American people should have a voice in the selection of their...
view all Progressive Christian blogs
What Are Your Thoughts?leave a comment
Copyright 2008-2020, Patheos. All rights reserved.