But Here’s 5 Reasons Why American Evangelicalism Completely Lost Me 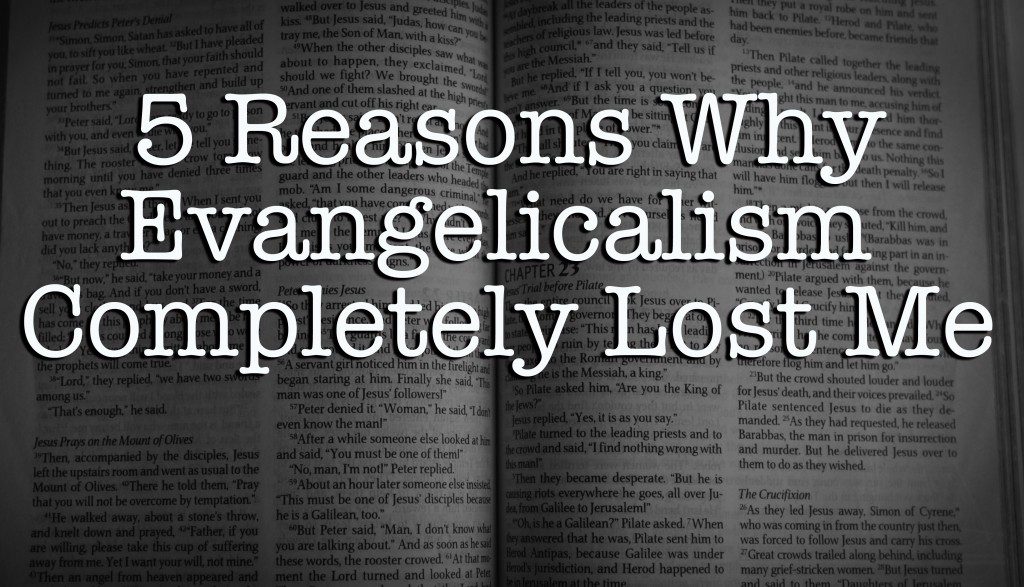 The other day I wrote a post on 5 areas where I find myself unable to connect with some aspects of Progressive Christianity, which has generated plenty of discussion. Some of it has been helpful, and some just proved my point about the need to police the borders of a label. While there are some areas of Progressive Christianity where it loses me, Evangelicalism on the other hand, has completely lost me.

And, since being hated by everyone is a spiritual gift of mine, here are the 5 reasons why I’ll never be returning to Evangelicalism as it is today in America:

5. Today’s Evangelicalism looks more like a political movement than Jesus.

Jesus was someone who avoided getting sucked into secular politics, but today’s Evangelicalism is married to it. In fact, one’s political views are often used as a litmus test for whether or not one is a “true” Evangelical. For those of us who want to give our lives to building God’s other-worldly Kingdom, today’s Evangelicalism isn’t something that is partnering with God and his mission to the world, but something that is a distraction from it.

Just try to have a regular conversation with the average Evangelical– chances are they’ll talk more about the political battles of the day than they’ll speak of Jesus, and that should be a major red flag to anyone who wants to pursue Jesus with reckless abandon. Without their political identity, many Evangelicals would not have a sense of identity at all. We’re called to follow Jesus– wherever that leads and whatever label that earns us– but Evangelicals today seem willing to follow Jesus so much as Jesus lines up with political ideology.

4. Today’s Evangelicalism is obsessed with power.

The invitation of Jesus is to become a “servant of all,” setting aside the need/desire for power so that one can busy themselves taking the lowliest of positions– that of a servant. Since Evangelicalism has become more of a political movement than something that is part of the Jesus movement, its focus has shifted from becoming a servant to gaining and maintaining power.

While I think many Evangelicals probably do want to help spread the way of Jesus, they have bought into the lie that this is done by taking power over culture instead of embracing power under culture (Boyd’s terms). When you combine the quest for power with political ideologies that are completely foreign to Christianity itself, they find themselves in a big mess– which is the state of American Evangelicalism today. Christianity started by the one who had all power becoming the one who totally emptied himself of power, and Jesus followers by definition are invited to do the same.

If there’s one thing that’s going to kill modern Evangelicalism, it’s unteachability. When I ultimately left that crowd, the straw that broke the camel’s back was the realization that far too many Evangelicals aren’t interested in learning anything that is new or different from what they think they already know– even if that new knowledge comes straight from the Bible itself.  This hit home for us at our last church where I was a teaching elder– the church ultimately imploded, and at our final meeting this issue stood loud and clear. During that meeting, one of the other elders turned to me and asked, “how can you teach people that there is no such thing as a rapture?” as if I had said that Jesus wasn’t truly divine or something.

My experience at that last church really brought the issue home for me: too many Evangelicals are willing to learn only if new learning will reenforce what they already believe. There’s little room for growth, reinterpretation, or the constant need for contextualization of the scriptures. For a movement that prides itself on following the scriptures, I’m repeatedly shocked at the unwillingness to see what the scriptures actually say and the willingness to malign those who attempt to point the movement back to the source.

Some great examples from 2014 were when I argued that the Bible doesn’t actually teach a hell where people are consciously tortured for all of eternity, when Matthew Vines came out with his book that argued the Bible doesn’t actually teach that being LGBT is a sin, and another dozen examples I could probably list. In these scenarios, when folks say, “let’s return to the Bible and see if it actually means what we thought it means,” one of the first responses one often gets is the comparison to Satan: “You’re asking the same question Satan asked: ‘hath God really said?‘”

I want to be part of a Christian tradition that is always willing to re-study the scriptures and willing to change and grow as a result. Unfortunately, I don’t see room for this in Evangelicalism– it doesn’t matter if one points to the historic Church or scripture itself– there’s almost no room for wrestling with theology unless it’s geared toward reenforcing a previously held belief.

Out of all the aspects we see of Jesus in the New Testament, the most compelling to me is that I see an outsider who had a heart for other outsiders. Jesus was among the excluded, and lived a life where he was constantly inviting the others who were excluded to come in and have a seat at the table. It’s a theme I just finished writing a book about, and one that seems to leap off the pages when reading the New Testament with a fresh eye. Jesus was passionate about including people one would never think should be included.

Today’s Evangelicalism on the other hand, seems to be in a perpetual cycle of always redefining the lines– not to draw people in, but to keep even more people out. In this past year I think we’ve seen a year where the Evangelical establishment has worked hard to redefine those lines, and to make it clear that this is a very exclusive club. Instead of throwing a banquet and inviting in the outcasts (an image Jesus painted through one of his parables) it seems that Evangelicalism is more concerned with maintaining purity of the label than it is interested in inviting others to see and experience the “Good News” for which Evangelicalism is named after.

This, sadly, is not the way or example of Christ– it’s actually the opposite. Whatever movement I’m part of, I want it to be one that is constantly looking for ways to build bridges and invite people in– not one that looks for ways to build walls in order to keep people out.

This is perhaps the most deeply personal of my reasons, because the tremendous pain that comes with the loss of relationships is destructive on more levels than I can count. Since that moment where I was asked, “How can you teach people there’s no such thing as a rapture?” I’ve experienced what happens to Evangelicals who dare to question, who dare to read their Bibles, and who dare to actually apply some of Jesus’ teachings (such as the command to nonviolently love our enemies): the punishment of having all of my relationships taken away from me.

Whereas a year and a half ago I had a church family and a circle of friends in my local area, today we are completely isolated– all of the friends we had have now packed their bags and left. My daughter has come to me in tears asking, “why doesn’t ____ love us anymore?” and, “why doesn’t ____ want their kids to play with me anymore?” because punishing me by loss of relationships by default punished her by the loss of relationships. I’ve had to sit back and watch my wife shed those same tears (quite frequently), and ask those same exact questions. And, I’ve felt the pain with them– I may be widely read but in my local area, I have a total of one real-world friend left, and even he has admitted the he gets questioned by others as to why he’s friends with me.

Today’s Evangelicalism does this to folks who think outside Evangelical lines– it strips them of relationships, cuts them off, and severs ties. I can’t count the number of emails I get with folks sharing their stories in this regard– it is sadly all too commonplace.

Relationships should never be theological tools that are withed to gain theological conformity– and this is the top reason why I’ll never return even if I still share some of their theological beliefs. Stripping people of relationships is abusive, and I’m not interested in being part of any movement that does this.

In the end, like any other movement, I think Evangelicalism gets some things right. However, these 5 things, especially #1, are deal-breakers for me. 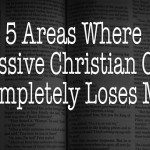 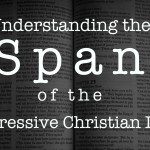 January 5, 2015 Understanding The Span Of The Progressive Christian Label
Recent Comments
476 Comments | Leave a Comment
"Theoretically, and at what level?If we all lived like the greedy folks in Dubai, the ..."
Theodore Seeber You Don’t Have To Be Afraid ..."
"Ben, where are you?"
Bob Shiloh How To Let Life’s Pain Make ..."
"Also nonsense. No matter your faith tradition, the message is the same -- to love ..."
Marc Wagner Letting Go Of Hell (Without Letting ..."
"I am surprised how many modern (even progressive) Christians still cling to the notion of ..."
Marc Wagner Letting Go Of Hell (Without Letting ..."
Browse Our Archives
Related posts from The Official Blog of Benjamin L. Corey