Charisma Mag: Donald Trump Is The New Word of God 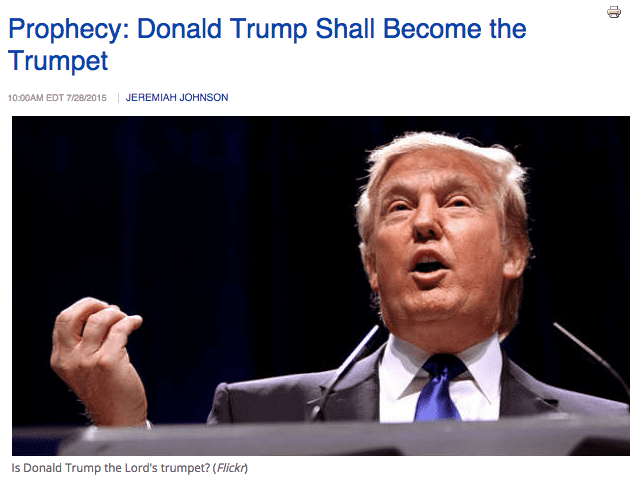 Charisma Mag (I know, I know… I stopped reading them a while ago, but this one came in my FB feed a few times) is broadcasting a prophesy from God: He hath sent us His Holiness Donald Trump (peace and blessings be upon him) to be his mouthpiece (or trumpet, as the prophesy went).

Prophet Jeremiah Johnson says that God spoke to him recently, and God told him he is going to speak to America through Trump himself. Here’s the entire “prophesy”:

“I was in a time of prayer several weeks ago when God began to speak to me concerning the destiny of Donald Trump in America. The Holy Spirit spoke to me and said, “Trump shall become My trumpet to the American people, for he possesses qualities that are even hard to find in My people these days. Trump does not fear man nor will he allow deception and lies to go unnoticed. I am going to use him to expose darkness and perversion in America like never before, but you must understand that he is like a bull in a china closet. Many will want to throw him away because he will disturb their sense of peace and tranquility, but you must listen through the bantering to discover the truth that I will speak through him. I will use the wealth that I have given him to expose and launch investigations searching for the truth. Just as I raised up Cyrus to fulfill My purposes and plans, so have I raised up Trump to fulfill my purposes and plans prior to the 2016 election. You must listen to the trumpet very closely for he will sound the alarm and many will be blessed because of his compassion and mercy. Though many see the outward pride and arrogance, I have given him the tender heart of a father that wants to lend a helping hand to the poor and the needy, to the foreigner and the stranger.“

God has given Trump a tender heart to help the poor and immigrants? People will be blessed by his compassion? Apparently God hasn’t been watching the news. Or seen his twitter feed. Or met him.

Essentially, here’s what Charisma News is saying: Donald Trump is becoming the new Word of God and we need to carefully listen to The Don (peace and blessings be upon him) to discover whatever it is God is telling us.

I’m sorry, but I’m waving a ginormous BS flag on this one.

This is the kind of nonsense that causes folks to be skeptical of Charismatics, and end up making us all look silly via guilt by association.

You want to find out what God wants to say to America?

Here’s a novel idea: let’s open our Bibles and find out what Jesus already said. You know, the Word of God himself?

Please folks, don’t buy into garbage like this. Want to be Charismatic? Wonderful, I’m a little bit myself. But for the love of Lemmy, please stop looking to political leaders when you should be looking to Jesus. It’s called idolatry. And, when you make your idol someone like Donald Trump (peace and blessings be upon him) the idolatry crosses over into pure silliness. 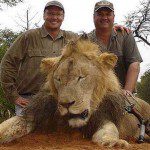 July 29, 2015
Killing Cecil The Lion: Does God Care How We Treat Animals?
Next Post 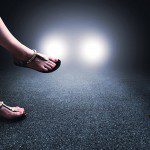 July 30, 2015 "I Am A Human Trafficking Survivor & Here's What I Want To Ask Christian Activists"
Recent Comments
225 Comments | Leave a Comment
Browse Our Archives
Follow Us!

Stop Telling Me about the "Lazy"...
Honest to God
Related posts from The Official Blog of Benjamin L. Corey