Dear Fundamentalist Trolls: You’re Not Helping Anyone (and I say this in love)

As much as it might shock the world to hear me say this, you and I are technically on the same team. I know you don’t believe we are, but if you consider yourself to be a Christian and follower of Jesus, we’re both part of the Church, with a capital “C”. That means, like it or not, we’re ultimately stuck in the same tribe together.

While we probably radically disagree on many things, I think that at the core level we both have the same desire and goal: to introduce people to Jesus. Think of me whatever you want, but I sit here day in and day out– like so many other Christian writers– writing for one reason: I think Jesus is awesome and I want the whole world to know about him.

I think if I were to strip away some ancillary elements of your worldview, I just might find that same core desire. In fact, I’d even bet on it.

But here’s the kicker– and why we really need to have this family meeting: you’re not actually helping. In fact, if your goal is to help introduce people to Jesus, you’re actually achieving the opposite of your stated goal. Not only that, but you’re actively harming the efforts of those of us who are purposeful and attempt to use extreme care with how we communicate the message of Jesus.

The way you’re going about this is just so… destructive. Destructive for all of us.

The comments. The attacking. The rarely choosing to contribute something something thoughtful to a conversation. The condemning people you don’t even know other than their disqus username.

None of it is helping us demonstrate that following Jesus might actually be the best way to live.

In fact, if I were on the fence about Jesus, bumping into a lot of you would be a powerful motivator to stay as far away from his tribe as possible. And if I, someone who has put his whole life on the line to follow Jesus feels that way, I can’t help but wonder how those on the fence feel.

And that’s not what you really want, is it? I can’t possibly fathom that you actually desire to push people away from giving Jesus a shot. I have to be honest though, that’s precisely what your online behavior is doing.

I imagine that you probably don’t want my advice, but I hope you’ll forget for a moment that it’s me giving it to you, and just evaluate the content for whatever it’s worth. Yes, I know I’m a provocative blogger, but I’m also a Missiologist. That basically means I’m a theologian who studies the most effective ways to communicate theology from one culture to another and that I might actually have some useful information for you. So, here are some questions I would urge you to ask yourself PRIOR to posting a comment on the internet:

“Is my tone loving?”

If your tone isn’t loving people will know it, and since you’re supposed to be representing the God who IS LOVE (1 John 4), an unloving tone isn’t a very good representation of the God you’re attempting to point people to.

Now, I know what you’re thinking– you think it’s okay to judge as long as you’re judging rightly. Even if you’re correct on that, please consider however that Paul tells us we have NO business judging outsiders. You don’t know these people you’re writing to– you don’t know their history, their life, their heart, you don’t know anything other than the comment that prompted your reply. This means you don’t have the information one would need (and ultimately only God has) to judge– so don’t do it in an online discussion with a stranger.

“Would I make this comment, and make it the same way, if I were having a face to face conversation with this person?”

Something about the anonymity of the internet makes some people crazy– so ask yourself, is this how you’d handle the conversation if you were having coffee with them in their living room? I can’t imagine that people would behave this way if we were all sitting down together for coffee or for a meal. Remember, kindness and hospitality need not only be reserved for when guests are in your house.

“Does this comment make the message of Jesus more attractive?”

As Paul teaches in the book of Titus, we are to be living and communicating in such a way that makes “the Gospel of Jesus attractive”. Let’s be honest: you know that your comments aren’t received as loving, that they are received as judgmental or arrogant, and I’m sure you know that it’s not actually making the gospel of Jesus “attractive” to anyone. So why keep doing it? If you’re not making Jesus look more attractive rather than less attractive, if you’re not pulling people in but are pushing people away, the comment is NOT biblical or God-honoring.

If it’s not one of those three, pass on the comment because it won’t do a single thing to make the other person’s life any better.

And I don’t mean your version of Jesus, I’m talking about the real-deal Sermon on the Mount Jesus. If it’s not something Jesus would say, don’t say it. At best it’s going to confuse people searching for Jesus, and at worst it’s going to anger people who know that the comment isn’t very Jesus-like.

Seriously my trolling friends– I get what you’re doing. I think you probably have a good motive and heart– you just want to point people to Jesus. You want to “defend the faith”. I get it. I actually even appreciate it.

But, and I say this in absolute love,

So please– stop for a moment, take a deep breath, and start asking some new questions: is my tone loving? Am I judging? Am I being helpful? Am I speaking like Jesus?

If you give these questions a shot, I promise you’ll start seeing people respond to you differently– and as a result, they’ll respond more favorably to the Jesus you’re trying to preach as well.

September 3, 2014
Duck Dynasty And Dealing With ISIS
Next Post 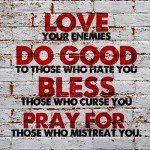 September 11, 2014 Remembering to Pray for Terrorists on 9-11
Recent Comments
353 Comments | Leave a Comment
Browse Our Archives
Related posts from The Official Blog of Benjamin L. Corey