People wonder why I push back against gun culture so hard, and well, the guy in this NRA News video is my answer.

The commentary argues from the standpoint that instead of anti-gun policies we need policies that assume people need guns and that “guns make life better”. In the perfect world he describes, people would be encouraged to be weaponized at all times, and would even be rewarded for doing so.

And so much for “gun free zones”, in this crazy utopia we’d have “gun required zones”. I’m not even making this up.

He goes as far as to say that we could make learning how to use weapons a mandatory part of a child’s education, and that: “These policies would insist that we introduce kids to guns early… It wouldn’t matter if they didn’t want to learn. We would make it necessary to advance to the next grade.”

I think what’s particularly sad is that I doubt this guy is a fringe nut-job– okay, well he clearly is– but what concerns me is that views along this line might be more prevalent than we dare to believe. I’ve known people like the guy in the video, and it’s downright scary that there are so many of them.

I’m not a fan of culture wars, but I can’t help but think our generation is going to be faced with the question of how to come up with better ideas on the whole issue of guns and American culture.

In the meantime, the only solution I know of is to keep teaching Jesus– because Jesus is the opposite of all of this weapon love. So that’s what I’ll do.

So, the next time you wonder why I use terms like “gundamentalists”, just know that I’m not doing it to lob a bomb over the fence– I use the term because they actually exist.

July 24, 2014
So Listen-- It's Not Religious Discrimination Just Because You Can't Discriminate.
Next Post 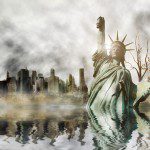 10 Things You Can't Vote For...
The God Article with Mark Sandlin
Books by This Author Books by Benjamin L. Corey