I’m Sorry, But Donald Trump Is NOT “Pro-Life”

As we’ve watched the election unfold during this painfully long political season, we’ve watched Evangelical Christians swing from one extreme to another. During the primary season, Evangelicals were overwhelmingly vocal about how horrid Donald Trump is as a presidential candidate, at one point sparking the whole #NeverTrump movement. Yet, when he became the nominee, they finally got on board– at least most of them.

Time and time again, the Evangelical justification for supporting Trump basically boils down to one point: He’s “pro-life.”

But that’s almost irrelevant– because I’m sorry, but Donald Trump is not “pro-life.”

At the heart and core of what it means to be pro-life is a deep, unshakable belief, that all life has infinite worth and value, and that this innate worth should be something we as a culture honor and value.

That’s where being pro-life begins– and Donald Trump doesn’t share that foundational belief.

Trump may claim to share that foundational belief, but his behavior shows us otherwise– and the Bible reminds us that we can know a good tree from a bad tree by the fruit that it bears.

I mean, ‘cmon, people. Let’s actually use the brains God gave us and think this one through.

Nothing about saying, “I like to just grab women by the pussy” reflects a view that all people have sacred value and that they should be honored.

Nothing about mocking people with physical disabilities says that a person holds a foundational belief that all life has worth and value.

Nothing about grabbing a woman and kissing her without consent, telling an employee that she’d “look really good down on her knees,” or saying that it’s hard for women with small breasts to be beautiful, tells us this is a man who believes that the image of God in others must be honored and protected.

Nothing about deporting the undocumented parents of U.S. born children, destroying family units and creating orphans, speaks to a foundational belief about the value of human life.

Nothing about advocating that we kill the entire families of suspected terrorists tells us that he believes that all life is sacred.

In fact, I don’t even need continue this list in order to realize that not only is it patently untrue that Donal Trump is pro-life, it would be more accurate to say that Donald Trump is the least pro-life candidate to run for president in modern history.

To claim that Donal Trump is pro-life is to say that one can belong to a movement without *actually* believing the foundational beliefs that a given movement is based upon.

There’s plenty of room for disagreement in what it means to be pro-life. Some pro-life people believe in criminalizing abortion (overturning Roe v. Wade), while others of us believe that this would be both ineffective and actually cause more harm without reducing abortions. Some believe in preaching about it on the street corner, while some of us prefer to live more quiet lives that cultivate a culture of life.

But what do we all agree on? The one belief we all share in common is that human life is sacred, that it should be valued, protected, and honored.

We disagre and debate on a lot of things. But what we don’t disagree on is the ethical premise: all life is sacred.

Unregistered sex offender Donald Trump doesn’t share that belief– his actions on a daily basis bear witness to that truth.

So, I’m sorry– but no, Donald Trump is not pro-life.

And if you think he is, well, then I think you’ve profoundly missed the entire ethical premise behind the term.

October 28, 2016
No, LGBTQ+ Affirming Christians Are Not Heretics
Next Post 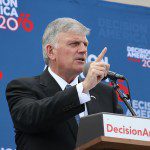 November 10, 2016 Why Franklin Graham Had Better Hope That Progressive Christians Were Right About Hell
Recent Comments
926 Comments | Leave a Comment
Browse Our Archives
Related posts from The Official Blog of Benjamin L. Corey