Genesis 1: It Doesn’t Have To Be True In Order To Still Be True

As I wrote about yesterday, the upcoming debate at the creation museum is causing quite the stir– something that I think is great, because one of the areas in American Christianity where we need more dialogue is around recovering a bit more peace amidst the tension that some of the Old Testament stories cause among us.

Right now, that happens to be the creation poem found in Genesis 1, but there are a host of examples that could serve as good discussion points in this dialogue. Unfortunately, we’ve again found ourselves with two rather extreme viewpoints in my opinion, one being that creation evolved out of nothing and the other being that the narrative found in Genesis 1 can only be interpreted in a strict literal sense in order to be true. As I mentioned yesterday, neither option is one that I find compelling– one side leaves a creator God completely out of the framework, while the other forces a beautiful text born out of oral cultures that told stories such as the creation poem, to become something I don’t believe it was ever intended: a matter-of-fact scientific text.

The truth (that which corresponds to reality) I believe, is found somewhere between these two sides.

A good starting point in this general discussion is to realize that some of the Old Testament stories don’t have to be true in order to still be true.

In regard to hermeneutics, discovering “truth” in a biblical passage speaks to authorial intent. I don’t believe the “truth” is always the plain text itself (though certainly other theologians would disagree with me), but rather the message intended to be conveyed through that text. When we approach, say Genesis 1, we have to ask ourselves “what truth did the author intend to convey?” If the author of Genesis intended to convey that God created the earth 7,000 years ago in a period of six, 24 hour days, that would be what was “true” about the passage. But what if that’s not what the authorial intent was?

Truth, in such a case, would be something different– something deeper.

Interpreting Genesis 1 the way that many, such as Ken Ham, are doing today, I believe misses authorial intent– and church history agrees with me. Understanding a young-earth, literal 24 hour creation period is a relatively new viewpoint. Many of the church fathers saw the “days” in Genesis as speaking to periods of time (the Hebrew word used for “day” in Genesis can mean 12 hours, 24 hours, or also be used to speak of a much longer period of time), and the young earth movement is largely based upon Ussher’s work in the 1600’s. So, my viewpoint regarding Genesis is actually more in harmony with the church fathers than that of Ham and other modern creationists who insist on a strict literal interpretation of Genesis 1.

The question becomes: what “truth” did the author of the creation poem intend to convey?

Since Genesis 1 is clearly poetic in form, and was likely written down after generations of the story being used in the context of an oral (as opposed to book) culture, I think it is safe to say what the text was not– that being a text intended to convey scientific fact in the way 21st Century book cultures would write something intended to convey scientific fact. Imagine how it was used for generations before being written down: sitting around a campfire, looking up at the heavens, and reciting a beautiful story about a God who created everything you see around you.

And this, I believe, is where we find what is true about Genesis 1.

There is a God… and this God created everything you see around you.

When we get lost in these debates over truth, I think we actually can miss what is really true.

Did God create everything in recent history, using just six, 24 hour days? I don’t believe so. Some things don’t have to be true in order to still be true. Instead, what’s true is that he is the agent who created it– the grass, the trees, the abundant life in the oceans, all of the animals that graze from the plains of Africa to the foothills of Maine, all the way down to you and me.

That, I believe, is the truth that is intended to be conveyed when we read Genesis 1.

Another great example is the story of Jonah and the whale: did he really get swallowed by a “big fish” and live in it for three days? I think that discussion actually misses the point– what’s true about the story isn’t necessary getting swallowed by a fish. It’s a story about a God who invited a man to embrace a calling to show God’s love to his enemies– but he refused, and ran from God’s call on his life. As a result, he became miserable and found himself in a dark and lonely place, because he refused to embrace who God made him to be.

So, this story, likewise need not be true in order to still be true– because the truth of the story (embrace God’s call on your life and who he made you– don’t run from it) goes deeper than what we initially see from the plain text itself.

Genesis, was not written in an attempt to write a science book. It was intended to convey a beautiful truth: there is a God, and this God made everything in the universe.

My hope is that for many of us who wrestle with difficult parts of the Old Testament, that we’ll find freedom to embrace these stories– gleaning truth and wisdom from them, instead of getting lost in the tiresome literal or metaphoric debate– if you look hard enough, there’s a third option.

It simply requires us to look a little deeper than the surface of the text, where we find that things need not always be true in order to still be true.

(for more on this topic, be sure to read this important article I previously wrote on Literal vs. Metaphoric or are we asking the wrong question?) 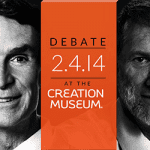 January 14, 2014
Creationist Ken Ham vs. Bill Nye the Science Guy: Why I'm Forced To Root Against Creationism
Next Post

January 16, 2014 Pat Robertson Says: "Corey and McGrath Are Right, and Ken Ham Is So Wrong It's Not Even Funny"
Recent Comments
42 Comments | Leave a Comment
"The true Christian is known by the fruit of the spirit flowing through them. As ..."
Herm There’s Only Two Types Of “Christian” ..."
"The term "Colored People" is pejorative. as what is the "color" are you speaking about? ..."
Judgeforyourself37 If God Is So Pro-Death Penalty, ..."
"I am. I was a Catholic when I attended church. None of those reasons apply ..."
Bob Shiloh 10 Reasons Why People Leave Church
"https://itsstilltime.files...."
rationalobservations? 10 Reasons Why People Leave Church
Browse Our Archives
get the latest from
Progressive Christian
Sign up for our newsletter
POPULAR AT PATHEOS Progressive Christian
1

Beth Moore And The Bible: It...
The Thoughtful Pastor
Books by This Author Books by Benjamin L. Corey