Please consider that regardless of whether you’re able to fully accept this or not, there are gay Christians.

Like I said yesterday, perhaps your theology on the issue might not ever change or evolve, but please know, these are real people you’re talking about. This isn’t just a “concept” or an inanimate object– these are real live Christian brothers and sisters that deserve every bit of love and empathy as anyone else. Maybe you haven’t counseled the teenager in your church who wants to kill themselves because they’re finally realizing that they’re gay and always have been. Maybe you haven’t had a friend weep in your presence over the fact that they realize they are gay, but also realize they did not chose to be– and that they’ll never be accepted by the tribe. Maybe you haven’t had a chance to serve in church for years on end next to someone who you never realized was in fact, gay the whole time and also unwavering in their love for Jesus and commitment to the church.

These things have happened to me, but I get that maybe you’ve never experienced them. So please, just consider that we are not talking about an “issue” here– we’re talking about real people. People created in the image and likeness of God. People with feelings, passions, hopes, and dreams. When we allow this to simply become an “issue” within modern Christian discourse, we end up dehumanizing the very real people we’re actually referencing.

Please become willing to reexamine what the Bible teaches on homosexuality.

The apostle Paul taught that the church at Berea was “more noble” than other churches because they didn’t blindly believe what he taught, but instead studied the scriptures for an answer. Would you be willing to do what the church at Berea did, and reexamine what is, or may not be, in scripture? Remember- when looking at scripture there are all sorts of things to consider, such as historical context, the original language, etc. While such exegesis is encouraged in many other theological areas (such as women covering their heads) it’s not often encouraged on this issue. I would invite you to reexamine these passages and consider the same factors we consider when interpreting or applying any other part of scripture. 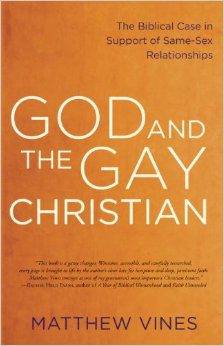 If you’re willing to do this, Matthew Vines has a great new book with does exactly that– God and the Gay Christian— and I would strongly urge you to read it. Matthew is a conservative evangelical who writes from a conservative evangelical perspective, and does an outstanding job at showing that there is a very legitimate, alternate understanding of some of these texts. When considering any issue, it is important to take into account and give an honest ear to all sides of an issue. Rarely has a conservative evangelical done what Vines has done, and I would strongly encourage you to read it, and consider the arguments he makes as you formulate your own opinion on what the Bible does, or does not, teach on the issue.

Even if you don’t agree with Matthew in the end, his book will help you to realize that many people affirm monogamous, same sex marriage without discarding the Bible. I know to some of you that might sound crazy, which is really why you should read the book– from one conservative evangelical to another. I think what Matt has done is huge: at a minimum, he has helped to show there is an alternative biblical understanding which should firmly place this issue into the category of “secondary theology” where Christian charity should leave room for disagreement without declaring who is in, and who is out.

Please consider that we treat our gay brothers and sisters differently than everyone else, and even if you’re right– this behavior is wrong.

Let’s say your theology doesn’t change and that you even turn out to be correct in that homosexuality is a sin. Still, you face a cultural issue that one should find appalling– the fact that we’ve basically forced gay Christians to go out and get their own churches instead of being welcomed at ours.

Greg Boyd shows the absurdity of what we’ve done in his book, Repenting of Religion (one of my favorites– and will provoke you in good ways. Greg once said that he lost 1000 members of his church when he wrote it). In the book, Greg points out that America has an obesity epidemic and that much of the time, the obesity is caused by gluttony (over eating)– which is a sin. Furthermore, we know that over-eating is also greed (taking more than what you need), which the Bible calls idol worship (Col 3:5, Eph 5:5). Boyd’s question then becomes (as does mine): if we make gay Christians go out and get their own churches, why are we not forcing people who are obese due to over eating to go out and get their own churches as well? Obviously, we’d never dream of such a thing– the sin of over eating is culturally acceptable, so we ignore the teachings of scripture on it most of the time. On a more practical level, as Boyd points out, we know the reasons why a person may over eat are complex, personal, and unknown to us– which means that only God can judge them, since God is the only one who understands the whole picture.

Therefore, even if homosexuality is a sin, following this line of thinking, we should be using the same standard that we use with people who are obese from over eating: love them, include them, and refrain from judging them. The fact that we have created an entire, separate way of viewing and treating our gay brothers and sisters, is nothing short of corporate sin.

We’d rarely- if ever- treat these people the way LGBTQ people get treated, and that should be a deeply concerning realization. The fact that one group, and only one group, has been effectively marginalized from the church (you know, that thing that’s supposed to represent Jesus here on earth) should cause us tremendous sorrow.

Please consider that even if you’re right, it shouldn’t dramatically change the praxis of your faith.

Tuesday I was with my friend and fellow author, Frank Schaeffer and he was telling me a story about his parents. They were theologically conservative on the issue of homosexuality, but as Frank describes, were “glorious hypocrites” because they were so loving to their gay friends in their day to day living. Ultimately, I think the correctness of a theological opinion is somewhat irrelevant in comparison to personal behavior– a truth Jesus taught in Matthew 25. Consider all sides and still think it’s a sin? Have at it– but please consider being a glorious hypocrite on the issue, as we are on so many others, by choosing radical love for other people instead of planting your flag in the rightness of correct belief.

There’s no reason why this issue should change the praxis of your faith, either. We’re all just trying to follow Jesus, and we should be so focused on our own issues that we lack the time to focus on the perceived issues of others.

Please consider that the cultural obsession with homosexuality within the American Church is detracting from the things Jesus asked us to do.

Later today I’ll be releasing an interview I shot Tuesday with Frank Schaeffer regarding his new book, Why I’m An Atheist Who Believes In God. In the book, he writes that “Jesus was a traitor to the culture wars of his day”, because the message Jesus came to bring didn’t line up with the battles the current culture wanted to fight. The same is true today– it is American Christian culture who has placed this issue at the front and center and convinced much of the culture that this is “the” war worth fighting. Meanwhile, in the past two years I’ve met with rescued slaves in India, orphans in Africa, seen kids in third world countries drink water that could easily kill them, and watched the homeless trot off into the streets during a New England blizzard. There are real, pressing issues we could devote our time to– but the whole anti-gay battle? That’s a distraction from the real issues facing our world– issues we can actually impact if we don’t get caught up into fabricated culture wars. So, please consider being like Jesus– be a traitor to the culture wars of today, and focus on the issues that really matter.

As I said, I believe this to be an issue that should be kept to secondary theology that still allows for Christian unity and that regardless of where our theology lands, it should not impact the praxis of our faith. I understand this is a hard issue for many of you to wrestle with, and this post isn’t one where I’m trying to provoke you or get in your face– I just humbly ask, that you please consider these few things… and see what might change within your own heart.

May 28, 2014
Yes, Gay Christians Exist (A Sincere Plea To My Conservative Friends)
Next Post 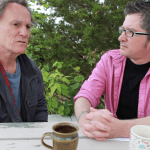 May 30, 2014 When Two Formerly Fundies Chat: My Video Interview With Frank Schaeffer (and get his new book FREE)!
Recent Comments
775 Comments | Leave a Comment
"Ben, I don't know if you read these old blogs anymore; it's been three years. ..."
Bob Shiloh Christian Ghosting: The Destructive Christian Practice ..."
"God Bless and protect you Sam...."
Bob Shiloh What To Do When You’re Not ..."
"Fear doesn't keep somebody from having a relationship with God.It keeps people from believing that ..."
Kenneth James Abbott No, God Isn’t Like Some Stephen ..."
"Amen. I wondered if you would see this comment.This site is so lame that even ..."
Bob Shiloh No, God Isn’t Like Some Stephen ..."
Browse Our Archives
Follow Us!

Why are so many Christians such...
John Shore
Books by This Author Books by Benjamin L. Corey

The Peripatetic Preacher God: The Problem
I obviously having absolutely nothing genuinely new to add to the discussion...
view all Progressive Christian blogs
What Are Your Thoughts?leave a comment
Copyright 2008-2020, Patheos. All rights reserved.