There’s Only Two Types Of “Christian” (And You Should Be Able To Tell The Difference) February 14, 2017 Benjamin L. Corey

As one who studies culture for a living– most specifically, religious culture, I will tell you that technically there are over 40,000 Christian sects in the world.

But realistically? There’s only two kinds of Christian– and honestly, I’m tired of pretending there’s not.

It doesn’t matter what kind (denomination) of Christian you are; there are still only two types: one is the member of a Christian religion, and the other is someone who is actively living like Jesus.

I don’t believe the word “Christian” was ever intended to be used the way we use it in America. When it was first used, the term wasn’t in reference to a well-crafted religion with a long list of tenets, but instead was simply used to describe people who actively did what Jesus said to do. Essentially, the word meant “little Christs.”

Do they follow the teachings of Jesus, or not?

But that’s not what the term has come to mean in Americanized Christianity. For many of us growing up, if you said a simple prayer at the end of a sermon and “asked Jesus into your heart” you were automatically a Christian. Becoming a Christian was something done in secret, in the most quiet place in your heart. You repeat the words given to you and signify your transition into the group by quietly lifting your hand with “every head bowed, every eye closed,” and at the end you’re part of the group. Since becoming a Christian was internal and not external, there was really no way to know who was a Christian and who wasn’t.

It strikes me that American Evangelicalism invented an entirely new version of the Christian religion with its own concept of “salvation,” and the consequences of this religion are dire. It has taken the message of Jesus and the biblical mandate to pattern our lives after Jesus, and in so many was reduced it to the near-effortless act of “accepting Christ into your heart.” In fact, it’s become a bizarre religion where one can actually refer to themselves as a Christian while simultaneously disagreeing with what Jesus taught.

That’s not how this thing was originally supposed to work, folks. If one disagrees with Jesus, the word Christian ought not apply.

The confusion of having two types of Christian and a totally different use of the word, creates all sorts of problems. Mainly, it has the ability to lull people into the idea that they’re Christian when often they’re not– at least, not in the original sense. It also complicates things for those of us who want to teach others to be Christian, because we’re no longer able to easily do what was done 2,000 years ago– we’re not able to walk with new disciples and show them, “Here is an example of Christian. Here is an example of not Christian.“

Case in point: Franklin Graham. The other day I stated that he was not Christian (in response to his anti-immigrant/anti-refugee beliefs), and of course, I immediately got the expected push-back to such a statement.

Or, of course, some will ask rightly, “is it your job to decide who is or is not a Christian?”

Since Christian has come to mean something different in Americanized Christianity, these objections are totally valid. Since we are operating in a culture where Christian is a noun, and where anyone can secretly be one regardless of what they think about what Jesus said, I don’t know who is that type of Christian and who isn’t. Certainly I don’t know if Franklin Graham has ever asked Jesus into his heart, though I would bank on the fact that he has. Neither is it my place to declare who is part of the Christian religion or not– there’s ultimately 40,000 versions of that and I am not the gate keeper for any of them, let alone all 40,000.

But to me, there are only two types of Christian, and the second one– an adjective instead of a noun, is observable. It doesn’t require the ability to judge the individual heart. It is not something that can only be done by a gate-keeper as if they have any power anyway. It is simply the act of returning Christian to an adjective, and being honest in that it does not apply to people don’t want to do what Jesus said to do.

For all the damage that Americanized Christianity has done, the foundational damage is that it has distorted the word that was first used to describe the disciples of Jesus: Christian.

Instead of describing members of a religion, the word used to mean something so much more. It used to describe what people were doing, and who they were following. It used to be so loaded with meaning that the act of being Christian was totally observable and obvious to anyone around you.

The reality in Americanized Christianity is that you can be “a Christian” without actually being “Christian.” They are two, totally distinct identities.

That’s not how it’s supposed to work.

Christian used to actually mean something, and I don’t think we should be afraid to say it. 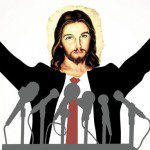 February 10, 2017
5 Ways To Be Political The Way Jesus & Early Christians Were Political
Next Post

February 17, 2017 Biblical Salvation: How It's Possible To Be A Christian And Still Not Be "Saved"
Recent Comments
343 Comments | Leave a Comment
"Interesting article. Makes sense."
Michael Donahoe 5 Reasons Why Many American Christians ..."
"So does the devil..."
Steven Waling 5 Reasons Why More Christians Are ..."
"The parable of the Rich Young Man is in both Mark and Luke. I'm not ..."
Kevin R. Cross There’s Only Two Types Of “Christian” ..."
"I appreciate this article, but for all the lifting up of scholarly study and academic ..."
John Creasy What Jesus Talked About When He ..."
Browse Our Archives
get the latest from
Progressive Christian
Sign up for our newsletter
POPULAR AT PATHEOS Progressive Christian
1

5 Books That Can Change Your...
All Set Free
Books by This Author Books by Benjamin L. Corey