If you’re not up to speed on what’s happening in Ferguson, Missouri, I hope you’ll go read up. What’s happening right now is a window into a very important chapter in our nation’s history– a chapter that will challenge us, and invite us to change if we’re willing.

After talking about the unjust killing of Michael Brown, and so many others like him, and after combing many of the messages I’ve received as a result, I’ve come to a conclusion:

We’re still not ready (at least on a large scale) to admit to the existence of systemic racism in America. Just bringing the issue up got me called a “race baiter”, “ignorant”, and all sorts of other stuff– but whatever.

The realization that we’re completely unwilling to admit to the existence of systemic racism saddens me, but something I believe to be true nonetheless. The piece that completely tipped the scale for me was this piece which illustrates the response to protestors in Ferguson compared to protesters at the Bundy Ranch. At the Bundy Ranch, armed whites confronted the government to stand along side a rancher who’s been stealing from the government. They went as far as having weapons drawn on the police– and the response? The government backed down.

Compare that to Ferguson, where protesters have been met with police who were more armed up than the folks I served next to in Operation Allied Force (and I’m not even kidding).

It’s all just so… insane.

The question becomes, why? Why is it so difficult for us to just stop, look around at our country, and humbly admit, “yes, American culture still exhibits systemic racism”?

1. If we admit to the existence of systemic racism in America, it will prove false the American narrative so many of us grew up believing.

I grew up believing in American Exceptionalism, the idea that we’re the greatest country in the history of the world. To further the narrative, we were taught that America was a “Christian” nation founded on “Christian” principles. However, if it’s true that wide-spread systemic racism exists in America, the narrative we were taught cannot be true. The “greatest nation in the history of the world” wouldn’t oppress people because of race. A “Christian” nation wouldn’t be busy maintaining a justice system that disproportionately impacts minorities.

We can’t admit that systemic racism exists, because that will mean the narrative we were taught about America is a huge lie.

2. If we admit to the existence of systemic racism in America, it makes us guilty.

Those of us who are Christian are probably well aware of the concept of sin. However, in many versions of Christianity, sin has been reduced to a wrong action of an individual– we have completely lost sight of the concept of “corporate sin”, which is wrong action by an entire group of people. Systemic racism is a corporate sin, and all of us who prop up, support, or tolerate the system, bear part of the guilt. We can’t admit to the existence of systemic racism because admitting such a truth would mean admitting that we have done something wrong– either directly, or by neglect. Remember, the Bible defines sin not just as a wrong action but also as a failing to take a good action (James 4:17). We don’t want to admit it because we’d have to admit that we’ve been complicit in the sin by not addressing the sin.

3.  If we admit to the existence of systemic racism, it would demand costly change.

Change is never all that popular, but costly change is even less popular. If we were to admit to systemic racism we would also have to admit that something needs to change– and ridding ourselves of a system that is tilted overwhelmingly in our own favor would be too painful and too costly. Let’s just be honest: we enjoy the privilege we have, and for many of us, it feels like the system is “working” because it’s all rigged to work in our favor. Changing the system and reforming the culture so that others can be equal to us in all respects? That would be too costly and painful of a process.

I get it. There’s always going to be a giant mix of people in this country, and some are going to insist on sticking their heads in the sand. Many will opt to live comfortably with a faux sense of living “justly” instead of the far more difficult choice to live and walk in truth.

However, for those who are Jesus followers, we have an important role in all this– one that we cannot reject and still call ourselves Jesus followers. We have been called to be “ministers of reconciliation” to the world– people who reject power and privilege in order to live lives that reconcile people, reform broken systems, and make the world a little more just.

I believe that part of the task for Jesus followers in this time, in this place, and within this culture, is to usher in a season of reconciliation for our country. It will be hard work, it will make you unpopular, and it will involve some costly choices. While I believe that there are thousands ready to live like Jesus lived and to carry on his message of empathy, inclusion, and reconciliation, we must first face the following fact:

May we, the people of Jesus, live in reality– even if it is a difficult reality that invites us to sacrificial change. 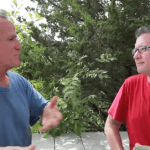 QAnon and Gullible Christians: The Devil...
The Thoughtful Pastor
Books by This Author Books by Benjamin L. Corey

The Return of Ancient Artifacts to their Nations...
I am writing a book in my Still Here series on biblical...
view all Progressive Christian blogs
What Are Your Thoughts?leave a comment
Copyright 2008-2020, Patheos. All rights reserved.