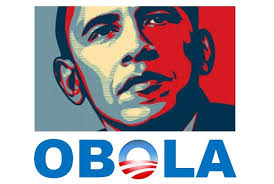 The white/Fox News/Tea Party/Republican/American reaction to Ebola is moving into the high gear of xenophobia, victimology and fear of the other… and a thank-you-Jesus! phase of naked opportunism: Ebola is just what’s needed to help win control of the Senate for the Republicans!

Once again ignorant white people, who fear the wider world–the world where high speed trains work, there is healthcare for all and a good education is a right–and who dismiss Christian charity as “socialism,” are about to find a new lie to comfort themselves with:

And that’s the “respectable” white Republicans in Congress and Fox News talking. At the millions-strong conspiracy idiot-fringe of course (the sludge that produced and circulated the thousands of online types of silly-to-ugly anti-Obama defamation shown above) there will be talk that “He did it on purpose!”

“He” of course is President Obama. We’ve been watching a slow motion lynching of this moderate brilliant family man, a father, and faithful loving husband for near on 8 years now. He’s been accused by every kind of lie. Now he’s in the White House when God is sending us a biblical-style plague! Need more proof Obama is the devil? Need more proof God is on the side of the Republicans taking back the Senate?

I am a white privileged well off 62-old former Republican religious right wing activist who changed his mind about religion and politics long ago.  The New York Times profiled my change of heart saying that to my former friends I’m considered a “traitorous prince” since my religious right family was once thought of as “evangelical royalty.”

I’ve just spent the last 8 years writing over 200,000 words in blogs and articles in support of President Obama. My blogs on the Huffington Post alone would add up to a book in support of the President of over 300 pages. Weirdly, I have realized that through all this pro-Obama writing, this has been the first time in my life I’ve personally gone to bat for a black man. It just happens that he’s a president. But my emotional stake in his life is now personal.

The Republicans in Congress are so dedicated to lynching the President they’ve been willing to shut down our government and risk the future of our economy. Now they are on their knees thanking their white mean “god” for sending Ebola just in time to help them win in November and to counterbalance the facts of Obama’s monumental achievements he’s made while they have been willing to wreck the country to take the black man down. Here’s what they hope people’s irrational Ebola fears will obscure:

Evangelical “Christians” have been so stuck on putting a rope around this black man’s neck they have denied their faith and been the backbone of the lying Tea Party/GOP/Fox News cartel. They spawned the so-called “birthers” and the rest and now the evangelical right is jumping into the Ebola mess. For the Obama-hating, apocalypse-loving, “End Times”-loving freaks what could be finer by way of confirming all their xenophobic victimology than a global pandemic… carried by black people? After all these are the people who in the summer of 2014 demanded of Obama that they be exempted from basic civil rights laws protecting gay men and women.

And this “plague” arrived when an African-not-born-in-America-and-who-is-a-secret-Muslim-who-tried-to-do-socialism-and-do-homosexuality-to-US-real-Americans, is ruling us and taking away all our guns! And Ebola has arrived right when “those homosexuals” are getting married!

The response by the evangelical right to Ebola has been gleeful. Charisma magazine (who recently published then, after an outcry, took down, an article advocating genocide against all Muslims) jumped right in. In “Is Deadly Ebola Outbreak the First Bowl of ‘Revelation’ Judgment?” Jennifer LeClaire, the Charisma news editor, writes:

“Is the Ebola outbreak God’s judgment on the nation for immoral acts? And, if so, shouldn’t we expect it to spread to the doorsteps of Europe, Asia and America, whose citizens are practicing many of the same immoral sins? Or is this just one small piece of the bigger end-times picture?”

And Obama-hater Franklin Graham says that the Ebola virus is part of Bible prophecy and that Christians should be watching for signs of times indicating the end of the world. Graham also claims Christian persecution in America is on the rise, with the newest generation being overtly hostile toward Christians.

But who is the Christian here? President Obama never answered back to the disgusting southern right wing rubes from the former slave states that have tried to belittle, mock and stymie his presidency shouting “You lie” in a million ways, while actually meaning “You lie, nigger!” In fact President Obama has been a model of what I call “co-suffering love.”

I write about that love in my new book WHY I AM AN ATHEIST WHO BELIEVES IN GOD: How to give love, create beauty and find peace where I say, in response to the angry hate-filled white evangelical vision of the world: “Perhaps there is another possibility: Jesus’ co-suffering love is the best lens through which to reconsider God, or at least to reconsider ourselves.”

Americans are already treating immigrants from Ebola-ravaged countries like Liberia, Guinea and Sierra Leone like invaders from outer space. Then again these are the same folks that will accept any lie or government shutdown to defame and derail the uppity black who usurped the presidency. They also favor shooting immigrants at the border, turning back children and their world produces cops that shoot unarmed black men.

“People, once they know you are Liberian — people assume you have the virus in your body, which is not the case,” Alphonso Toweh, a man from Monrovia, told the Washington Post. He experienced this paranoia firsthand:

Alphonso Toweh was riding a bus when a man sitting next to him politely asked where he was from.

“Liberia,” said Toweh, a writer from Monrovia who is visiting the Washington area, home to the nation’s second-largest population of African immigrants.

“At that point, the man went far from me,” he said. “He did not want to come close to me. People, once they know you are Liberian — people assume you have the virus in your body, which is not the case.”

In Pennsylvania, a 16-year-old high school soccer player from West Africa, Ibrahim Toumkara, was tormented with chants of “Ebola” by opposing players during a game.

“There were tears coming down his eyes,” Edward Bachert, a Lehigh County police officer and Toumkara’s legal guardian, told WPVI. “He was visibly shaken by this; that it got to that level on the field.” The taunting  eventually led to a fight and the resignations of two rival coaches six days later. Welcome to Tea Party America!

For instance Fox News has been trumpeting numbers with banners such as there will be 10,000 new cases. Anyone watching would think they mean here. Of course these are projections in African countries.

Ebola panic was in the House Energy and Commerce Committee where Dr. Thomas Frieden, the head of the Centers for Disease Control and Prevention, and other health care officials testified.

Republicans demanded a travel ban. As of now, most of the public health community feels it would cause more harm than good. President Obama echoed that belief.  “I don’t have a philosophical objection necessarily to a travel ban if that is the thing that is going to keep the American people safe,” he said. “The problem is, is that in all the discussions I’ve had thus far with experts in the field—experts in infectious disease—is that a travel ban is less effective than the measures that we are currently instituting.”

Ebola only spreads through direct contact of bodily fluids. People infected with the disease are only contagious when they are displaying symptoms. But never mind the facts!

We Americans don’t like to admit who we often really are: ignorant racist bigots.

I’m ashamed for our country, a country my Marine son fought for in two stupid wars Obama worked to end. And I’m rooting for the best, smartest and most decent man who has been president in my lifetime.

The Ebola crisis will come and go. It will also be the next baseless lie used to try and do what the Republicans have tried unsuccessfully to do for the better part of 8 years: stop the black man in the White House from succeeding.

How low can the Republicans and their know-nothing supporters stoop while trying to take back the Senate? Ebola will prove there is nothing they won’t lie about, even if it causes a national panic that damages America. They will prove again that they hate the black man in the White House far more than they love our country.

October 21, 2014 "The god of the church had been made small and placed in a box..."
Recent Comments
0 | Leave a Comment
"Except that Rapture is not mentioned anywhere in the Bible, or in any other source ..."
Starsatyr Tim LaHaye is dead but his ..."
"Good article, but I believe a tad outdated now 4 years later. While the Moral ..."
Kirk Leavens An open letter to the Republican ..."
"Praying deconverted me. So yes, Christians, keep praying."
Captain Cassidy Evangelical and/or Post-Evangelical Christianity, “Progressive” or ..."
"ALL Christians voted for President Trump. On NOV 8 2016 the choice was do you ..."
Dry Loop The Case For Impeachment Grows
Browse Our Archives
get the latest from
News and Politics
Sign up for our newsletter
POPULAR AT PATHEOS News and Politics
1

Happy May
Over the past couple weeks, there's been a common theme - burnout....
view all News and Politics blogs
What Are Your Thoughts?leave a comment
Copyright 2008-2021, Patheos. All rights reserved.
error: Content is protected !!