Diary of a Pandemic Organist

After more than a year hiatus, I found myself sitting at the organ bench at Trinity Episcopal Church in Pawtuxet, RI on Palm Sunday. The organist and music director is out of commission for several weeks recovering from serious back surgery, and as I have done occasionally over the years, I am filling in until he can return. It’s not as if being a substitute music minister is a particularly heavy lift these days. Sunday services are limited to only 30 or so in the sanctuary, no singing, no choir, with the service sent out on Facebook Live. Play four or five hymns at appropriate times and call it a day. 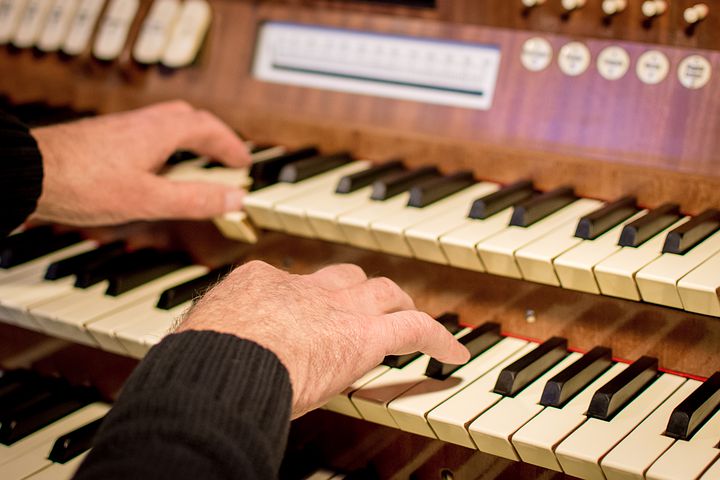 Still, I always return to the organ or piano with a certain amount of nervousness and trepidation. This is reflected in how I describe playing the organ to those who have never had the experience. Playing a pipe organ is “riding the beast,” something I liken in my imagination to riding a mechanical bull at a bar—not that I’ve ever done that or ever will. But each pipe organ—at least the dozen or so that I’ve played over the years—has its own personality, quirks, and pitfalls. Sort of like people. Learn its strengths and weaknesses, emphasizing the former and avoiding the latter as much as possible, and you will become close friends over time. Force it into your agenda or stereotype, or try to make it do something it doesn’t want to do, and an organ will make a fool of you in short order.

I am classically trained on the piano from the age of five, but only started playing the organ in my twenties. Until my final year in high school, my career plan was to be a concert pianist. There was no one moment when that changed, but it slowly dawned on me that although I had been contacted by an excellent music conservatory inviting me to apply for admission after high school, the odds of becoming a successful concert pianist are very small—similar to the odds of getting hit by lightning.

I was somewhat of a prodigy and star in the world I grew up in, but I grew up in Vermont. In other words, I was a large fish in a very small pond. I was good, but I was not that good. What do aspiring concert performers end up doing when it becomes clear that they will never climb to the top of performance Mount Everest? Many things, I suppose, including becoming an embittered, frustrated music teacher who continually thinks, along with Terry Malloy in “On the Waterfront,” “I could have been a contender!” I remember vividly the first time I saw the 1995 film “Mr. Holland’s Opus,” starring Richard Dreyfuss as a high school music teacher who once had much greater dreams for his life. I was just beginning my career as a college professor at the time; this movie gave me an alternative reality vision of how my life might have turned out. “Thank God that didn’t happen,” I thought. “That would have seriously sucked.” 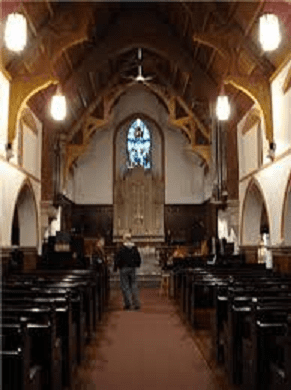 I learned to play the organ in my twenties at Saint Matthew’s Episcopal Cathedral in Laramie, WY. I was involved with the music ministry there during the years I was earning my Master’s degree at the University of Wyoming just up the street from the cathedral. According to the organist and choirmaster, the Saint Matthew’s organ, at the time of its installation in 1925, was the largest organ in the United States west of the Mississippi. I have no idea whether this is true, but it sounded cool.

The keepers of this glorious instrument were generous enough to allow me to get to know their pride and joy at my leisure. I am forever grateful, because I learned enough about organ playing to make, over the next several years in three different states, a supplemental income both as a substitute organist or, at times, a salaried organist also in charge of a choir. Over those years I played the organ at services ranging from Baptist to Catholic, Lutheran to Episcopalian, often remarking that I was happy to attend any church that was willing to pay me enough to do so. I suspect that many people who don’t play the organ might say the same thing.

A bit of organ vocabulary might be helpful. The organ at Saint Matthew’s Cathedral is described in the church’s propaganda as “featuring four manuals, 51 ranks, and 3,111 pipes.” A “manual” is a keyboard, and a “rank” is a row of pipes that all make the same sound but at different pitches. For comparison purposes, the pipe organ at Trinity that I am playing these days has two manuals and twenty-five ranks, while the Great Organ at Saint John the Divine Cathedral in New York City has four manuals, 151 ranks, and 8,514 pipes. One could say that the the St. Matthew’s organ is twice the organ that the one at Trinity is, while the Great Organ is three times the St. Matthew’s organ, but that wouldn’t be fair. Pipe organs, like people, come in all shapes and sizes–one needs to get to know and appreciate them for who they are rather than through comparisons.

Sitting at the organ bench is a little bit like what I suppose it’s like to sit in an airplane cockpit faced with dozens of mysterious switches, buttons, and gadgets. In the case of an organ, each of these switches connects you to a rank, creating a truly infinite universe of sound possibilities. No wonder the pipe organ has earned the title “King of the instruments.” The question is, how do I get this baby off the ground?

Once we moved to Providence because of my teaching position at Providence College 27 years ago, I went for more than a dozen years without playing the organ. We no longer needed the supplemental income, and I attended church infrequently. But through a confluence of events and friendships, we became connected with Trinity Episcopal about a decade ago, and got involved in various ways which included my revealing my past life as a church organist. Before long, I found myself in the role of go-to substitute organist when needed, a situation that continues to this day.

At 65 years of age, there are few things that make me nervous—but playing the organ is one of them. I mentioned this to Jeanne as we drove the fifteen minutes to church for Palm Sunday service; she observed that playing the piano or organ plugs into my perfectionist tendencies more directly than just about anything else I do. My nervousness is caused by the fact that I am a perfectionist who knows that my musical abilities and skills are a faint shadow of what they were back in the days when I thought I was going to be a concert pianist. It’s frustrating to know that, at best, my technical skills are at roughly the level that they were when I was ten or eleven years old. You never forget how to play once you have been trained, just as you never forget how to ride a bike. But the level of ability certainly declines without regular practice. I feel like a former Olympic bicyclist who now is happy when he manages to ride a bike without training wheels attached.

But as intimidating and nerve-wracking as playing the organ can be, I love it. Music has always had the ability to touch my emotions and my soul. My earliest memories include how Bach, Beethoven, Brahms, Mozart, and others have always caused a physical reaction—a tingling that runs down my back and arms. It wasn’t until I was in my 50s that I learned that this is my way of physically registering spiritual depths and the presence of the holy. My Easter Sunday hour at the organ bench was full of such bodily reminders that Big Bird is in the house.

So, the organ is a reliable conduit into my inner depths where the divine resides, as well as a vehicle to transcendent heights. One further thing I love about the organ is that, when attended to carefully, it makes me better than I actually am. As I often tell anyone who compliments me on my playing, the organ makes me sound as if I’m a much better musician than I truly am. This is not true of the piano—the piano reveals the pianist for exactly who she or he is. But patience, practice, and experience at the organ makes it possible to cover a multitude of sins.

There’s a spiritual lesson in there that I will need to meditate on and develop in future posts. Where are the places, what are the experiences, and who are the people who bring out the best in you and cause you to be better than you think you are? My father used to say that one should fill one’s life with people “whose faces light up when you enter the room.” Where, in your life, are you invited to stretch yourself, to press past your inhibitions, and make all kinds of music? I swear that, in some hidden place, I got a secret communication from the organ at Trinity when I turned it on for the first time in months ten days ago. “Where have you been, buddy? Let’s have some fun!” 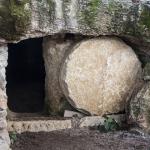 April 3, 2021
An Easter Warning: Jesus Isn't Walking Through That Door
Next Post

April 7, 2021 A Doubting Disciple and a Bunch of Communists
Recent Comments
0 | Leave a Comment
Browse Our Archives
get the latest from
Freelance Christianity
Sign up for our newsletter
POPULAR AT PATHEOS Progressive Christian
1