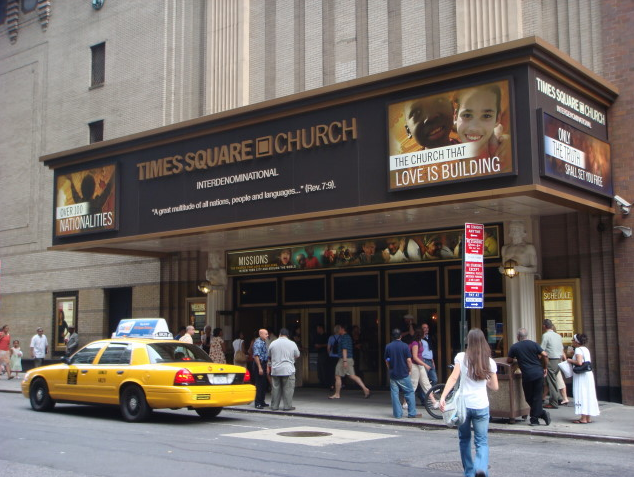 I wrote this article the day after David Wilkerson was killed in an accident in April of 2011, but was reminded of it on when I introduced my daughter to the church last week.  It’s still an amazing church, where Pastor Wilkerson’s legacy lives on!

In New York, I attended an interdenominational church located at 51st and Broadway called Times Square Church, even though the blue awning over the entrance proclaimed “The Church that Love Is Building.” I mean, honestly. Love? In a church? It seemed a little far-fetched to me, but over 8,000 people gathered to worship in the old Broadway theater every week, some of them driving more than two hours and staying for all three services. Being in New York was so spiritually disorienting for this southerner that had there been tire swings instead of pews or jugglers instead of a preacher, I wouldn’t have noticed.

Times Square Church is a “charismatic” church, meaning they believed in healing, visions, prophecy, etc. Over a hundred nationalities worshipped there, however, and I couldn’t tell the “tongues of angels” from Swahili. My high-school Latin didn’t help — since no one was singing Happy Birthday — and the disparate languages melded into what I imagined to be the very sound of holiness. It contrasted jarringly with the neon decadence of the surrounding Times Square. In some churches, people arrive early to shake hands, talk about work, and drink coffee. But these congregants came to pray, books embossed with the words Heilige Schrift or Santa Biblia opened in their laps. In fact, a half hour before the opening song, only balcony seats would still be available. I never saw the main floor up close.

But what I could see startled me. The faithful were down there, crowding the stage, raising their hands in prayer. There was an elderly black man who stood on the floor to the left of the podium who simply yelled “Jesus! Jesus! Jesus!” over and over until the service began. (And even intermittently through the sermon.) His staccato chant combined with the anguished prayers of women either terrified me or electrified me, but either way I was content to observe from the balcony.

Pastor David Wilkerson had founded the church, but he was also famous for his 1963 bestseller The Cross and the Switchblade and for founding Teen Challenge. The first time we were there, he said, “Ladies, when we stand to sing, please don’t leave your pocketbooks on the ground. Some thieves are here in the sanctuary, so keep an eye out on your belongings. And for those of you who came here expressly to steal,” he said, “we welcome you. You came here thinking you’d leave with a few bucks, but you’ll leave knowing the life-changing love of God. Stay as long as you’d like.”

A hundred people would respond to his messages by crowding the stage where Pastor David gently prayed, arms outstretched like he was receiving his grandchildren. Every week, his sermons caused mobs of weeping people to come forward, from the balconies, from the main floor, and even from the “overflow” room where people watched him on television screens. Times Square Church emphasized giving aid to the poor, the hungry, and the addicted, so the congregation was always full of strange-looking people. One Sunday you might sit between an investment banker who graduated from Princeton on the right and an unemployed garbage collector on the left. In the middle of one sermon, Pastor David asked anyone who had attempted suicide or been addicted to drugs to stand. Hundreds, from every economic level, got out of their seats — men in ties, men in short-sleeved polyester blends, and men with hair so greasy it stained their already soiled shirts. This church did not overlook sin in order to maintain the appearance of godliness. It was after the real thing, challenging you to look deep into your soul and extricate hidden vice. If Jesus was the Great Physician, then this church was the hospital, filled with hurting people staggering under the weight of their problems.

I used to think that if anything deserved contempt in the church, it was “emotionalism” — a catchall phrase to describe anything that deviated from the standard two hymns, a prayer, another hymn, and a 22-minute sermon. Certainly, you could be thankful Jesus died for your sins, but showing it in any way other than a furrowed brow during communion demonstrated nothing but a weak mind. Even though Times Square Church was miles away from my Tennessee church — in more ways than geographically — I felt at home there, in my red velvet seat, sitting in the sometimes uncomfortable presence of God. I closed my eyes during “Amazing Grace,” heard people all around me singing in their native tongues, and knew exactly what Heaven would sound like.

I went to church twice a week, and sat in the balcony, straining my eyes to see Pastor David in his little blue suit. Many years later, I saw a headshot of him in a magazine and had no idea who he was; I only knew his voice.

That voice. It exuded the goodness of God for almost 70 years, boiling down abstract theological concepts into practical help for thousands of New Yorkers. In its soft timbre, you could imagine it soothing mourners, reprimanding children, and advising hopeful newlyweds. Pastor David frequently forgot to turn off his lapel microphone, broadcasting his voice over the whole sanctuary while people rushed forward for prayer — eager to repent or keen on getting him to stop singing. His voice skipped notes, butchered lyrics, and fumbled over Bible passages. It wasn’t silky like a newscaster’s, and frequently cracked under the strain of compassion. When angry, it split open your soul, like a disappointed grandfather who finds you smoking behind the barn. It was strong and commanding, yet delivered the Gospel with the delicacy and tenderness of a child. And when it erupted into laughter, it was like rain on window sills, as light and sweet as cotton candy.

Though that voice will still be heard on the thousands of sermons recorded over his years at the church, Pastor David’s time on earth ended when he was killed Wednesday in a car accident on U.S. 175 in Texas. He veered his car, also carrying his wife Gwen, into the pathway of a tractor trailer going westbound. (She was taken to the hospital, as was the driver of the tractor trailer.) Before he died, the 79-year-old blogged:

To those going through the valley and shadow of death, hear this word: Weeping will last through some dark, awful nights — and in that darkness you will soon hear the Father whisper, ‘I am with you. I cannot tell you why right now, but one day it will all make sense. You will see it was all part of my plan. It was no accident. It was no failure on your part. Hold fast. Let me embrace you in your hour of pain.’ Beloved, God has never failed to act but in goodness and love. When all means fail — his love prevails. Hold fast to your faith. Stand fast in his Word. There is no other hope in this world.

See more on the Faith and Family Channel

Letter to the Church from a Military Wife

Three Theological Questions about Christianity, Orthodoxy, and the LDS Church

April 26, 2012 I’m a White Republican Raising a Black Child: Deal With It
Recent Comments
0 | Leave a Comment
"and what makes this even better is that the two girls are sisters http://www.huffingtonpost.c..."
d Black activists cried "racism" over this ..."
"It's heart wrenching to hear about this. Our country is getting more vile and depraved ..."
BlackSun Syndicate Target proudly welcomes men to use ..."
"a wolf dressed as a sheep is still a wolf - if u have a ..."
Aussie In Austin Target proudly welcomes men to use ..."
"I am picturing a little turd in pajamas sipping coffee."
Cantbelieveyouthinkthis Los Angeles Craigslist ad somehow captures ..."
Browse Our Archives
get the latest from
Politics Red
Sign up for our newsletter
POPULAR AT PATHEOS Politics Red
1 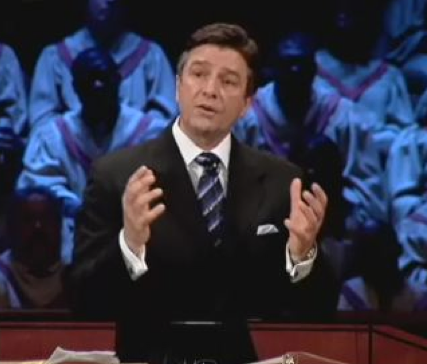