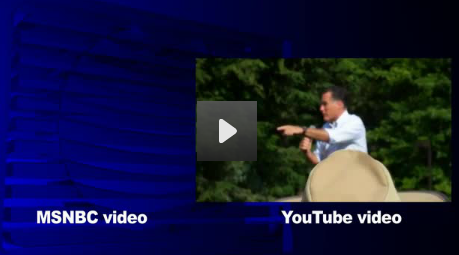 I’m a big fan of WaWa and so is Gov. Romney.  This, however, I don’t appreciate.

NBC is taking heat again for selective editing a day afterpresenting video of Mitt Romney seemingly awestruck by the process of ordering a sandwich at a convenience store.

During an afternoon broadcast of “Andrea Mitchell Reports,” video of the GOP presidential candidate seemed to show a politician out of touch as he discussed ordering a hoagie at Wawa.

Thankfully, someone was at the speech filming it live.  You’ll be amazed at the NBC doctored clip and the real clip.

June 24, 2012 Rejecting her Mother's Feminism
Recent Comments
0 | Leave a Comment
"and what makes this even better is that the two girls are sisters http://www.huffingtonpost.c..."
d Black activists cried "racism" over this ..."
"It's heart wrenching to hear about this. Our country is getting more vile and depraved ..."
BlackSun Syndicate Target proudly welcomes men to use ..."
"a wolf dressed as a sheep is still a wolf - if u have a ..."
Aussie In Austin Target proudly welcomes men to use ..."
"I am picturing a little turd in pajamas sipping coffee."
Cantbelieveyouthinkthis Los Angeles Craigslist ad somehow captures ..."
Browse Our Archives
get the latest from
Politics Red
Sign up for our newsletter
Related posts from The French Revolution