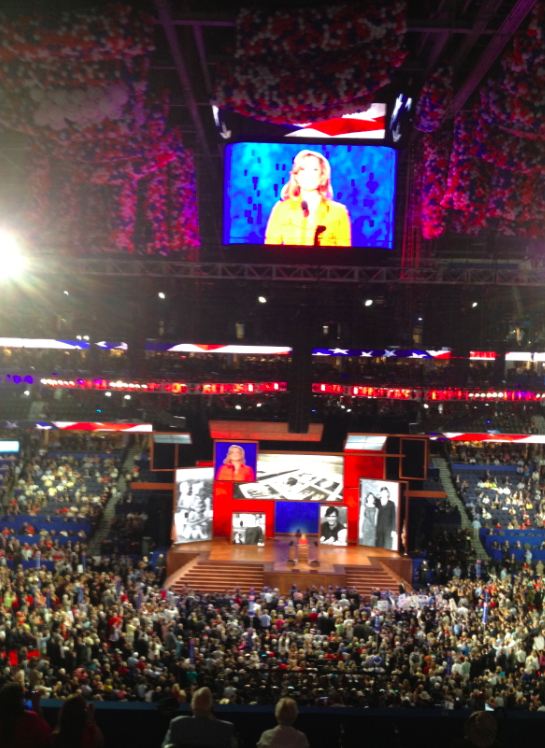 1.  This is my first convention, and I’m struck by the difficulty in assessing the success of the day.  I can tell you who energized the convention hall, but I can’t tell you how it looked on TV, and aside from my Twitter feed, I was completely disconnected from the commentary (a good thing, perhaps).  At any rate, while I enjoyed Chris Christie’s keynote overall and admire what he’s accomplished in New Jersey, I may agree with Andrew McCarthy’s criticism — there was an awful lot of “I” and “me” in the speech.  Yes, bravado is his style, but it was just a bit off-putting in person, especially compared to Ann’s speech. Which bring us to . . .

2.  This was Ann Romney’s night.  While there is convention tension between “establishment” and “grassroots,” there was total unity in the hall when Ann spoke.  Everyone was rooting for her.  You could feel the crowd urging on the speaker, encouraging her, cheering her every applause line.  I don’t know how things came across on camera, but inside the hall, there was truly unique combination of warmth and sheer excitement.

4.  It was a joy to vote to approve a party platform that so clearly and unequivocally commits the entire party to defending the unborn.  Abortion is the great moral tragedy of our time, and it is a blessing that at least one of our major parties is growing ever-more-committed to defending our most vulnerable citizens.  I pray the other party abandons its equally-unequivocal commitment to granting citizens the right to kill the innocent.

One final thing note: I can’t count the number of readers we’ve met since we’ve arrived.  It is a joy to see you, and please if you see a balding lawyer-looking guy with a very attractive wife wearing an “Evangelicals for Mitt” button, don’t hesitate to come say hello.

August 28, 2012
The Moment Gov. Romney Earned Enough Delegates to Put Him "Over the Top!"
Next Post

August 30, 2012 Three Quick Takeaways from RNC Day Two
Recent Comments
0 | Leave a Comment
"and what makes this even better is that the two girls are sisters http://www.huffingtonpost.c..."
d Black activists cried "racism" over this ..."
"It's heart wrenching to hear about this. Our country is getting more vile and depraved ..."
BlackSun Syndicate Target proudly welcomes men to use ..."
"a wolf dressed as a sheep is still a wolf - if u have a ..."
Aussie In Austin Target proudly welcomes men to use ..."
"I am picturing a little turd in pajamas sipping coffee."
Cantbelieveyouthinkthis Los Angeles Craigslist ad somehow captures ..."
Browse Our Archives
Follow Us!