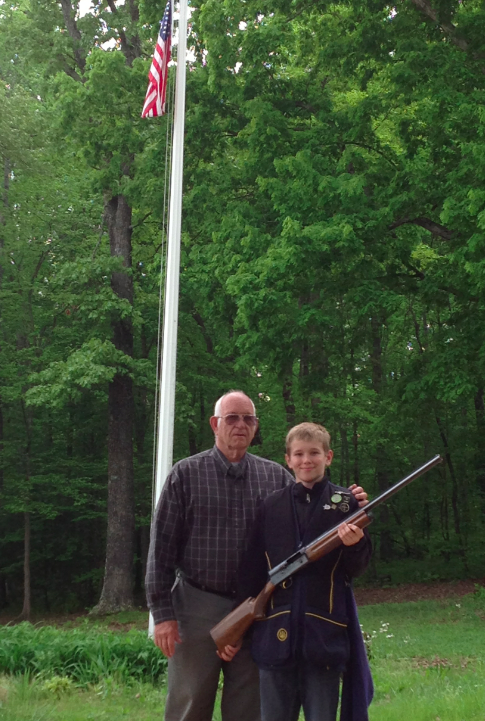 My dad Bob Anderson of Paris, Tennessee is a wonderful father and grandfather. I was reminded of this fact again recently when he gave my son Austin a Browning light 12 gauge, Gold trigger Belgium-made improved cylinder barrel.  He bought this gun in 1972 when he and my mom first moved to McMinnville from Cookeville, Tennessee.  A man from church named Frank had it for sale.

Frank was the type of guy who enjoyed buying and selling guns.  “Listen,” he told my dad.  “You go up to the hardware store where they have about ten new shotguns.  If you find another shotgun with wood grain better than mine I’ll give mine to you.”

So, my dad bought it and said he’s never seen a nicer grain.  Dad’s kept it in perfect condition over the years.

In fact, once I went to Holly Fork shooting range in Paris with my dad.  We were shooting, and Daddy wasn’t hitting many — he prefers rifles and pistols.  An old guy came up and admired Daddy’s gun.  He said, “that’s a nice gun you have there.  Too bad you don’t know how to shoot it.”

Anyway, happy father’s day to the man who bought a great gun in 1972 and saved it for his grandson in 2013.  I hope Austin grows up to have the same love of God, church, and country like you’ve always had.

I love you, Daddy!

June 13, 2013
Christianity Is Not a Religion of Peace, Thank God
Next Post

June 18, 2013 Killing Your Child for Volleyball
Recent Comments
0 | Leave a Comment
"and what makes this even better is that the two girls are sisters http://www.huffingtonpost.c..."
d Black activists cried "racism" over this ..."
"It's heart wrenching to hear about this. Our country is getting more vile and depraved ..."
BlackSun Syndicate Target proudly welcomes men to use ..."
"a wolf dressed as a sheep is still a wolf - if u have a ..."
Aussie In Austin Target proudly welcomes men to use ..."
"I am picturing a little turd in pajamas sipping coffee."
Cantbelieveyouthinkthis Los Angeles Craigslist ad somehow captures ..."
Browse Our Archives
Related posts from The French Revolution