So, on the 50th anniversary of Martin Luther King’s “I have a dream” speech, we’re reduced to this: calling Miley Cyrus’s predictable, boring, and pathetic VMA dance routine “racist.” Yes, racist. Don’t believe me?  Read this, this, this, and this. How did Miley offend the racial police? By dancing like a stripper.  I kid you not:

Cyrus, though, twerked the formula as well as her body by adding in a racial element while she copied the dance moves of strippers and bellowed her love of drugs. (Billy Ray’s heart must be pretty achy breaky these days.) On stage as well as in her video she used the tedious trope of having black women as her backing singers, there only to be fondled by her and to admire her wiggling derriere. Cyrus is explicitly imitating crunk music videos and the sort of hip-hop she finds so edgy – she has said, bless her, that she feels she is Lil’ Kim inside and she loves “hood music” – and the effect was not of a homage but of a minstrel show, with a young wealthy woman from the south doing a garish imitation of black music and reducing black dancers to background fodder and black women to exaggerated sex objects.

Or, here’s another take:

Last night, as Cyrus stalked the stage, mugging and twerking, and paused to spank and simulate analingus upon the ass of a thickly set African-American backup dancer, her act tipped over into what we may as well just call racism: a minstrel show routine whose ghoulishness was heightened by Cyrus’s madcap charisma, and by the dark beauty of “We Can’t Stop” — by a good distance, the most powerful pop hit of 2013.

A doctoral dissertation could (and will) be written on the racial, class, and gender dynamics of Cyrus’s shtick. I’ll make just one historical note. For white performers, minstrelsy has always been a means to an end: a shortcut to self-actualization.

Let’s leave aside for the moment that these writers seem to deny the full moral agency and willing participation of the black backup dancers in Cyrus’s shameful spectacle and focus instead on the assumption that the trashy, stripper-inspired dance moves combined with the hyper-sexualized realm of hip-hop represents “black culture.”

News flash: It’s a subset of ghetto culture, not black culture.  Plus, equating blackness with public exhibitionism and crude sexuality? Well, some could call that racist. It’s no secret to readers of this blog that our youngest daughter is black (African-American in the most literal sense; born in Ethiopia), and it will be a cold day in hell before she is even one percent “ratchet” or whatever other term-of-the-moment that ridiculous-sounding elitist liberals love to toss around like they have the foggiest idea what “the streets” are really like.

Looking across American (much less world) history, black Americans have no shortage of inspiring role models — including great musicians — and the idea that any black child should be taught that something so base as twerking is part of their culture because of the color of their skin is nothing short of outrageous.  It’s dangerous as well, creating downward social pressures on young black kids as the wider pop culture tells them their authentic selves are to be found in the violent, hyper-sexual world of hip-hop rather than, say, Gospel music or other forms of expression.

In the Wall Street Journal, Juan Williams, powerfully expressed his displeasure with the ascendance of hip-hop, and in so doing he shows how there’s nothing inevitably or necessarily “black” about it.  Contrasting the music of the march on Washington with music that dominates the airwaves today, he writes:

Curtis Mayfield—also openly inspired by the music of the march—wrote an even more hopeful song: “People Get Ready.” It, too, picked up on a frequent image of American folklore, the train of salvation.

Just as Woody Guthrie and Johnny Cash had sung “This Train’s Bound for Glory,” Mayfield, a black Chicago singer steeped in church gospel music and the blues, sang about faith in the American struggle for racial justice.

“People get ready, there’s a train a comin’; you don’t need no baggage you just get on board . . . there ain’t no room for the hopeless sinner who would hurt all mankind just to save his own. Have pity on those whose chances grow thinner. For there’s no hiding place against the Kingdom’s throne.”

The uplifting lyrics made “People Get Ready” one of the earliest hits on both black and white radio. Bob Marley later used some of the words in his poignant song “One Love.” Bruce Springsteen used the song as a healing anthem at concerts after the 9/11 terror attacks.

Now, half a century after the lyrical promise of that inspiring music and poetry, there is the inescapable and heartbreaking contrast with the malignant, self-aggrandizing rap songs that define today’s most popular music.

In Jay-Z’s current hit, “Holy Grail,” he sings about “psycho bitches” and uses the n-word seven times while bragging that he is “Living the life . . . Illest [n-word] alive.” Another top rapper, Lil Wayne, released a song in the spring with an obscenity in the title, using the n-word repeatedly and depicting himself as abusing “hoes” and “bitches.”

Miley Cyrus racist?  No, she’s a foolish young girl on a sad and destructive downward spiral.  It’s a movie we’ve seen too many times before.  Soon her fifteen minutes will be up, and we’ll be chattering about the next wave of Disney starlets gone bad.

But mainstreaming stripper culture and even labeling it “black”?  That’s far, far worse than any MTV performance.

August 29, 2013 If You Send Your Kid to Private School, Are You a Bad Person?
Recent Comments
0 | Leave a Comment
"and what makes this even better is that the two girls are sisters http://www.huffingtonpost.c..."
d Black activists cried "racism" over this ..."
"It's heart wrenching to hear about this. Our country is getting more vile and depraved ..."
BlackSun Syndicate Target proudly welcomes men to use ..."
"a wolf dressed as a sheep is still a wolf - if u have a ..."
Aussie In Austin Target proudly welcomes men to use ..."
"I am picturing a little turd in pajamas sipping coffee."
Cantbelieveyouthinkthis Los Angeles Craigslist ad somehow captures ..."
Browse Our Archives
Related posts from The French Revolution 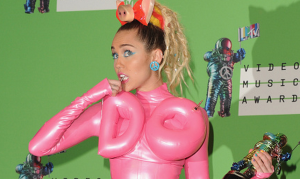 Politics Red
Don’t Tell MTV, But It’s Been Boring for...
The French Revolution