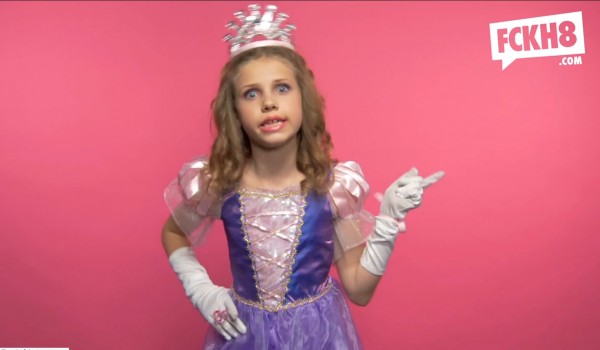 A feminist website created by a group called FCKH8 made a video to sell their t-shirts, by dressing little girls up in princess costumes and having them swear at the camera.  These “potty-mouthed princesses” dropped the F-bomb 14 times in 2 and a half minutes. By the way, all of them are under 13 years old.

The girls yell at the camera about 3 “words more offensive than F***” – “pay inequality,” “rape and violence,” and “be pretty.”

First they repeat the common “statistic” that women are paid 25% less than men for the same work — which liberals love to repeat, but has been repeatedly debunked. Then they yell about rape statistics (obviously inappropriate conversation for little girls) and complain about only being valued by their looks. All with quite a bit of attitude.

Then at the end, a woman says, “Instead of cleaning these girls’ mouths out with soap, maybe society should clean up its act!” This “in a voice so condescending,” Christine Sisto at National Review Online wrote “it took all of my strength not to slap my computer across the face . . . er, screen.”

The website claims that making little girls swear like sailors is to make things better for women in our country. How does the website do this?  They claim to donate $5 from each t-shirt sale to supports charities “fighting every day to make the world more equal for women and girls.”  (The website fails to name any charities they support – just a list of celebrities that endorse their t-shirts.)

Here’s the truth: “FCKH8.com likes to pretend that it’s driven by a social-justice mission but it’s really just out to make a buck off of politically correct causes.”  And now they’re back with part two, this time on domestic abuse. The girls swear some more AND are made up to look like they’ve been beaten.

I don’t know what’s worse – the hypocrisy, making little girls say bad words to serve your own political agenda, exploiting them for a profit, or spreading lies about the treatment of women in this country. Just go to North Korea or pretty much any country in the Middle East, people, and you’ll see what real oppression is. How about speaking up for the women there?

Can you imagine the parents of these young girls who let their kids take this particular acting job?  Probably standing close by, approvingly watching their kids drop the F bomb repeatedly.

Must be a proud parental moment.

The people who made the video claim it’s not possible to get people talking about these important issues without using the F-word.  Here’s how director Luke Montgomery, defended himself to Entertainment Tonight:

How exactly are people supposed to focus on the statistics (which are incorrect anyway) when they’re hearing the F-word every 10 seconds? They made the video to get attention, and they’re getting it… but viewers aren’t focusing on the issues, they’re focusing on the method.

Which is correctly being called disturbing, vile, and crass.

December 10, 2014 The Democrats’ ‘Torture Report’ Is a Dangerous, Partisan Mess
Recent Comments
4 Comments | Leave a Comment
"and what makes this even better is that the two girls are sisters http://www.huffingtonpost.c..."
d Black activists cried "racism" over this ..."
"It's heart wrenching to hear about this. Our country is getting more vile and depraved ..."
BlackSun Syndicate Target proudly welcomes men to use ..."
"a wolf dressed as a sheep is still a wolf - if u have a ..."
Aussie In Austin Target proudly welcomes men to use ..."
"I am picturing a little turd in pajamas sipping coffee."
Cantbelieveyouthinkthis Los Angeles Craigslist ad somehow captures ..."
Browse Our Archives
Related posts from The French Revolution