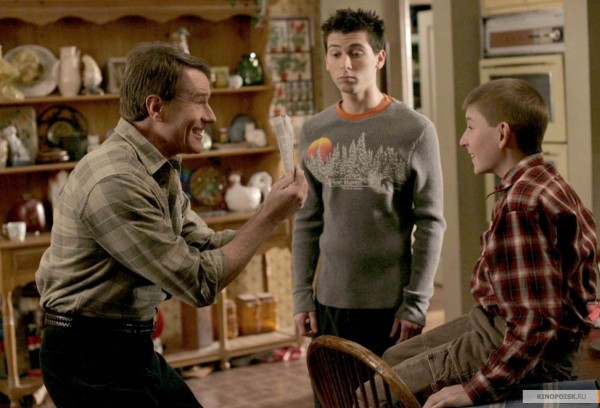 Sometimes it’s hard to find a show that everyone in the family can enjoy, so I have a feeling you’re about to thank me.  Remember the show Malcolm in the Middle that began in 2000?  It’s much better than you remember, and it might be a good option for your family’s viewing pleasure.

The story revolves around a family of four boys who, well, behave like boys.  Hal (Bryan Cranston) is the hapless but well-meaning father. His overbearing wife Lois (Jane Kaczmarek) is a type of “tough love” mother who somehow manages to be able to go toe-to-toe with her incredibly creative and mischievous boys.  Francis (Christopher Masterson) is the oldest brother who is sent away to military school. Genius Malcolm (Frankie Muniz), bully Reece (Justin Berfield), and cutie Dewey (Erik Per Sullivan) are the three brothers who round out the utter chaos at home.

If you’re looking for shows to watch with the kids, you could do much worse than this vibrantly creative show.  Here’s why:

1.  Bryan Cranston, who later became Walter White on Breaking Bad, does a masterful job portraying a loving but sometimes frazzled father.  Seeing him in a comedic role really allows you to appreciate his range as an actor.

2.  Because it was created in 2000, it seems less affected by the limitations of political correctness.  One can imagine the scenes of normal boyish fighting would never get through today’s editing process.

3.  Mike Judge says he mined the show Malcolm in the Middle to get inspiration for his hilarious show Silicon Valley.

4. The family dynamic is so dysfunctional, it’s bound to make you feel better about your own.  This is no typical family found in Disney shows. Instead, the parents are mistrustful, overbearing, suspicious, and sometimes wrong.  The kids suffer all kinds of humiliation, which makes the theme song — which ends with “Life is unfair…” — just perfect.

If you decide to watch the show, I’d love to know how your family likes it.  Also, what other shows have your kids enjoyed?

August 25, 2015 Satanists Drench Women in "Breast Milk" to Protest "Forced Motherhood" & Support Planned Parenthood
Recent Comments
0 | Leave a Comment
"and what makes this even better is that the two girls are sisters http://www.huffingtonpost.c..."
d Black activists cried "racism" over this ..."
"It's heart wrenching to hear about this. Our country is getting more vile and depraved ..."
BlackSun Syndicate Target proudly welcomes men to use ..."
"a wolf dressed as a sheep is still a wolf - if u have a ..."
Aussie In Austin Target proudly welcomes men to use ..."
"I am picturing a little turd in pajamas sipping coffee."
Cantbelieveyouthinkthis Los Angeles Craigslist ad somehow captures ..."
Browse Our Archives
Related posts from The French Revolution