#GOPDebate: Does Trump have a point? Are the audiences packed with anti-Trump lobbyists and donors?

If you are watching the debate right now, you might hear something over and over.

During the last debate, the audience booed every time Donald Trump opened his mouth.  Tonight, it seems like he has at least some fans there, but he’s already mentioned that Cruz and Rubio have packed the audience.

The Washington Post recently quoted Trump complaining about the audiences being packed into the seats:

“Let me just tell you,” he said, as the crowd there booed him, “we needed tickets. You can’t get them. You know who has the tickets for the — I’m talking about, to the television audience? Donors, special interests, the people that are putting up the money.”

Trump has also tweeted this as well:

Tickets for future debates should be put out to the general public instead of being given to the lobbyists & special interests – the bosses!

So, does he have a point? The Washington Post dug around:

WYFF-TV in Greenville, S.C., explained how tickets for the most recent debate were allocated. Chad Groover, chairman of the Republican Party in the area, said that “he gave tickets to supporters, including elected officials, who work hard for the party.”

That may explain why Trump was received with such hostility. First of all, it doesn’t take much booing to sound like a lot of booing. I don’t have scientific data on this, but it seems pretty obvious. It’s like people being rude online: It takes only a few to drown everyone else out.

Second, at least 500 people were there — 100 from each of the five non-Trump campaigns — with a vested interest in razzing the front-runner. Depending on your definition of “establishment,” more than half of those people were there to cheer on someone who comes from the Republican Party’s mainstream. Add on top of that a cluster of folks from the local party — people who almost certainly are more likely than not to adhere to the establishment’s view of Trump — and you’ve got more than enough people to build up a decent head of steam on some heckling.

Tonight seems a bit different — it seems like he’s already getting more applause than the last debate.  But, according to the Washington Post, he does have a point. 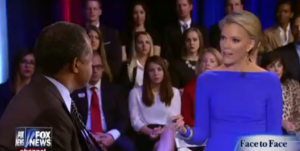 February 26, 2016 GAUNTLET THROWN DOWN: Rubio mocks "con artist" Trump's misspelled tweets, makeup, age, and backstage fits
Recent Comments
0 | Leave a Comment
"and what makes this even better is that the two girls are sisters http://www.huffingtonpost.c..."
d Black activists cried "racism" over this ..."
"It's heart wrenching to hear about this. Our country is getting more vile and depraved ..."
BlackSun Syndicate Target proudly welcomes men to use ..."
"a wolf dressed as a sheep is still a wolf - if u have a ..."
Aussie In Austin Target proudly welcomes men to use ..."
"I am picturing a little turd in pajamas sipping coffee."
Cantbelieveyouthinkthis Los Angeles Craigslist ad somehow captures ..."
Browse Our Archives
Follow Us!